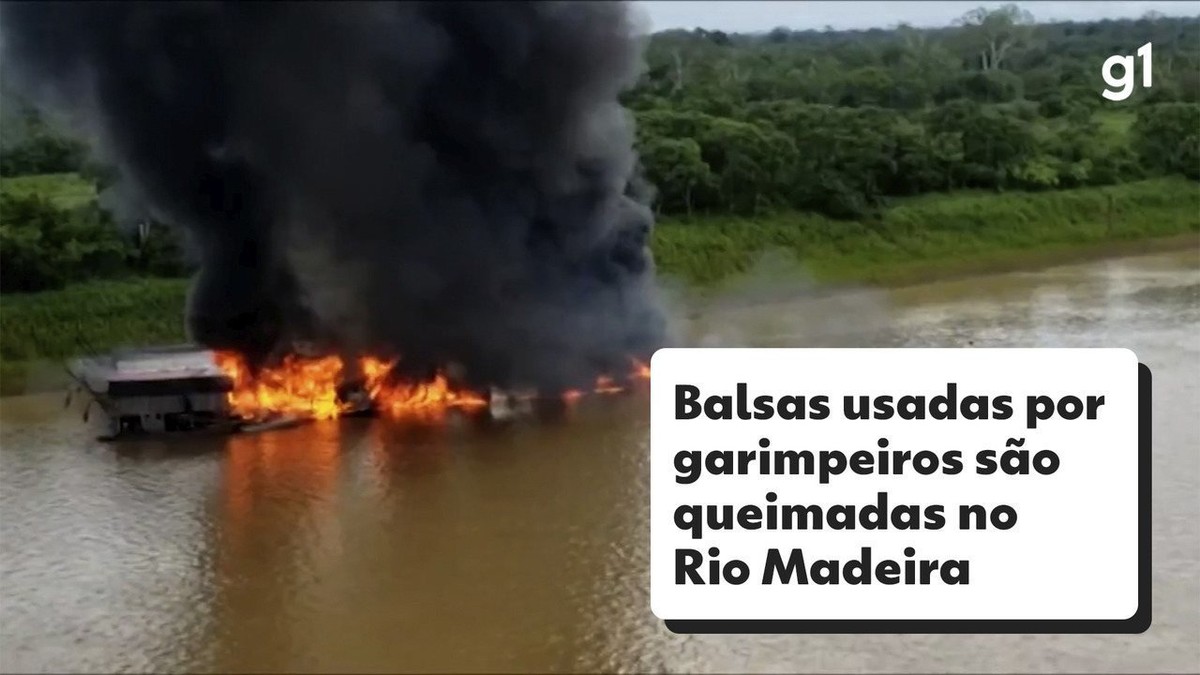 31 rafts used by illegal miners were burned on the Madeira River, this Saturday (27), during an operation against illegal gold mining in the region – watch the video above. The boats were abandoned in the river, and only one man was found and arrested.

Portions of gold and mercury were seized. Operation Uiara was carried out by the Federal Police, with support from the Brazilian Institute for the Environment and Renewable Natural Resources (Ibama) and the Brazilian Navy.

In recent weeks, hundreds of rafts and dredgers have docked at a single point on the Madeira River, for massive exploration of gold. The miners dispersed from the site on Friday (26), but some continued to operate illegally.

Rafts were destroyed on the Madeira River this Saturday (27). — Photo: Disclosure

Gold seized in the Madeira River by agents of Ibama and PF. — Photo: Karla Mendes/g1 AM

The Public Ministry of Accounts called the Federal Court of Accounts (TCU) to investigate a possible omission by inspection bodies in the fight against illegal mining on the Madeira River, in the interior of Amazonas.

In the application, the Public Ministry asks that the investigation be geared, especially, to the performance of the Federal Police and Navy of Brazil.

Hundreds of dredges dock on the Madeira River, near the municipality of Autazes. — Photo: Silas Laurentino

The presence of miners frightened community residents on the Madeira River, in Amazonas. — Photo: REUTERS/Bruno Kelly

The miners began to disperse on Thursday (25), and dismantled the floating village on Friday (26), after the images reverberated in the press and the government promised an action to combat illegal mining.

Greenpeace Brazil activist Danicley Aguiar claims that this dispersion is part of a strategy by the miners to make inspection more difficult.

“The announcement of this operation, promised by the federal government, ended up making it easier for them to build an escape plan from the region. It allowed the dispersion of these dredgers, which makes the fight against this activity even more difficult,” he said.

Residents of the Bonfim Community, which is located on the banks of the Madeira River, in the interior of the Amazon, fear that the presence of miners in the region could cause river pollution and fish contamination.

The community is just minutes from the town of Autazes. According to residents, about 20 families live in the area and they survive on the use of river water and the fish that are fished both for consumption and for sale.

The mercury used in illegal mining activities in the Madeira River is capable of causing damage to the organs of people who eat contaminated fish every day, as they have more chronic symptoms of the ore in the body.

Physician and researcher in Public Health at the Oswaldo Cruz Foundation (Fiocruz), Paulo Cesar Basta, explained to g1 that the mercury used by miners sinks into the river bed and, consequently, is consumed by fish.

“At the bottom of the river, it undergoes a process of chemical transformation mediated by a microorganism. It transforms into an even more toxic chemical form, methyl mercury, and enters the food chain of this fish,” he said.

The traditional peoples of the Amazon have a food habit that is very marked by the consumption of fish. According to Basta, communities that eat contaminated fish every day are also at high risk of contamination.

“If you eat fish contaminated by mercury daily, two or three times, the body does not have time to eliminate it, and it accumulates. In this way, it causes damage to organs, mainly in the brain, kidneys, liver, and heart” .

One of the fishermen who lives in the Bonfim Community is 33-year-old Rosana Trindade. She said that the residents’ routine is to leave at 5 am to fish and return in the afternoon, from the Madeira River, which passes in front of the community.

“I was afraid. They use these things to put in water. Our profession is fishing and I thought ‘hey, it’s going to harm our fish closer and closer’. Over there (other areas of the river) they are already working on it. They will be closer, they will harm our fishing more”, said Rosana.

Mining in the Amazon: understand how dredges extract gold and what happens in rivers

The most watched videos from Amazonas