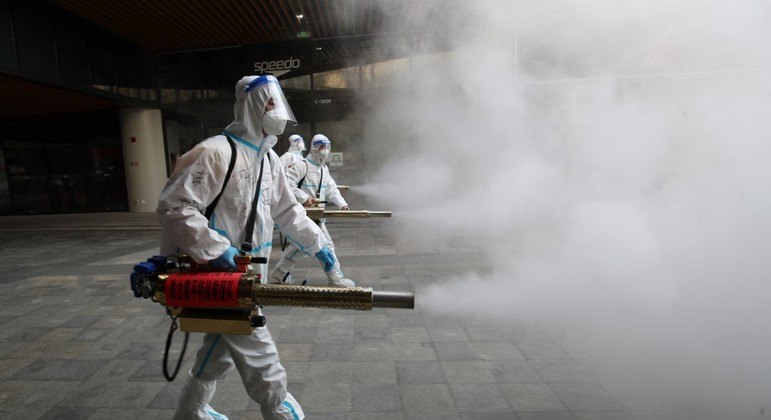 China on Tuesday confined residents of a third city as the country grapples with multiple outbreaks of Covid-19 on the second anniversary of the first death from the pandemic.

Since that January 11, 2020, when the disease still did not have a name, Covid-19 has caused almost 5.5 million deaths in the world, which again adopts restrictions to stop the advance of the new variant Ômicron.

In China, which brought the initial outbreak under control in Wuhan with lockdowns, border closures and mass testing, the spread of new outbreaks prompted authorities to reinstate strict measures weeks before the start of the Beijing Winter Olympics.

Authorities in the city of Anyang in central Henan province ordered its 5 million residents to stay at home on Monday night and not drive private vehicles, the official Xinhua news agency reported.

Like them, 1 million people have been confined since last week in Yuzhou, in the same province, and 13 million in the historic city of Xi’an, which has entered its third week of confinement.

China on Tuesday recorded 110 new local cases of Covid-19, a tiny number compared to the hundreds of thousands that emerge daily in countries like the United States.

Still, the strategy in China is one of utmost prudence, especially in the run-up to the Beijing Winter Games. The event takes place from February 4th to 20th, surrounded by strict sanitary protocols.

Following the same approach, the semi-autonomous city of Hong Kong today announced the suspension of pre-school and primary education until early February.

Japan, meanwhile, extended tough border restrictions that prevent almost all arrivals from abroad until the end of February. It also announced the reopening of mass vaccination centers, in the face of an increase in cases linked to Ômicron.

Health experts insist that vaccines remain the most effective weapon against the pandemic, although the anti-vaccine movement gained attention with the case of tennis player Novak Djokovic.

The Serbian won the legal battle against his deportation from Australia for not being vaccinated and, on Tuesday, he trained for the first time at the venue where the Australian Open takes place. He hopes to participate in the tournament within a few days if the authorities do not cancel his visa once again.

In Bolivia, thousands of people marched in La Paz, on Monday (10), against the new vaccination card imposed to gain access to public places. At the moment, it is suspended, because its entry into force has saturated the vaccination centers.

“They are forcing us to use these experimental vaccines,” said Gregorio Gómez, a community leader who participated in the 12 km march between the city of El Alto and La Paz.

Italy also applies, since Monday, measures against the unvaccinated, who will not be able to use a wide variety of public transport, nor enter restaurants, gyms and cinemas.

“Most of the problems we face now are linked to people who have not been vaccinated,” Prime Minister Mario Draghi said.

In Mexico, President Andrés Manuel López Obrador reported that he contracted the disease for the second time, although he has only mild symptoms.

Good news came from the pharmaceutical side. On Monday, Pfizer announced that it expects to have a specific version of its Omicron variant vaccine by March.

And the European Union’s drug regulator said the same day that it expects to approve the lab’s anti-Covid pill in a few weeks.