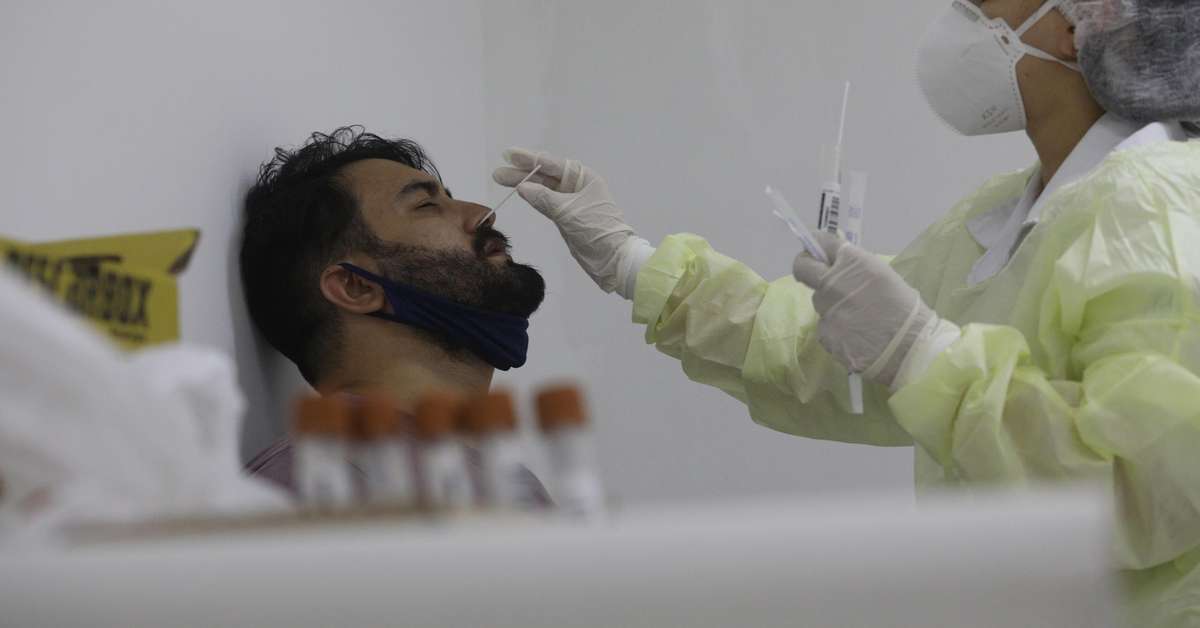 At least 13 states had an increase in the number of hospitalizations for covid-19 or suspected disease in Intensive Care Units (ICU) and wards compared to the end of last year. The increase in hospitalizations occurs after the holiday season and amid the advance of contamination by the Ômicron variant, which is more transmissible.

Specialists have been warning of the need to plan hospital care in the face of the explosion of cases in Brazil. Other countries, such as the United States, already have hospitals overwhelmed by Ômicron-related Covid-19 outbreaks. In Brazil, President Jair Bolsonaro played down the effects of the variant and said that Ômicron is “welcome”.

There was an increase in the absolute number of hospitalizations both in ICU beds and in wards in states of the five regions of the country, according to a survey by the Estadão with the Health Departments.

The total number of hospitalizations now does not compare to that seen during the peak of covid in the 1st half of 2021, thanks to vaccination, but it puts pressure on public and private services. Secretaries open beds to meet demand and consider canceling elective surgeries.

In São Paulo, the city hall of the capital announced on Thursday the reservation of 1,100 exclusive beds for the treatment of covid-19. As of Monday, health centers will have extended opening hours and some units will even be open 24 hours a day. 23 tents will also be set up to welcome the population, in addition to having already been authorized to hire more doctors and nursing teams.

In Paraná, there were 175 patients in the ICU with suspected or confirmed covid-19 on December 31. Twelve days later, the number jumped to 249 – up 42%. The increase was even greater in the state’s wards, at 82%.

In Espírito Santo, the number of patients in the ward and ICU doubled, compared to December. There were openings of new beds in the last 30 days and more vacancies should be opened. “We have already designed a scenario, which we hope does not happen, of canceling elective surgeries”, says Nésio Fernandes, Secretary of Health. According to him, in relation to previous waves of the disease, there is now a greater difference between detected cases and hospitalizations, but the volume of infections worries.

Other states that have been discharged from hospitalizations for covid or respiratory syndrome are: Amazonas, Tocantins, Pernambuco, Maranhão, Alagoas, Paraíba, Bahia, São Paulo, Minas Gerais and Mato Grosso.

In Rio, requests for beds to the state regulation center, which averaged 14 per day in December, rose to an average of 51 in January. In São Paulo, the State Health Department sees a 30% increase in new admissions in the last epidemiological week. The folder said it had slowed down the redirection of covid beds. And, if necessary, will expand assistance.

Health Minister Marcelo Queiroga said on Thursday that unvaccinated people account for the majority of hospitalizations. In a letter to Queiroga, the National Council of Health Secretaries (Conass) stated that the increase in cases “again imposes challenges on health systems”. Conass recalls that a third of the population is not vaccinated with two doses, which leaves Brazil “vulnerable to a large wave of cases, which could also cause hospital pressure”.

“If the hospital system collapses, both in the private network and in the public network, preventable deaths may occur due to the non-guarantee of access to hospitalization”, says the council. The secretaries ask the ministry for immediate authorization to operate, “under the conditions adopted throughout the year 2021”, of the entire hospital network against covid-19.

In Mato Grosso do Sul, the Secretary of Health, Geraldo Resende, says that beds have been disabled by the ministry and there is an “excessively large number of cases” of covid among people who have returned from a trip. “It’s scary. Units will suffer the impact of hospitalization, even if the cases are not so serious.” To meet the demand, the state must reopen by the end of January 40 ICU beds and 45 clinical beds.

Through a note, the Ministry of Health reported that the conversion of about 6,500 ICU beds for covid-19 into conventional ICU beds was carried out after a debate with states and municipalities, “for the best use of existing beds. “. “The authorization of Covid-19 ICU beds is temporary and it is up to states and municipalities to request the extension of the cost, as well as the authorization of more beds, according to the demand and needs of each region”, completed the folder.

Hospitalization discharge began in December after months of decline

The increase in hospitalizations for covid-19 now occurs after a season of reduction in hospitalizations – and coincides with the advance of Ômicron across the country. In São Paulo, the number of patients hospitalized in ICUs was falling since June. The trend reversed from the last week of 2021.

In Espírito Santo, the number of occupied ICU beds fell as of November, but rose again at the end of December – and continues to rise. In Rio, since November, the number of patients in the queue for a bed was no more than 10. On the 12th, the number reached 95.