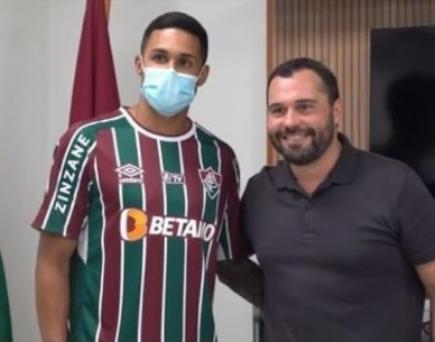 Christian’s arrival at Fluminense was preceded by a club faux pas. The left-back has not yet been signed for bureaucratic reasons as a document from the Sheriff. However, on Thursday night (13), his presentation was broadcast for a few minutes on the Flu TV channel.

The “leak” was in the air for a few minutes. In the images, Cristiano is already wearing the Fluminense shirt next to the tricolor representative Mário Bittencourt. Tricolor das Laranjeiras awaits the arrival of a document from Sheriff, a Moldovan club, to present the player as early as this Friday (14).

The side has not yet been able to start pre-season with the new teammates. Cristiano started this week to adapt training after the holidays. While his competitors Pineida, Marlon and Danilo Barcelos prepare on the field, he has been training at the gym and on the beach.

Sheriff’s highlight in the Champions League group stage, Cristiano will be bought by Fluminense, where he will have a three-year contract. In a press conference last week, the president of Fluminense, Mário Bittencourt, revealed that the operation will be for 1.4 million euros (about R$ 9 million at the current price) in installments until 2024.