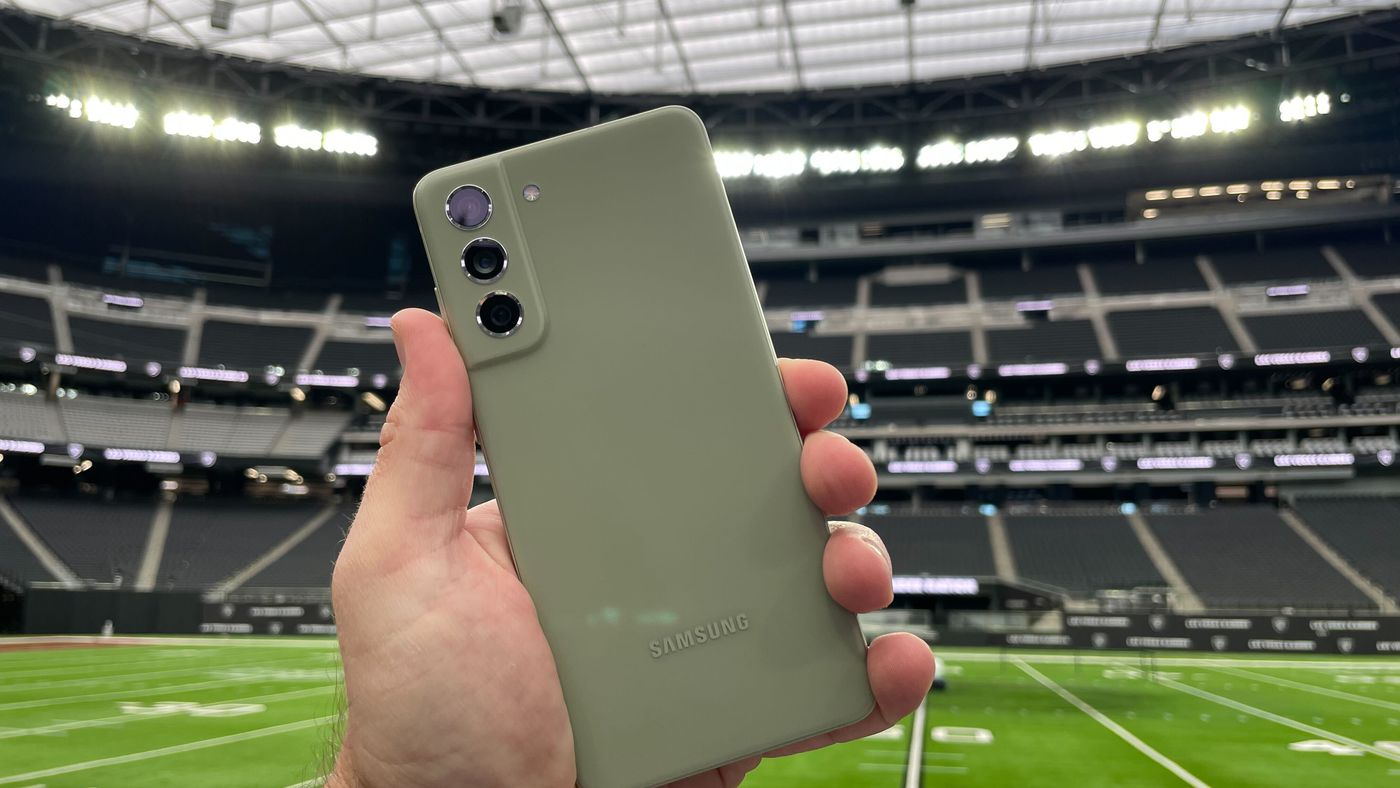 Samsung introduced the Galaxy S21 FE to the world earlier this January, and launched the device on Brazilian soil on the 11th, the same date on which its sale began in the international market. To understand a little more about its project and what Brazilian consumers can expect from cell phones, Canaltech spoke with Renato Citrini, Product Marketing Director at Samsung.

Among the topics covered are the public’s resistance to Exynos chipsets, changes made to the Galaxy S21 FE in relation to the traditional Galaxy S21, the controversial removal of accessories from the box to fit Samsung’s new “vision of sustainability”, challenges to sell the new cell phone in an increasingly competitive market, and possible changes to the Fan Edition family schedule.

One of the most talked about points with each new launch of Samsung’s top-of-the-line cell phones is the presence of an Exynos or Snapdragon platform inside, with a clear preference on the part of consumers — and Canaltech readers — for Qualcomm chipsets.

This was enhanced in 2020 with the arrival of the Galaxy S20 with Exynos in Brazil, especially due to the notable difference in the energy efficiency of the Exynos 990 compared to the Snapdragon 865, present in models sold in markets such as the United States and China.

With the Galaxy S21 generation, however, Samsung got back on track and made major improvements to its platform, leaving the Exynos 2100 at a level more similar to the Snapdragon 888.

According to Renato Citrini, the tendency is for the public’s resistance to drop more and more as Samsung itself continues to show the potential of its chipsets compared to what is delivered by the competition, and continues to deliver increasingly better features and differentials, regardless of the chip. used.

It is not Brazil that is receiving the Exynos 2100, the world is receiving the Exynos 2100. These are specific countries that receive another version due to logistics and demand, such as the United States and China. You can count it on your finger. In the end, it makes no practical difference to the consumer, who will have a high-performance experience regardless of the processor..
— Renato Citrini, Director of Product Marketing at Samsung

The Galaxy S21 FE has many points in common with the Galaxy S21, something purposely made by Samsung to deliver a very close experience in terms of functions on both devices.

According to Renato Citrini, the changes were made based on feedback from users themselves — hence the name Fan Edition — for both the Galaxy S21 and Galaxy S20 FE lines. With this, the Galaxy S21 FE seeks to please those who want a slightly bigger screen, bigger battery and better selfies.

In the case of exchanging the digital/hybrid zoom for an optical zoom itself, but with a lower sensor, Citrini comments that it was a change made to maintain the product’s price balance, offering a better sensor in the front camera that proved to be more interesting to users.

We bring a higher resolution to the selfie camera, which is now 32 MP while on the S21 and S21 Plus it was 10 MP, and then the rear that on the S21 and S21 Plus had 64 MP and had artificial intelligence to do the hybrid zoom is replaced by a more conventional camera with 3x optical and 30x hybrid zoom on the Galaxy S21 FE, but with lower resolution.
— Renato Citrini, Director of Product Marketing at Samsung

Another recurring point of criticism since it was first mentioned is the absence of a charger and headphone jack in the device’s box, something that was inaugurated by Apple and promptly followed by Samsung, regardless of the negative repercussions.

According to Renato Citrini, the action is part of the “sustainability vision for Galaxy for the Planet mobile devices”, where Samsung seeks to “act more sustainably throughout the entire life cycle of its mobile devices and business operations”, with goals to 2025 to “reduce your environmental footprint and lessen resource depletion from production to disposal of your Galaxy products”.

Among the announced goals are to incorporate recycled material into all new mobile products by 2025, eliminate all plastics from mobile device packaging by 2025, reduce standby power consumption of all smartphone chargers to less than 0.005W by 2025 and achieve zero disposal in landfills by 2025.

Samsung would have taken into account consumer behavior to continue using the charger they already have when purchasing a new cell phone, in addition to advances in wireless charging — where chargers were already sold separately. In addition, in Brazil, the brand chose to continue offering the charger to those who are interested, and it is necessary to access the Samsung Para Você website within 30 days of purchase to request the accessory at no cost.

Still, Citrini believes that this will only be necessary during the so-called “transition period”, in which some of the consumers have not yet adapted to the new reality.

What we have been doing here in Brazil is giving this option, sort of making an educational transition period. It’s coming without the charger but if you really want us to make it available, you enter the site and redeem it and it goes to your house at no cost. Apart from the ecological issue, there are millions of chargers in the world being produced, so the more we can balance, raise awareness and educate people, the better.
— Renato Citrini, Director of Product Marketing at Samsung

The Galaxy S21 FE was launched in Brazil for R$4,499, which isn’t exactly a bad MSRP considering it’s the same as its predecessor and how our country’s economy is doing. However, the device will need to face not only competing models such as the Moto G200 and Edge 20 Pro, but also from Samsung itself, as the Galaxy S21 is easily found at retail at around R$3,500.

As previously mentioned, the Galaxy S21 FE brings some differences compared to the model launched in early 2021, such as a larger screen and battery and a better selfie camera, and that is precisely what Samsung is betting on to convince consumers.

According to Renato Citrini, another important differential of the Galaxy S21 FE is precisely its late release, which allowed the device to arrive with Android 12 from the factory, which by Samsung’s policy of updates will make it receive up to Android 15, while the Galaxy S21 will “only” come to Android 14.

The S21 FE has just been released and it takes this ride of having the latest operating system, but it also has a lot to do with the target audience. Who is the S21 guy and who is the S21 FE guy? It goes much more than the value for certain features that this consumer wants. Does he want a bigger screen and a better selfie camera? So he goes on the S21 FE. Want something more compact? Go from S21.
— Renato Citrini, Director of Product Marketing at Samsung

Citrini also recalled the launch offers of the Galaxy S21 FE, which range from a free Galaxy Buds 2 for those who buy the device until January 30th to payment in 24 installments on Samsung Itaucard, Samsung’s exchange system where you can up to two old phones to discount the price of the new one, and bonuses when shopping on the Galaxy S21 FE using Samsung Pay.

Finally, Citrini commented that Samsung does not analyze competitors when defining the features that will be used in its products, but the feedback from the brand’s own consumers, something especially emphasized with the launch of the Fan Edition line from which the Galaxy S21 FE part, which, according to him, is a differential for the line.

Still on the late launch of the Galaxy S21 FE in relation to what was seen in the Galaxy S20 FE, Renato Citrini said that the new model arrived “at the right time”, without giving more details of what this means but indicating that changes in the project may have made the device announced only when Samsung felt it was really ready.

In addition, he indicated that the same can happen with all models in the family, which takes into account consumer feedback to be designed and therefore may have different life cycles than what we are used to seeing in other flagships. With that, the upcoming Galaxy S22 FE could end up arriving sooner if Samsung completes its project faster than it did with the S21 FE.

We don’t have a rigid, fixed calendar of “it has to be on that date”. Need why? It’s not ready yet, let’s launch it on time. It will launch when it has to launch. The idea of ​​the Fan Edition line is to understand consumer feedback, which features are most used, and then create a new product. The product can be ready sooner or later, we don’t have that rigidity in the calendar. If there is a great demand for a certain feature, we can advance a product and bring it beforehand. It’s all very dynamic in the technology market.
— Renato Citrini, Director of Product Marketing at Samsung

Finally, Renato Citrini commented that Samsung intends to follow an increasingly closer launch calendar in relation to the global announcement of its products, especially in strategic models, and that the brand will seek in 2022 to bring even more relevant differentials to price ranges. lower, even below R$ 1 thousand.

The Galaxy S21 FE started to be sold in Brazil along with the whole world, this shows the weight that Brazil has for Samsung as a whole. There are more than 300 stores, technical assistance coverage throughout the country, two factories, two research and development centers… Samsung invests a lot, and considers Brazil as a super important market. For 2022, we will continue to bring a lot of innovation, and not only innovation in more expensive models such as folding ones, but with a vision of innovation for everyone, looking at the entire portfolio, bringing products in the most entry-level ranges, below one thousand reais.
— Renato Citrini, Director of Product Marketing at Samsung

Raju has an exquisite taste. For him, video games are more than entertainment and he likes to discuss forms and art.
Previous Soybeans rose sharply on the Chicago Stock Exchange
Next BBB22: everything we already know about the new edition of reality | BBB22