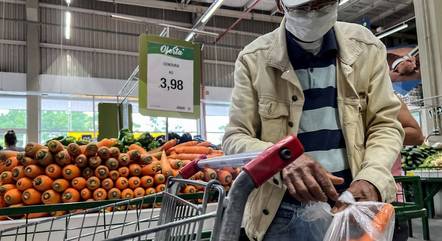 Yadunandan Singh January 14, 2022 Business Comments Off on Inflation in Brazil is the 3rd highest among the main economies in the world – News 19 Views

THE Brazilian inflation in 2021, measured by the IPCA (Broad Consumer Price Index), should be the third highest among the world’s major economies, behind only Argentina and Turkey, according to a survey by chief economist Andrea Damico, from Armor Capital, with data from the CEIC Data platform.

Some countries have not yet released the data for December and the closed one for 2021. In them, the survey considered the rate in 12 months until November last year. This is the case in Argentina, where consumer inflation reached 51.2% in the 12 months through November.

In Turkey, the index jumped 36.08% from January to December, a record in 20 years, amid President Recep Tayyip Erdogan’s intervention in the country’s Central Bank, with pressure to reduce interest rates.

The Chinese index accumulated 1.50% last year. The US economy, on the other hand, had its biggest price rise since June 1982 (7%), also exceeding the 2% target. Responsible for the survey, Andrea Damico recognizes the global nature of the rise in prices, with the increase in commodities (basic products such as food, oil and ore) and the shock of wholesale costs, partly explained by the problems in the supply chain, spreading if by retail.

Damico argues that the signs of trouble came earlier in Brazil. While wholesale prices began to rise in the world in 2021, in the country, the jump was already clear in the second half of 2020, boosted by the atypical rise in the dollar and commodities.

For Bradesco economists, consumer inflation should lose strength in the world, but it will continue above the pace of high prices before the pandemic, thus keeping the central banks of emerging countries under pressure.

By presenting a forecast of a fall from 5.06% to 2.77% in inflation in 2022 compared to 2021 in 74 countries – excluding Venezuela and Argentina from the group -, Bradesco attributes the relief to the fact that prices have already risen too much and the trend towards greater balance between demand, pressured by the increase in interest rates, and supply, which tends to improve with the reduction of production bottlenecks.

Inflation ended 2021 on the rise in almost the entire world. In the US, it reached 7%, the highest in nearly 40 years. In the Eurozone, at 5%. And this result in rich countries is not good news for Brazil and other emerging countries. That’s because the traditional remedy to fight inflation is to raise interest rates.

And, if interest rates become more attractive in countries considered safe for investors to place their money, the tendency is to flee from countries considered more problematic for investments, such as Brazil. In the local case, the scenario is even more complicated in 2022 because of the election, which should make the economic scenario more turbulent.

Born in 1992, Yadunandan approaches the world of video games thanks to two sacred monsters like Diablo and above all Sonic, strictly in the Sega Saturn version. Ranging between consoles and PCs, he is particularly fond of platform titles and RPGs, not disdaining all other genres and moving in the constant search for the perfect balance between narration and interactivity.
Previous Russian military to start leaving Kazakhstan this Thursday – News
Next Catherine imposes condition to marry