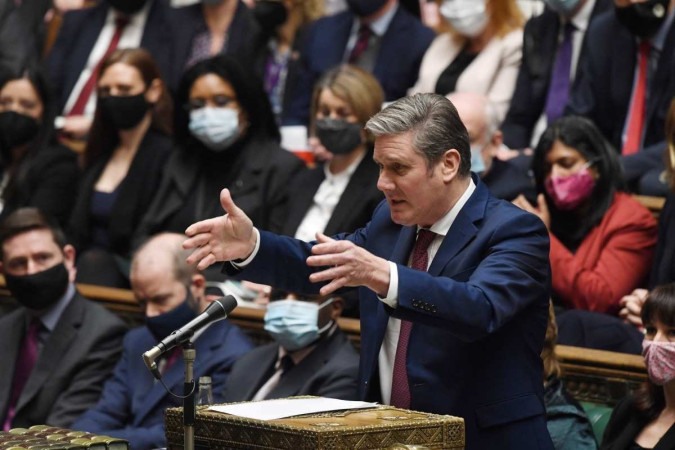 Under strong pressure from the Conservative Party itself, the Labor opposition and part of public opinion to resign, British Prime Minister Boris Johnson admitted that he attended a party in Downing Street Gardens (headquarters of the government) during the lockdown, on May 20, 2020, and “sincerely apologies” to the United Kingdom. “The gardens are an extension of the office, which has been in constant use, due to the role of fresh air in containing the virus. minutes later, to continue working, I implicitly believed it was a work event. (…) I should have sent everyone back inside”, he said, assuring that he would “take responsibility” for the “mistakes”.

“I want to apologize. I know that millions of people in this country have made extraordinary sacrifices in the last 18 months. I know the anguish they went through, unable to mourn the death of their families, to live their lives as they wanted or to do the things they loved. I understand the anger they feel at me and the government I lead when they think that Downing Street’s rules are not properly followed,” Johnson said.

Martin Reynolds, the prime minister’s private secretary, even sent, by e-mail, the party invitation to about 100 people. The message encouraged government officials to “enjoy the good weather”, having a few drinks “with social distancing” in the gardens of the official residence. The text is evidence against Johnson. At that time, the British could only meet with one person, outdoors and in a public place. In addition to the prime minister and his wife, Carrie, 40 people attended the event.

Labor leader Keir Starmer called Johnson’s defense “ridiculous” and said it was “offensive to British public opinion”. “When the whole country was under lockdown, he was throwing drinking parties in Downing Street. Will he now do the right thing and resign?” he asked. Liberal Democrats and members of the Scottish National Party (SNP) joined in on Starmer.

Even seasoned politicians from Johnson’s Conservative Party support the prime minister’s departure. “He is the prime minister, it is his government that sets these rules and he must be held accountable for his actions,” said Douglas Ross, leader of the Tories (Conservatives) in Scotland. Congressman William Wragg, also from the head of government’s party, called Johnson’s position “untenable”.

Director of the Political Economy Department at King’s College London, Professor Andrew Blick told the Courier that it was unusual for an opposition leader to demand the prime minister’s resignation. “Probably, Starmer thinks that Johnson is in grave danger. The future of the government will depend a lot on how the Conservatives themselves will judge him, if they believe that Johnson has a permanent responsibility for the scandal”, he commented.

According to the scholar, the scandal surrounding the party in Downing Street is part of a succession of accusations about breaking rules, dishonesty and corruption. “The Conservative Party has to assess whether Johnson’s leadership is irreparably damaged. There have always been reservations among the Tories about his suitability for high office,” Blick explained. He recalls that the party chose Johnson as leader in a desperate political position, when Brexit split the government and the party under Theresa May.

British citizens impacted by the 2020 lockdown also condemned Boris Johnson’s stance. Saleyha Ahsan, a doctor with the British National Health Service (NHS), lost her father, Ahsan-ul-Haq Chaudry, 81, to Covid-19 during the second wave of the pandemic in December 2020. “It was terrible to see how the covid took him. The illness and death were very painful and difficult for him. I believe my father contracted the disease because the government didn’t lock the country down early enough,” the resident told the Correio by email. from London. She sees the scandal surrounding the Downing Street garden parties as inexcusable. “The rules were made by Downing Street. How did they not follow their own rules? At the time I was working in a hospital, on the front lines. We understood the rules clearly. I am furious as a doctor and a British citizen,” she added.

For Saleyha, the gatherings in Downing Street were clear transgressions of the lockdown. “How can we not be sure that the spread of infections has increased because of these gatherings? We know that there were several similar parties during the first year of the pandemic,” he said. She believes Johnson didn’t assimilate the lessons after the first party. “The prime minister said he thought it was a business meeting. But there was an email invitation asking people to bring their own bottle.”

Liverpool resident teacher Amanda McEgan, 50, buried her daughter, Isabel, 19, who had cancer, on May 22, 2020, two days after the party hosted by Boris Johnson. “I am furious. We have lived through the most terrible thing any parent can experience. The severe restrictions we have followed have made it so much worse. Our daughter has spent the last eight weeks of her life isolated from family, friends and her beloved sister Eleanor. we held her hand, during her passage, the government that created the rules we followed flaunted them to the extreme. They are liars, they have no righteousness to govern. Isabel had more integrity in her short life than they could ever dream of having”, he told the Correio , by email.

Food maven. Unapologetic travel fanatic. MCU's fan. Infuriatingly humble creator. Award-winning pop culture ninja.
Previous Copinha defines all the duels of the third phase; see who your team will face and when the game will be
Next R$ 350/@: Hold the fat ox that arroba can shoot