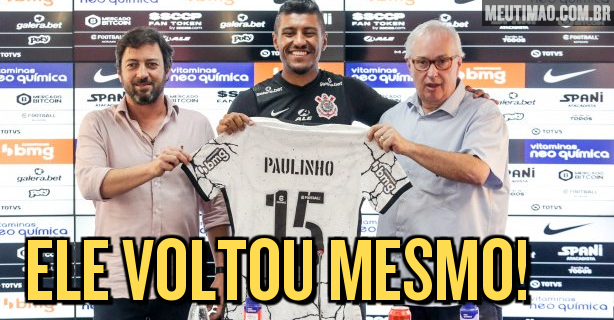 Almost a month after the return announcement, midfielder Paulinho was officially presented by Corinthians this Friday. The player wore the white shirt, number 15, alongside president Duilio Monteiro Alves and director Roberto de Andrade, at CT Joaquim Grava. After that, the midfielder gave his first press conference as an alvinegra player on his return.

“Good afternoon everyone. It is a great pleasure to be the first athlete to participate in a press conference with you here after two years without your presence. I am happy for the trust of the management and the club, and now it’s time to continue the work to in a little while the competitions will start”, began the player.

Paulinho was announced on December 15 of last year. The midfielder signed a contract valid for two years, until the end of 2023. The player’s arrival was part of an action by the team’s new sponsor, Grupo Taunsa. Paulinho even arrived in a truck at Parque São Jorge on the day.

During the press conference, the steering wheel thanked the sponsor and all the club’s effort to bring him back. Paulinho even joked about the possibility of being a poster boy for the company in the agricultural sector.

“I’d like to thank Taunsa for the effort, along with the management and club. As for the poster boy, I don’t know anything yet. When I know, the board and staff can pass it on to you. I just want to thank you for the effort made so that I I could return here. I’m grateful for that and I’ll try to repay on the field with results, delivery and achieving our goals. I don’t know about advertising (laughs)”, he said.

The player has been training normally with the alvinegro cast since the first day of replay. Despite this, there is still the expectation if he will be able to play in the debut of Paulistão, on January 25th. Paulinho’s last game was on September 17 of last year, for Al-Ahli Jeddah, from Saudi Arabia.

Paulinho arrived at Corinthians for the first time in 2010, after standing out at Bragantino. At Timão, there were 167 games and 34 goals scored. In addition, he participated in the conquests of the Brazilian Championship (2011), Libertadores (2012), Club World Cup (2012) and Campeonato Paulista (2013). He left the club to play for Tottenham in England. He also played for Guangzhou, in China, for Barcelona, ​​in Spain and for Al-Ahli, in Saudi Arabia.