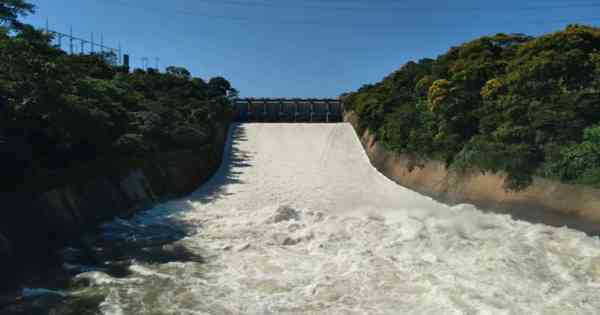 The Minas Gerais Energy Company (Cemig) decided to start the procedure for opening the gates of the Trs Marias Hydroelectric Power Plant (UHE), in the Central Region of the state, this Friday morning (1/14). The action was scheduled to take place last Wednesday, but was postponed.

The decision to open the floodgates is intended to control the volume of water that has increased a lot with the constant rains in early January. The postponement took into account the possibility of raising the level of the São Francisco River and, consequently, flooding sections of the river bed that leads to the city of Pirapora.

“Considering the trend of reduced flows in the São Francisco River in the stretch between the mouth of the Abaet River and the city of Pirapora, it will be possible to start opening the floodgates at UHE Trs Marias from Friday, without worsening the condition of already experienced in this stretch”, explained the company.

According to Cemig, the reduction in outflows into the So Francisco River is due to the weakening of the event caused by the formation of a South Atlantic Convergence Zone (ZCAS) that caused heavy rains in the state.

In view of the situation, to control the rise in the level of the reservoir, which until 9 am this morning had a volume of 86.48%, the company began to pour water through the floodgates.

Check out the video of the open gates below:

The work will be carried out in stages that were aligned with the National Water and Basic Sanitation Agency (ANA) and the National Electric System Operator (ONS). Check it out below:

According to Cemig’s statement, the floodgates will remain open after Monday (1/17) and, according to the conditions that will be observed in the So Francisco River basin in the coming days, the possibility of further increases is not ruled out.

Opening had not occurred for two years

According to Cemig, the floodgates have not been opened since the beginning of 2020 and, even with this flow, the expectation is that the reservoir will continue to gain storage until the end of January.

“Cemig continues to monitor the operating condition of the reservoir and further expansions may be necessary, according to the inflows verified in the reservoir in the coming days”, says the company.