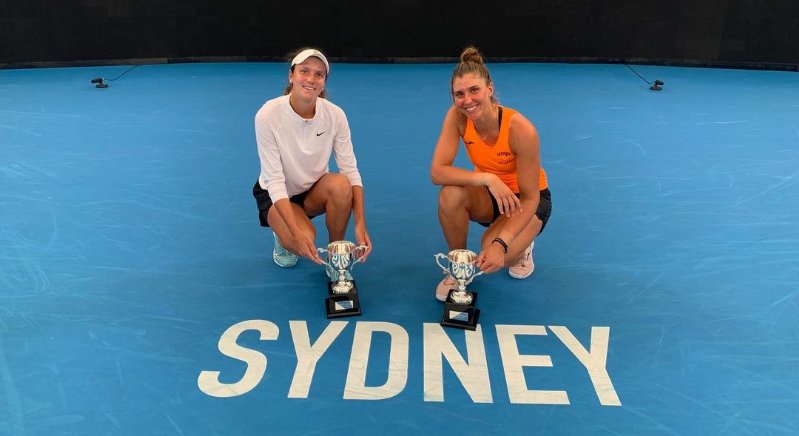 Sydney (Australia) – Beatriz Haddad Maia’s excellent week in the WTA 500 Sydney doubles bracket ended in the best possible way. Bia and Kazakh partner Anna Danilina won the title of the preparatory tournament for the Australian Open, beating the Hungarian Panna Udvardy and the German Vivian Heisen by 4/6, 7/5 and 10-8 in the final.

This is Bia Haddad Maia’s third career doubles title on the WTA circuit’s elite. Prior to that, she had won two 250 tournaments in Bogotá, with Paula Gonçalves in 2015 and with Argentina’s Nadia Podoroska in 2017.

The 25-year-old from São Paulo is now only 485th in the doubles ranking, but was once 79th in the world when she played in the sport more often. The title is worth 470 points in the doubles rankings and should put her back in the top 200. The champions also share a prize pool of 36,200 Australian dollars. Bia prioritizes the singles circuit and is number 1 in Brazil and 88 in the world. She debuts in the Australian Open singles bracket against American Katie Volynets.

It took seven match-points to close the game
Bia and her partner got off to a good start and were the first to break, leading the opening set by 3/1. But after that, they would only play one more game until the end of the partial. Udvardy and Heisen managed to break the Brazilian’s serve twice to win the first set.

The second half started with a great return from Danilina with the backhand in parallel to break the Hungarian’s service. In advantage, Bia and his Kazakh partner even led the set by 4/2, but allowed the tie in the eighth game. In the sequence, Udvardy confirmed the service without scares and his pair went ahead. But after that, it was Danilina’s turn to serve well and Heisen’s service was broken with a double fault. A great game by Bia forced the match tiebreak.

Big serves to even it up 🙌

The tiebreaker game started with a wide advantage for Bia and Danilina, who won the first four points and were expanding the difference, opening 9-2 on the scoreboard. However, closing the match was a tough task for the Brazilian and the Kazakh, who needed seven match-points to confirm the victory.

Bia eliminated favorite duos and equaled Stefani’s mark
During the campaign until the final, Bia and Danilina eliminated two favorite duos. In their debut, they won the Canadian Gabriela Dabrowski and the Mexican Giuliana Olmos, seeded 3 in the event. In the semifinals, they passed the Japanese Shuko Aoyama and Ena Shibahara, seed 2. They also defeated the Russians Ekaterina Alexandrova and Natela Dzalamidze, with quarter-final victory.

Now with three WTA titles, Bia also equals the three WTA titles of Olympic medalist Luísa Stefani, currently number 10 in the world among doubles specialists. The two Brazilians also try to get closer to the brands of Patricia Medrado, owner of five top-tier titles, and Claudia Monteiro, which has four achievements. The legendary Maria Esther Bueno, despite having most of the achievements in the amateur phase, is also the owner of the biggest title of Brazilian women in professional tennis by winning the US Open in 1968.

Bia thanked her partner and dedicated the title to flood victims
During the award ceremony, Bia thanked her partner, Danilina. He remembers that the duo was formed at the last minute and that Kazakh would not even go to Australia. He also dedicated the conquest to the victims of the floods we had in Brazil, especially in the states of Bahia and Minas Gerais, in recent weeks.

“First of all, I want to thank Anna for playing this week with me. We weren’t going to play together, she was going to play another tournament in Europe, but I was without a partner and I sent her a message, she accepted and came on the first plane to We didn’t have high expectations for this week, but I think that’s why we have this trophy now”, said Bia to her partner. “And I would like to dedicate this trophy to all the people in Brazil who are going through difficult times, because we have been suffering from heavy rains in the last few weeks. People are dying. So I can only send them good vibes. I know that a tennis match is not as important as the loss of a life. Thank you very much.”