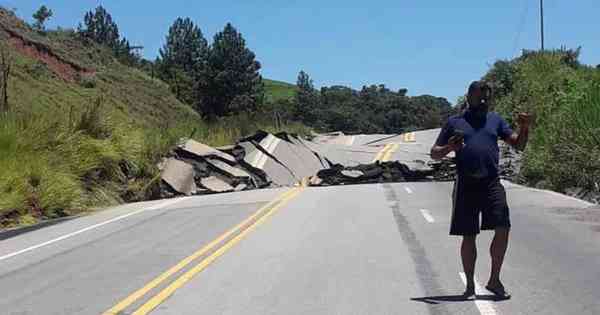 With the closure of the stretch of BR-381, at the time of KM 321 of BR-381, due to the destruction of at least 100 meters of the two lanes, at the time of Nova Era, drivers traveling in both directions, between the do Ao and Belo Horizonte, seek alternative routes to reach their destinations.

The National Department of Infrastructure and Transport (Dnit) advises that drivers of light and heavy vehicles that are leaving Ipatinga, use the alternative route through the municipalities of Belo Oriente, Guanhes and Itabira.

On this route, traffic flows normally and without any delays. The Municipality of Guanhes reported that in the area of ​​the municipality, cars, buses and trucks do not find it difficult to reach Itabira.

For drivers traveling from Belo Horizonte to Vale do Ao, the alternative route indicated by the Federal Highway Police passes through So Domingos do Prata, until reaching LMG-760, which connects Timteo to Dionsio and So Jos do Goiabal.

The stretch to the Baixa Verde district is paved. Then, to Dionsio or São José do Goiabal, the route is made on a dirt road, whose stretch is approximately 35 kilometers.

Drivers traveling from Belo Horizonte to Vale do Ao also have the alternative of following the BR-262, towards Realeza, until reaching BR-116, where they should enter towards Caratinga and Inhapim. Soon after Inhapim, take the BR-458, which gives access to Ipatinga. The entire stretch is well signposted and allows the traffic of light and heavy vehicles.

On this route, to get to Governador Valadares, just follow the BR-116, ignoring the access interchange of the BR-458 and moving on, passing by Dom Cavati, Engenheiro Caldas, Alpercata, Posto da Polcia Rodoviria Federal and finally, the stretch city ​​of Valadares.