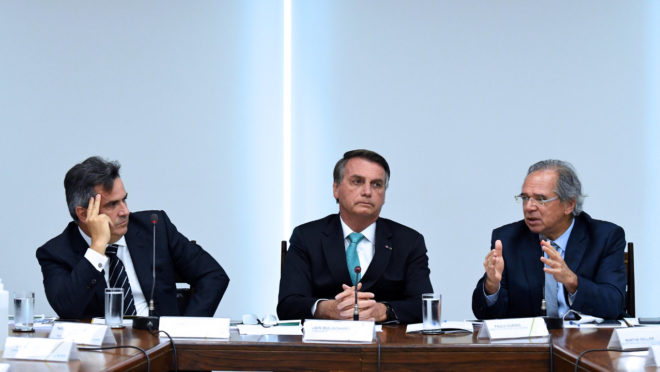 Centrão gains power to manage the Budget: understand how

Abhishek Pratap 2 weeks ago News Comments Off on Centrão gains power to manage the Budget: understand how 34 Views

President Jair Bolsonaro (PL) put an end to the arm wrestling behind the scenes between the economic team and the government’s political articulation. In a victory for Centrão, on Thursday (13) it issued a decree that divides the responsibilities for management and execution of the 2022 Budget between the Ministry of Economy and the Civil House.

Bolsonaro’s decision is unprecedented not only in his term, but since redemocratization. In summary, the measure was taken with the aim of organizing the government in a way that it is possible for the budget execution to contemplate the agreements with the allied base, admit interlocutors from the Palácio do Planalto.

Since the beginning of the government, there has been a battle between the Minister of Economy, Paulo Guedes, and the government’s political articulation, currently headed by the Chief Minister of the Civil House, Ciro Nogueira. The head of the economic team’s continued quest to contain public spending led him to constant clashes with the Planalto, as a result of agreements signed with Congress – many of which involved the release of resources from the Budget through parliamentary amendments.

In addition to opposing the fulfillment of certain agreements, Guedes was also against the payment of Auxílio Brasil of R$ 400. The average amount had been agreed between the political articulation of the Planalto and the allied base, but the Minister of Economy defended the benefit of R$ 300 – which, according to him, would be possible to pay without breaking the spending ceiling.

The most recent reason would have been the failure to comply with an agreement signed with the base, which had led allies to start a process of political frying of the chief minister of the Secretariat of Government, Flávia Arruda.

At the end of 2021, the government negotiated with the base the release of R$ 600 million in resources from parliamentary amendments. But, at the last meeting of the Budget Execution Board (JEO), a body that directly advises the president, composed of the Civil House and Economy, Guedes said that he would not execute the funds. The head of the economic team blocked the payments on the grounds that he would use them to pay debts with international organizations.

The lock on resources prevented the political articulation from fulfilling the execution of funds pledged by congressmen from the base in parliamentary amendments. As resources were negotiated by the Government Secretariat, grassroots leaders raised criticism against the minister of the portfolio, Flávia Arruda, and asked for her resignation. Bolsonaro guaranteed, however, that he will keep her in office until the ministerial reform.

What does the decree that divides management over the Budget say?

With the exception of the division of budget execution powers between the Ministry of Economy and the Civil House, the decree is customary in public administration. At the beginning of each year, the President of the Republic delegates by decree the competences of the economic team in the management and execution of the budget.

Published on Thursday (13) in Official Diary of the Union, Decree No. 10,937/22 gives the Ministry of Economy the responsibility for actions such as budgetary reallocation, opening or reopening extraordinary credits, opening special credits and changing expenses.

The originality proposed by Bolsonaro appears in the article’s sole paragraph. “The practice of the acts referred to in the caput is conditioned to the prior favorable expression of the Minister of State, head of the Civil House of the Presidency of the Republic”, informs the device.

That is, although at no time does the decree take away the competence of the economic team to carry out the Budget, in practice, it gives powers to the Civil House to have the final word. In an election year, it is an asset that Bolsonaro grants to Centrão, in the figure of Ciro Nogueira, national president of the PP, who will be able to choose how and where to spend public resources.

Interlocutors from Planalto assure, however, that everything was discussed and communicated to Guedes. The decree, by the way, bears his and Bolsonaro’s signature. “Guedes must be happy? No, but everything was already sewn up. This was all very well done”, says a palace source heard by People’s Gazette.

What does the Planalto think about the division of competences

Although the decree undeniably strengthens political articulation, interlocutors from the Planalto minimize the practical effects. “It’s not as if the president did it to take power away from Guedes and strengthen Ciro. It’s a decision to organize the government so that we can fulfill what we agreed on, and that strengthens the government as a whole”, maintains a palatial interlocutor .

Members of the political articulation, however, recognize that the measure increases Ciro Nogueira’s powers over the Budget. “It really increases, because he keeps the pen in his hand [para executar o Orçamento]”, says a second interlocutor from the Planalto. The reading made by the political nucleus is that the decree will serve as a “clearing brake” for the government.

The expectation in the Planalto is that the measure will bring practical and even immediate benefits to political articulation as it will allow the Civil House the autonomy to comply with agreements.

“The decree does not hand over the key to the Union’s safe to Ciro, it only allows an organization for the administration of the government as a whole”, highlights another government interlocutor. “Just as Guedes took the R$ 600 million and Flávia could not fulfill the agreements, the commitments were not released at the end, at the Ministry of Health, at the Ministry of Regional Development. She and Ciro have no resources ; they don’t do anything”, he adds.

The decree will, therefore, allow the government to organize itself not only to fulfill the payment of the R$ 600 million agreement, as well as other commitments that may be signed within the 2022 Budget. of resources from the Union to the states and municipalities and, consequently, of parliamentary amendments, ends three months before the election. This means that, this year, the government will have until July 2nd to implement committed parliamentary amendments, as the first round of elections takes place on October 2nd.

What does the economic team think about the decree

Despite the unprecedented decision to expand the powers of the Civil House in budget execution, the economic team assures that the minister is calm about the decree. “It’s a relief for Guedes, because he has to work within the limits of the controls. He has no way of knowing what he’s going to cut and what’s going to happen. [de recursos à base]. He has to be the guardian of fiscal balance”, assures an interlocutor of Guedes.

Just as, in practice, the decree empowers the Civil House to have the say in budget execution, it will also impose the same responsibilities with public accounts on the political nucleus. In other words, if the Planalto does not endorse the management conducted by the economic team and increases spending too much, Ciro Nogueira will assume the burden.

“For someone to win, someone will lose. Who will arbitrate this, now, is the Civil House. Guedes always tried to stay within the limits [fiscais], because there are people who want to blow the roof. The burst of the ceiling is the burst of the herd, which starts with this salary readjustment business”, says a second interlocutor of the minister.

The assessment of the economic team is that Guedes will work less pressured in 2022. “How these resources were distributed is what had been the reason for the friction, even because the parliamentarians go straight there [no Planalto negociar recursos]. They [articuladores políticos] took and approved. Now, it will be up to the Civil House, as the political coordinator of the president, to make the distribution”, maintains an interlocutor. “It relieves Guedes’s responsibility.”

The interlocutors of the economic team deny, however, that Guedes has barred resources arising from agreements signed by the political nucleus. “Now it’s going to end that business that the minister [Flávia Aruuda] said it didn’t [os recursos] because Guedes stopped. It didn’t crash anything,” says a government technician.