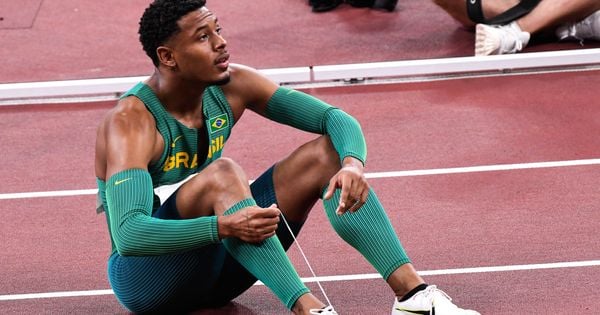 Confirmed at BBB 22, Paulo André may have the Bolsa Atleta ES suspended

Abhishek Pratap 2 weeks ago Sports Comments Off on Confirmed at BBB 22, Paulo André may have the Bolsa Atleta ES suspended 19 Views

Sprinter Paulo André Camilo had his participation confirmed in the new edition of Big Brother Brazil, but while he celebrates his confirmation in the biggest reality show in the country, where he competes for the prize of 1.5 million destined for the champion, he may also lose one of his income. monthly, albeit temporarily – the athlete was born in São Paulo and moved to Espírito Santo in his childhood.

contemplated by Capixaba Athlete Scholarship, the runner receives monthly the value of R$ 2 thousand reais – for being of international level, the youth of 23 years is entitled to the second biggest benefit of the amount made available by the Secretary of Sports and Leisure of the Government of ES. In addition to the monthly benefit, Paulo André is an athlete at Esporte Clube Pinheiros, in São Paulo, and is sponsored by Nike sports equipment.

Questioned by the report of A Gazeta, Sesport informed, in a note, that the” 2021 public notice of the Bolsa Atleta is the first that contemplates the athlete Paulo André Camilo with the financial benefit. With the entry of the athlete in the program, Sesport will evaluate, with the State Attorney General’s Office (PGE), what measures will be taken in the situation. It is worth remembering that the public notice provides for three types of penalty: warning, suspension and cancellation benefit,” the statement reads.

PROVIDED IN THE NOTICE

If he reaches the final of the program, Paulo André would stay until May without training or competing, mandatory prerequisites for the athlete to be contemplated with the state benefit. In article 14 of the notice, which talks about warning, suspension or cancellation, the following caveat appears in item 5, letter D:

– Failing to train or missing official competitions in which you must participate without just cause.

The next item, §6, mentions that the occurrence of the hypotheses provided for in this item § 5 will be penalized with the suspension of benefit payment for 1 (one) month and, in case of recurrence, the penalty of cancellation will be applied. (See the notice)

The application of warning, suspension and cancellation penalties, however, will be preceded by a prior defense, which must be presented within a period of 05 (five) business days from the date of notification.

The current public notice for the Bolsa Atleta program is benefiting 151 high-performance athletes and para-athletes, 30 more than the previous one, reaching a record in the number of grants awarded. The monthly financial aid varies according to the athlete’s category in the announcement, being R$ 500 (student), R$ 1,500 (national), R$ 2 thousand (international) and R$ 4 thousand (Olympic). Sesport’s total investment in the program is R$ 2.3 million.

The amount received by the athlete can be used to cover expenses with food, medical, dental, psychological, nutritional and physical therapy, medicines, food supplements, urban transport or to participate in training and competitions, in addition to the purchase of sports equipment.

IN THE PLANS BUT…

A top athlete and one of the biggest names in sprint athletics today in Brazil, Paulo André would be the right name of the Brazilian Athletics Confederation (CBAt) in the list of those related to the South American Indoor Championship, which qualifies for the Indoor World Championship in July. The selected ones would be announced next week, when the program will have already started – the premiere will be this Monday (17). What the entity did not count on was the runner’s going to global confinement.

In recent years, the runner has become famous in the sport and was close to lowering the 10s mark in the 100m freestyle events. At the Tokyo Games, Paulo André competed in the 100m heats, where he advanced to the semifinals, and also in the 4x100m relay for the Brazilian team.

In addition to the sprint events, Paulo André, who lives in Vila Velha and recently had a son, also appears in news, which are not related to sports performance. Recently, he was present at “Farofa da Gkay”, a party of consecutive days promoted by digital influencer Gessica Kayane Rocha de Vasconcelos.

Active on Instagram, his profile on the social network, called “iampauloandre” (I am Paulo André, in literal translation), had just under 80 thousand followers before confirmation on the BBB.

If you noticed any incorrect information in our content, click the button and let us know, so we can correct it as soon as possible.