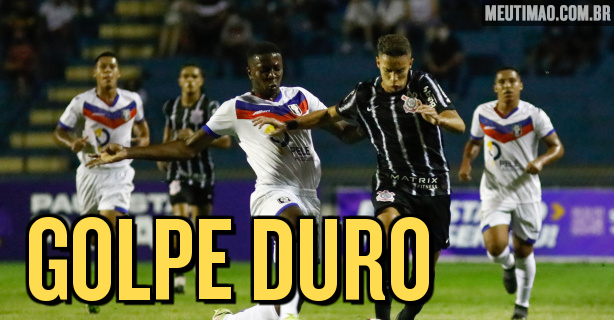 On Friday night, Corinthians returned to the field in search of a classification for the round of 16 of Copinha. At Martins Pereira Stadium, Timãozinho, however, was eliminated by Resende, from Rio de Janeiro, after being defeated by 2 to 1.

The match started with Diogo Siston’s team putting pressure on the opposing team. With good attacks at the beginning of the game, it didn’t take long for Timãozinho to open the scoring with a great goal from Matheus Araújo. After that, the duel became more disputed and only in the second stage did the net swing again, when Brendon equalized at the beginning of the penalty. In stoppage time, Halls scored the scoring goal for the Rio de Janeiro team.

Diogo Siston once again did not have Mandaca available for the game, as the player felt his ankle. In this way, the team went to the field with: Alan Gobetti, Léo Mana, Alemão, Robert Renan and Reginaldo; Vitor, Matheus Araújo, Biro and Keven; Giovanni and Felipe Augusto.

Corinthians started the game by pressing the opposing team, as usual in this Copinha. In the first few minutes, Guilherme Biro appeared for the first time and took a risk from outside the area, but Sales made a good save.

Still in the attacking field, Timãozinho returned to scare with Matheus Araújo. After a confusion in midfield, shirt 10 received a pass from Giovane, cut one and hit, but the ball was deflected by the defense. In the corner, Alemão received a cross and headed it well, without danger.

The goal finally came in the 19th minute. After a good play on the right side of the field, Biro found a good pass for Matheus Araújo, who dominated dribbling the Resende defender and hit without chances for the goalkeeper..

After opening the scoring, Timão had the first scare of the duel. Brendon threw Bismarck deep to come face-to-face with Alan Gobetti, who made a great save to keep Corinthians in the lead.

The game then became more disputed. With a lot of technical quality on both sides of the field, the teams saw the ball spinning a lot in the central area and without great chances of goals.

With 35 minutes, Corinthians attacked again. Léo Mana received a good pass from Vitor and kicked it from outside the area, but Sales made a good save. Soon after, Matheus Araújo crossed and Felipe Augusto hit first, but the defender blocked the kick.

The last offensive act of the first stage was by Corinthians. After Resende’s corner, Guilherme Biro started the counterattack with a nice dribble and passed it to Giovane. Shirt 11 crossed, the ball was cleared by the defense and left for Biro, who hit the first time and forced Sales to make a good save. In the next corner, Alemão headed in with great danger.

Despite the partial victory in the first half, Diogo Siston returned from the break with the first change in his team: Rodrigo Varanda replaced Felipe Augusto. Shirt 17 came in and, right away, created good plays in Corinthians’ attack.

With six minutes of play, Resende scared for the first time. Léo Pedro received in depth in the back of Reginaldo and was fouled in the limit with the area. In the charge, shirt 11 isolated the ball.

The team from Rio de Janeiro kept the ball more, as they needed to score the equalizer to stay alive in Copinha. Because of this, Timãozinho started to play with more focus on quick counterattacks.

After much pressure on Corinthians, Resende won a penalty, after Kaio was played by Léo Mana. In the charge, Brendon hit with a lot of category to tie the game in São José.

Seeking a reaction in the match, Diogo Siston promoted two more substitutions in the team: Ryan Gustavo in the place of Guilherme Biro and Riquelme in place of Vitor.

With 25 minutes into the game, Corinthians returned when they arrived in the attacking field. In a rehearsed play, Reginaldo rolled, Matheus Araújo made the light barrier and Keven arrived finishing, but the ball passed without danger.

Still unable to return to the game, Diogo Siston made two more changes at Corinthians: Pedro in place of Keven and Belezi in place of Alemão. Even with the changes, Timãozinho continued to have difficulties in the match.

In the final minutes, Giovane ran on a dead ball and was injured when he hit goalkeeper Sales. With that, Diogo Siston made another change at Timão: Pedrinho in the vacancy of shirt 11.

In a play in the 43rd minute, Corinthians made the best move of its second half. Pedro and Ryan exchanged passes and the ball fell to Rodrigo Varanda, who wasted a good chance to score the second goal. Soon after, Riquelme and Pedro had good chances, but they didn’t take advantage of them.

Soon after, Reginaldo missed the ball and Resende scared him. In Medina’s shot, Alan Gobetti made a great save to prevent the goal. In the corner, Halls rose high and headed with no chance to score Resende’s classification goal.