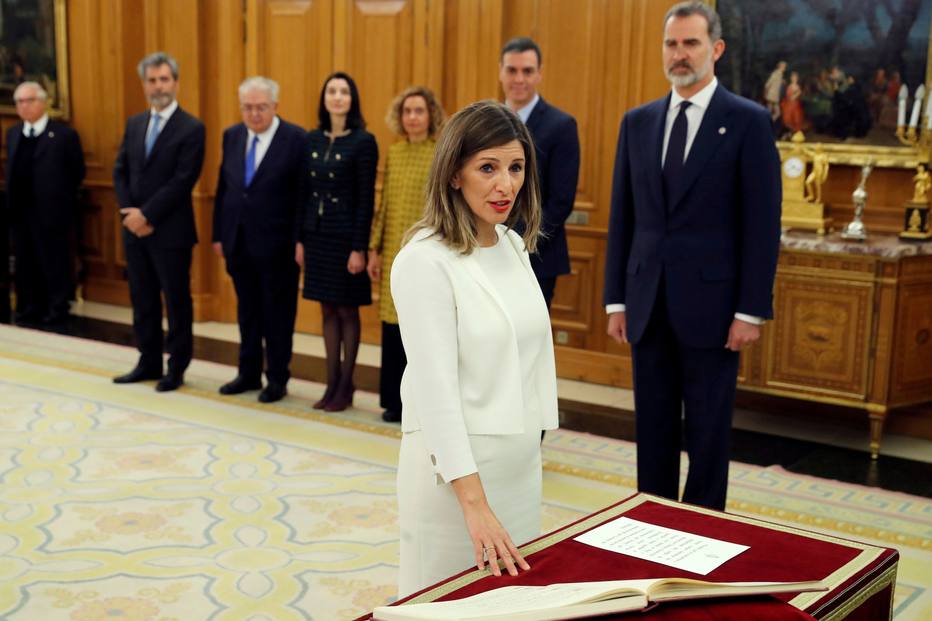 Spanish minister says she will discuss labor reform with Lula

BRASÍLIA – Minister of Labor and Social Economy of Spain, the labor lawyer Yolanda Díaz Pérez, 50, coordinated the labor “counter-reform” negotiations recently launched by the local government. To the Estadão, Pérez said he will come to Brazil to discuss the issue with former president Luiz Inácio Lula da Silva (PT), a virtual candidate for the Planalto Palace in October.

The Spanish “counter-reform” became a topic in Brazil after Lula, now the leader in polls, suggested that he could use it as a basis for reviewing the 2017 labor reform under Michel Temer (MDB). Earlier this week, Lula participated in a virtual meeting with politicians from the Spanish Socialist Obrero Party (PSOE) of Spanish President Pedro Sánchez. During the meeting, however, the PT member avoided saying explicitly that he would revoke the 2017 reform, according to the Estadão.

The text led by Díaz was presented at the end of last December, after nine months of negotiations involving the government, employers’ and workers’ unions – the three parties formally accepted the result, although there is discontent on the part of the business community. The text has five main articles, and occupies 54 pages of the Spanish equivalent of the Brazilian Official Gazette. This is a new law, and not the simple repeal of the previous reform, of a liberalizing nature, made in 2012 by the government of the former president. Mariano Rajoy, from the conservative Popular Party (PP).

According to Spanish experts consulted by the Estadão, the reform has three objectives: to strengthen the position of labor unions during collective bargaining; try to improve the conditions of outsourced workers, preventing them from earning less than those directly hired; and, mainly, to reduce the high percentage of temporary workers, which today reaches 25% – the highest among the 27 countries of the European Union.

“The (central point) was the serious problem existing in the Spanish labor market, the huge rate of temporary workers. And precariousness as a way of life. The negotiation was very difficult, but from the first minute I wanted to reach an agreement with the social agents”, says minister Yolanda Díaz. “In general, major labor reforms in Spain are accompanied by social conflicts. This one was made on the basis of an agreement by all parties,” she told the Estadão.

In early 2012, Rajoy let slip that the labor reform his government would propose in a few months’ time would cost him “a general strike.” The sincericide took place before a European Council meeting in Brussels – the former president did not notice a microphone on. The labor reform continued a work flexibilization that had been initiated two years earlier, in 2010, by a PSOE government, and was just one of several austerity measures demanded by the European Union.

The 2012 labor reform gave companies more flexibility when hiring, and helped to reduce Spain’s very high unemployment – ​​at the end of that year, the percentage of unemployed people in the country was 25.7%, reaching 42, 5% among young people aged 20 to 29. Today, the unemployment rate is 14.5%, according to data from the National Institute of Statistics (INE), the local equivalent of the Brazilian Institute of Statistical Geography (IBGE). On the other hand, the change, which was cited by Michel Temer as one of the inspirations for the 2017 Brazilian reform, lowered wages and increased the number of temporary workers.

The December “counter-reform” is part of a set of measures, such as the so-called “Rider Law” (which regulates the activity of app delivery people) and the increase in the national minimum wage, which today stands at 950 Euros (R$ 6,012, 90, at the current exchange rate).

Presented by means of a decree-law (equivalent to the Brazilian provisional measure), the “counter-reform” must be approved by the Spanish Parliament within 30 days from the formalization of the proposal. And there are difficulties: part of the left considers that the text brings too many concessions to the employers’ unions, which in turn are also critical of the final result. In addition, Basque and Catalan regional nationalist parties, which support the Sánchez government, demand specific rules for their regions in exchange for the text’s approval.

“It will not pass easily. This is not a structuring reform; a lot of people here (in Spain) says that it is a mini-reform, a ‘soft’ reform, because it only deals with some points of Rajoy’s reform. Even so, there is no consensus (…). There is no unanimity between the center and center-right sectors in Parliament, nor among the business sectors”, says Esther Solano, who holds a PhD in Social Sciences from the Complutense University of Madrid and a professor of International Relations at the Federal University of São Paulo. (Unifesp).

In aggregate, the measures try to meet the demands of a generation of young Spaniards who suffer from the (relative) lack of dynamism of the local economy, which results in few jobs, low wages and too many bad contracts. The bad situation leads many to leave the country in search of work in the more prosperous neighbors on the other side of the Pyrenees, mainly in Germany.

In Spain, many millennials (people born from the early 1980s to the early 2000s) are also “mileuristas”: young people with higher education, knowledge of foreign languages ​​and even a postgraduate degree, but who cannot earn more than a thousand euros per month (R$ 6.3 thousand, in the current exchange rate) – almost the minimum wage of 950 Euros. Many are voters of the PSOE and the leftist Podemos, which is part of the governing coalition – this emerged, in part, as a response to the austerity program implemented by Mariano Rajoy’s (conservative) Popular Party.

Contract for work and service

One of the main points of the reform was the extinction of a contracting model known as “contract for work and specific service” – a type of “temporary” contract that could last for years and that prevented the hiring of employees who, in practice, were fixed.

The lawyer and professor of labor law Laura Mora Cabello de Alba, from the University of Castilla-La Mancha, explains that temporary contracts will continue to exist, but only in two situations: for replacements (when the holder gets sick or goes on vacation) and in cases where there is a structural need for the sector. “It is structural when the sector needs a temporary service, during a certain period of time during the year. In this case, temporary employment is justified. In a ski resort, for example, or at the grape harvest”, she explains.

“The modality of contract for work and service allowed this temporary contract to be extended for a long time, for up to three years. There was also a lot of fraud, as it was used even in the fundamental activities of a company. So the person was hired ‘temporarily’ for activities that actually had a definitive character within that company”, explains Laura Mora.

Another central aspect of the “counter-reform” is the change in the rules of collective agreements. From now on, the agreements negotiated by each sector of the economy will prevail over the individual agreements of each company, giving more strength to the workers’ unions.

“The 2012 reform (by Rajoy) gave greater weight to negotiation in each company, to the detriment of joint negotiation in the economic sector. And this created opportunities for cases of ‘social dumping’ (when the company restricts labor rights to gain an advantage over competitors). This ends with the 2021 reform: there is now a minimum wage for each sector, which companies cannot reduce”, says Adrián Todolí.

“The third ‘foot’ is outsourcing. will be modified (the legislation) so that outsourced workers cannot receive lower wages than those directly hired. Or at least not so easy. It will probably still be possible (reduce the amount paid through outsourcing), but it will be more difficult than before”, he adds.

Leading negotiator of the labor “counter-reform” recently approved in Spain, labor lawyer Yolanda Díaz Pérez is the current second vice president of the Spanish government and minister of Labor and Social Economy.

How were the negotiations that resulted in the final text of the proposal?

It was a very complex negotiation process, which lasted nine months, with very intense meetings. It involved teams from unions and employers’ organizations, and from the Ministry of Labor and Social Economy. More than 20 people involved. In the last two months, the pace of meetings has increased. We work daily, including meetings for 12 or 13 hours a day. The whole process was very complicated, including the Rider Law discussions (which regulates the activity of couriers and came into force in August 2021).

This reform basically does two things: one is to change the paradigm of labor relations in our country, recovering rights for workers. In Spain there were more than 50 labor reforms (over the years), which always went in the opposite direction, in which workers always lost rights. Of the major structural reforms, this is the first that was carried out on the basis of an agreement by social agents.

What were the most conflicting points in the negotiations?

Undoubtedly they were those related to temporary contracts. Note that Spain has a rate of temporary contracts of almost 26%. There are productive sectors in Spain that are seasonal. What the reform does is to bet on a model in which the norm is job stability (including mechanisms such as the discontinuous fixed contract, in which the employee remains linked to the company between one working season and another), and that presupposes changing everything.

We made disappear a type of contract that existed in Spain since Francoism (dictatorship commanded by Francisco Franco between 1939 and 1975), called a contract for specific work and service, which made labor relations very precarious, and this was extremely delicate. It took the most time.

Does the government not fear that the increase in wages and costs brought about by the reform will result in unemployment?

No, not at all. We have shown, since we came into government, that this is not so. The first agreement we made when we arrived was to raise the minimum wage to 950 Euros (R$ 6,012.90, at the current exchange rate). At the time, several omens said that this would destroy the job, that it would be a hecatomb, a disaster. None of this happened. And not only that: we showed that the increase in the minimum wage was good for the economy, because it increased the consumption power of workers.

In addition, it was the best tool to advance social equality, especially when fighting labor poverty. The rise in the minimum wage has increased the income of lower-wage workers, who are mainly women and young people. That means it helped to narrow the gender pay gap (where women earn less than men) by 2.5 percentage points.