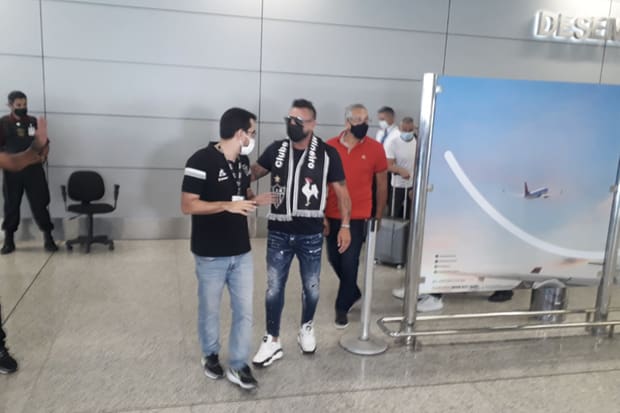 New coach of Galo, Argentine El Turco Mohamed takes charge of the team this Monday (17); he arrived this Sunday at Confins airport

Atlético’s new coach, Antônio El Turco Mohamed, arrived at the Tancredo Neves International Airport, in Confins, in the early afternoon of this Sunday (16), after more than two and a half hours of a chartered flight that left Buenos Aires, around from 10 am, Brasilia time. The Argentine coach was accompanied by three members of the technical commission, two technical assistants and a physical preparation assistant.

In a quick statement to the press in the arrivals hall, he said he was very happy, greeted Massa Atletica and promised to continue the cycle of victories. “We will continue with the sequence of titles won by Cuca in 2021. I am very happy to be here, and now we are going to work”, he said.

The Argentine, naturalized Mexican, was made commander of the alvinegro team for this season last Thursday (13).

The arrival of the new captain of Galo at the airport was accompanied by some fans who decided to make the moment an opportunity for leisure. As is the case of the couple Klauss Dornas, 37, and Grazielle Nunes, 37, who came with their children Vitor, 5 years old, and Malu, 2 years old, from Lagoa Santa, in the metropolitan region of Belo Horizonte. They brought a souvenir: a black cap written “Aqui é Galo” in gold letters.

“Being able to host El Turco is a great pleasure for us. And Atlético, if not the main leisure, is one of the. So we took advantage of this free time to receive him”, said Klauss.

In turn, Grazielle commented on the expectation regarding the new coach. “We came with the children to show that we support Galo at all times and also to welcome the new coach so that he has a good and successful year,” he said. “I hope he continues this magical year that was 2021, that he keeps the focus and the unity of the cast, so that he is victorious, once again”, he concluded.

Passing through the terminal, Atletico fan Renan Baldoni, 31, is a farmer and came from the city of Santo Antônio do Amparo to pick up his mother at the airport. Upon learning that the new technician would disembark, he did not miss the opportunity to take a picture of the scene. “The expectation about him is very high. I researched a lot about him and I liked what I saw and, for sure, we will be taking (cups and victories) this year again. I hope he adapts very well to Belo Horizonte and brings him much happiness. for the fans,” he said.

PATHS THAT HAVE ALREADY CROSSED

Atlético and Mohamed’s stories intersect in one of the club’s most epic chapters. In 2013, the Argentine was the coach of Tijuana, Galo’s opponent in the quarterfinals of that year’s Libertadores. The alvinegro eliminated the Mexicans in an epic performance by goalkeeper Victor, being later champion.

Antonio El Turco Mohamed, 51, has been without a club since late 2020, when he left Monterrey-MEX. In addition to the Mexican club, he worked at Huracán-ARG, América-MEX, Celta de Vigo-ESP and Tijuana, also from Mexico. Because he was unemployed, the deal with Galo happened more easily.

El Turco will have a lean coaching staff, with three more people on his team. The coach will replace Cuca, who resigned at the end of last year citing personal issues. In this way, the Rooster ended his saga for a coach. The club tried Portuguese Jorge Jesus and Carlos Carvalhal and Argentine Eduardo Berizzo. There was no agreement with any of them.

THE TIME reinforces the commitment to quality journalism from Minas Gerais. Our newsroom daily produces responsible information that you can trust.