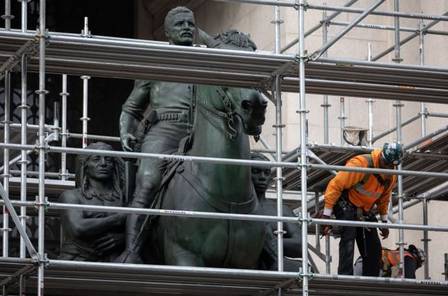 A Thursday night operation removed a statue depicting the 26th US President Theodore Roosevelt, from the main entrance of the Museum of Natural History in New York (USA). Bronze monument displays Teddy Roosevelt on horseback surrounded by an indigenous person on one side and a black person on the other. The character was played in the cinema by Robin Williams in the film “Night at the Museum” (2006). In the work, Roosevelt, a statue that comes to life at night, falls in love with another sculpture, that of an indigenous woman.

Withdrawal takes place at a time of intense national campaign against historic monuments deemed racist. Roosevelt is considered one of the first American conservationists and naturalists, but the statue is seen by many as a symbol of colonialism and racial discrimination.

A spokesperson for the museum told CNN that the process of removing the statue was “conducted by experts in historic preservation and approved by multiple New York City agencies”. It will include a restoration of the square in front of the museum.

The removal began on Tuesday after a year-and-a-half process of debate.

The museum first requested that the statue be removed in June 2020, after the murder of George Floyd by police officers in Minneapolis (USA), and the global protests that followed. The Roosevelt statue now joins several other US monuments that have been relocated in recent months. Most of these removals were motivated by the 2020 protests.

The June 2020 order was approved by the mayor of New York at the time, Bill de Blasio. A year later, the New York City Public Design Commission unanimously voted to temporarily remove and store the sculpture, until its new destination. Roosevelt’s great-grandson, Theodore Roosevelt IV, administrator of the museum, agreed with the decision..

A new home for the statue was announced last November: Medora (North Dakota), more precisely in the Theodore Roosevelt Presidential Library. The library, which is due to open in 2026, said in a statement that it had reached a long-term loan agreement with New York City.

Food maven. Unapologetic travel fanatic. MCU's fan. Infuriatingly humble creator. Award-winning pop culture ninja.
Previous PDT confirms Ciro Gomes’ pre-candidacy for the Presidency of the Republic | Elections 2022
Next Bitcoin crash: what happened and what to expect from now on, according to experts