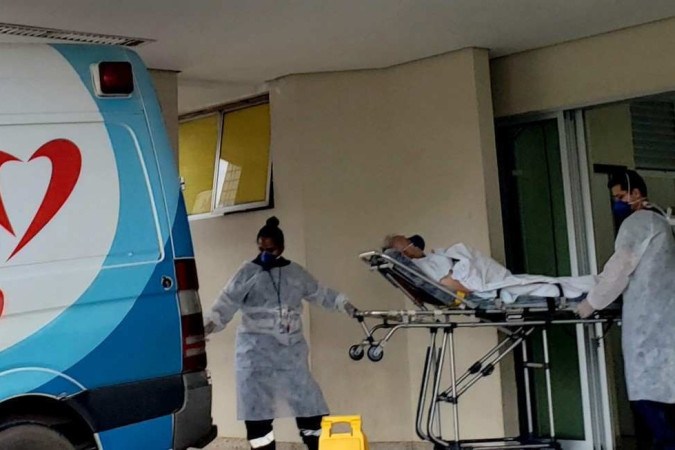 Unvaccinated represent 90% of patients hospitalized in ICUs in DF


Samambaia Regional Hospital was intended exclusively for the treatment of covid-19, except for maternity. Measure was taken as a result of the demand for hospitalization – (credit: Carlos Vieira/CB/DAPress)

In the public health network of the Federal District, there are 57 people hospitalized in intensive care units (ICUs) due to complications from covid-19. Of these patients, most are between 50 and 75 years old and, according to the Health Department, about 90% of them have not received any dose of the vaccines available against the disease – a condition still of 200,000 people in the country’s capital. In this scenario, Tuesday (25/1), the DF recorded 10,600 new cases of infections with the new coronavirus, a record. The transmission rate fell again and is at 2.04.

The occupancy of adult ICU-covid beds reached 100% by early Tuesday afternoon. Around 3 pm, the rate dropped to 93.22%, when, of the 73 beds, 57 had patients, six were vacant and 10 were blocked. Through an official note, the Health Department explains that “the nomenclature blocked bed is used when, at the moment, the bed is being prepared to receive a new patient, undergoing disinfection or maintenance in some equipment. This occurs dynamically and right after completing one of these actions, the vacancy is unlocked”.

Despite this, Governor Ibaneis Rocha (MDB) expressed concern about the current scenario of the health crisis. “We have reached the third wave of the pandemic. Nobody can take it anymore”, he said during the inauguration of the emergency care unit (UPA) in Vicente Pires. The head of the local Executive highlighted that the Government of the Federal District (GDF) works to not leave the population unattended and, for the time being, ruled out implementing restrictive measures. “We are opening new beds and we are going to take care of insuring all the health of the DF. We are entering with, around, 10 beds every day in the public network”, he declared.

Between Monday (24/1) and Tuesday, the DF recorded 10,697 cases and four deaths. In total, there are 579,130 ​​infections and 11,147 deaths confirmed since the beginning of the health crisis. With the update, the moving average of cases reached 5,490, which indicates an increase of 154.85% over the previous 14 days. The median number of victims of the disease is three, a value 50% higher when compared to the same period.

The infectologist Hemerson Luz assesses that this increase in cases should continue until March. “If we project for the DF what happened in other countries, probably, in February, we will still have many cases, but, in March, perhaps, we will have a fall”, he argues. For him, avoiding agglomerations, charging for the use of masks in open and closed places and encouraging vaccination are the main combat measures that must be adopted at the moment. The expert says that the transmission rate is falling because of the restrictive measures taken by the local government. “The reflex takes about 15 days to be felt. And the number of cases, which was really high, can account for tests carried out days ago”, completes Hemerson.

The doctor points out that the unvaccinated hinder the fight against the health crisis and that it is necessary to seek ways to encourage these people to be immunized. “The greater transmissibility of the omicron requires greater vaccine coverage. The vaccine is a way to reduce the occupation of hospitals, because it reduces serious cases”, details Hmerson Luz.

Currently, the vaccination campaign serves children aged 5 to 11 years, with and without comorbidities. The DF was the federation unit that vaccinated the highest percentage of children and youth. According to the secretary, 12.09% of this group received the first dose. In the federal capital, 268,208 boys and girls between the ages of 5 and 11 live, and the first dose was given to 32,427. This Tuesday, the Ministry of Health sent over 23,500 children’s doses of Pfizer/BioNTech, which are in the DF Cold Network and will be distributed this Wednesday (26/1) in the morning, before the opening of the points of care, to continue the vaccination of children, especially those aged 5 years, since those aged 6 years or older can receive the CoronaVac immunizer.

*Intern under the supervision of Guilherme Marinho

Due to the high transmission rate and the increase in cases caused by the ômicron variant, to adapt the capacity of the health network to the current moment of the pandemic, the Health Department maintained the transplants, ophthalmological, cardiac, orthopedic, oncological surgeries judicialized, in addition to of urgencies and emergencies. Other procedures
are analyzed if the
case and rescheduled.

“Although the Omicron is not such an aggressive strain, it, of course, affects people. To a lesser extent, but people may need hospitalization and may die. It’s not a joke, it’s not banal. This is the first point that this high occupancy of beds shows us.

However, there is the other side. With the decrease in cases in the last months of last year, several ICU beds were closed or demobilized. The absolute number of beds is much smaller than what we had in the first wave, for example. So, high occupancy is a concern, because if a person gets sick today and needs a place, he doesn’t have it. But a plan to mobilize and quickly activate beds can relieve and meet the increase in this demand.

The trend, at the moment, is for an increase in cases. The decrease in the rate only consolidates after about five consecutive days of decline. There is an expectation that these cases will decrease, but it is not overnight. In other words, we are going to spend more time with infections discharged, and we need to have a plan to care for people who, possibly, will need hospitalization in the public network.”

where to take the test

*In some UBSs, the distribution of passwords was adopted as a measure to organize the queues, in addition to controlling the service capacity of each unit.