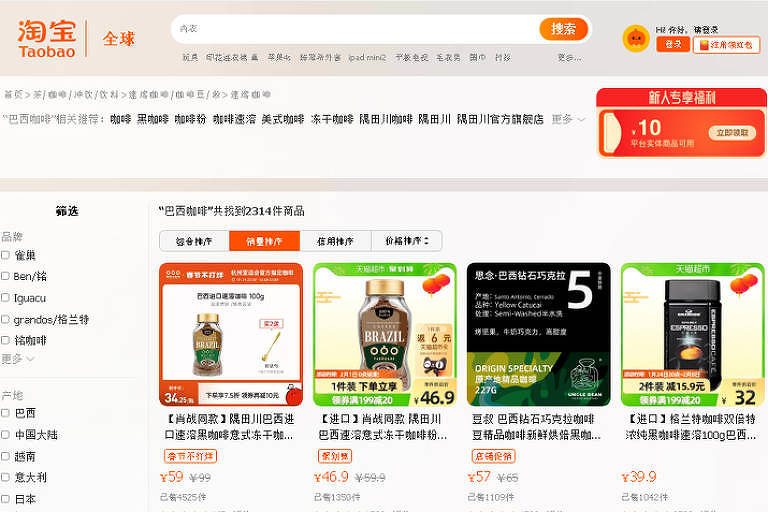 Chinese buys turtle, açaí and coffee with the Brazil brand, but sold by other countries – 01/26/2022 – Mercado

Yadunandan Singh January 27, 2022 Business Comments Off on Chinese buys turtle, açaí and coffee with the Brazil brand, but sold by other countries – 01/26/2022 – Mercado 17 Views

Gemstones, turtles and coffee are among the more than 10,000 products bearing the Brazil brand sold on the largest e-commerce platforms in China. Most of these items, however, are produced and marketed by companies in China or other countries. Really Brazilian, just the name and some ingredients.

This is what a work published by the Brazil-China Business Council, authored by Renata Thiébaut, director of the consultancy Green Proposition who has been working with online commerce in the Asian country for 16 years, shows.

The most popular brand of açaí is Belgian, “Brazilian pine nuts” are sold by American and Chinese companies, “Brazilian keratin” is one of the most popular treatments in the country, but no brand in Brazil offers the product, according to the expert.

The document is a kind of guide on opportunities for Brazilian companies in the e-commerce of the Asian country, which moves US$ 2.3 trillion a year – the largest in the world, with a value greater than the sum of the Brazilian and Argentine economies.

The work maps the main platforms and business models available. It also points to the food and beverage sectors, mainly organic and plant-based, beauty and fashion as the most promising for Brazilian exporters.

China is the main destination for Brazilian exports, which are concentrated in basic products (commodities), such as meat, oil and soy.

According to Thiébaut, a change is needed in the strategy of Brazilian companies for this market, with a more focused action on strengthening brands and selling products with higher added value. In this context, e-commerce emerges as a gateway to the country.

An example of a segment that is already strong in this market is the footwear industry. Havaianas is the most prominent Brazilian brand in China. Melissa, Ipanema, Schutz, Zaxy, Grendene, Bibi and Kidy are also present.

Other “Brazilian” finished products also have high visibility on platforms such as Taobao and TMall (both of the Alibaba group), JD.com and Pinduduo. But, in general, they are items manufactured outside Brazil, but with national input.

Products that use the Brasil brand and its variations reach monthly sales of R$ 43.7 million only on Alibaba platforms, which represent more than 60% of the local market. But the potential for Brazilian companies is evaluated as much higher than that. In the case of Brazilian turtles and the food for them, which also takes national ingredients, it is a natural species from Brazil, created in the Asian country since the 1980s. and legally marketed there by Chinese companies.

“The Chinese consumer already has a certain knowledge about products and ingredients from Brazil, which is excellent, but the brands that sell these products, unfortunately, are not Brazilian. So Brazil ends up losing a lot with this”, says Thiébaut.

The author of the work says that the guide also tries to dispel the misconception that the Chinese market, due to its vast population of more than 1.4 billion people, will guarantee high sales to any brand that enters the country. According to Thiébaut, the Chinese market is so competitive that success is very difficult to achieve without a strong entry strategy.

Adaptation of some products is also required. The Chinese consume acai powder to mix with other foods. Coffee sales focus on instant form. Several foods are sold in different sizes and flavors from those consumed in Brazil.

“Adopting in China the same modus operandi of the country of origin, without verifying the need to adapt the products, is usually the reason for the failure of large or small brands”, says the expert.

To reduce the entry barrier for small and medium-sized companies, Thiébaut says it is advisable to create a Loja Brasil, which brings together national sellers, as countries like Peru, Italy, Lithuania, France and Australia have already done.

“Our objective is to bring Brazilian brands of all sizes. It is not just a large company that should go to China through e-commerce. This guide aims to help these companies”, he says.

Data from 2020 shows that China already accounts for almost half of the world’s e-commerce, with a volume that exceeds the sum of online transactions in the United States, United Kingdom and Germany.

Born in 1992, Yadunandan approaches the world of video games thanks to two sacred monsters like Diablo and above all Sonic, strictly in the Sega Saturn version. Ranging between consoles and PCs, he is particularly fond of platform titles and RPGs, not disdaining all other genres and moving in the constant search for the perfect balance between narration and interactivity.
Previous Sydney Sweeney points out nudity scenes in her career that were ‘traumatic’: ‘I felt disgusting’
Next Fight Club | Creator reacts to movie ending change on streaming in China