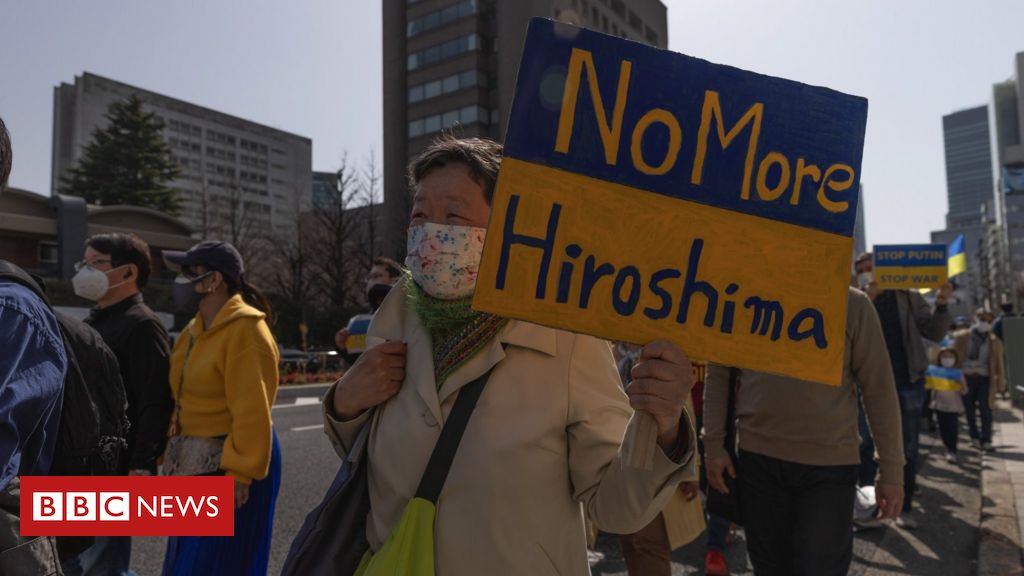 Fear of nuclear war: what Japanese trauma teaches us about the use of atomic bombs

Abhishek Pratap March 15, 2022 News Comments Off on Fear of nuclear war: what Japanese trauma teaches us about the use of atomic bombs 30 Views

Every day at 8:15 am sharp, a clock strikes atop a steel tower in the Peace Memorial Park in Hiroshima, Japan. The sound is a reminder of the exact time when the “Little Boy” was dropped on the city, the first atomic bomb in history, dropped by the United States on August 6, 1945, at the end of World War II (1939-1945).

Hiroshima was devastated by the bomb and it is estimated that around 40% of its 350,000 inhabitants died, many incinerated instantly. Today, the city preserves several landmarks in memory of the bombing, such as the emblematic dome of the only building in the surroundings that withstood the nuclear explosion.

It was in front of these ruins that anti-nuclear activists, peace activists and atomic bomb survivors have gathered to protest the war in Ukraine in recent days.

On the night of March 8, about 100 protesters held a vigil, organized by the NGO Hiroshima Alliance for the Abolition of Nuclear Weapons, lit 1,300 candles and placed them on the ground to compose the words “no to war”, ” No to nuclear weapons”, in English and Russian. “No war, no nukes, het boñhe”, said one of the participants in the megaphone.

Days earlier, the memorial on the banks of the Motoyasu River was also a meeting point for a small protest by Europeans based in Japan, including Ukrainians and Belarusians. Since the Russian invasion of Ukraine, which began on February 24, anti-war demonstrations have taken place in cities such as Hiroshima and Nagasaki, as well as cities such as Tokyo, Kyoto and Nagoya. These were not gigantic marches like those seen in Europe and the United States, but symbolic acts.

In Nagasaki, which was the target of the second American atomic bomb, about 40 activists gathered in Peace Park and observed minutes of silence starting at 11:02 am, the exact time of the August 9, 1945 explosion, which destroyed the city and caused more than 70 thousand deaths.

The grandson of “hibakusha”, as atomic bomb survivors are referred to in Japanese, activist Mitsuhiro Hayashida read a letter at the protest, public broadcaster NHK reported. “What happened in Hiroshima and Nagasaki must not be repeated,” said Hayashida. “Never again Hiroshima and Nagasaki” is a common message to refer to the risks of nuclear fission tragedy.

In Hiroshima, the brands are still in the city. Despite restrictions still in place due to the covid-19 pandemic, which caused the Hiroshima Peace Memorial Museum to temporarily close its doors, visitors still pass through the memorial, an open-air park intended to symbolize the human drama of a war.

On February 27, Russia issued an order placing its nuclear forces on a “special alert” state, considered the highest level. The invasion of Ukraine, where the Chernobyl nuclear power plant was occupied and the Zaporizhzhia nuclear power plant burned down, raised fears of a nuclear risk in Eastern Europe, which had a strong repercussion in East Asia.

This is because Japan has already lived through the two tragedies that the world currently fears: it was the target of atomic bombs dropped by the United States in 1945, and the scene of an astonishing nuclear accident at the Fukushima plant, caused by a mega-earthquake and a tsunami in 2011 – considered the most serious nuclear accident since the explosion of a reactor at the Chernobyl facility in 1986, in the then Soviet Union, now Ukraine.

About 50 Japanese academic institutions published notes in several languages ​​criticizing the invasion of Ukraine, an unprecedented mobilization, especially in the case of a conflict abroad. Among the institutions are the universities of Fukushima, in the north of the archipelago, and those of Hiroshima and Nagasaki, in the south.

On the campus in Nagasaki, where there is a medical course famous for dealing with the impacts of radiation, as well as a long exchange with Ukrainian centers in the area of ​​assistance to victims of Chernobyl, President Shigeru Kohno signed a strong note, outlining the threats of the Russian government as “unacceptable”. “We strongly urge Russia to stop the armed aggression as soon as possible and reach a peaceful way out through diplomacy,” Kohno posted.

It is considered unlikely that Russia will actually use nuclear weapons in Ukraine. But the fact that it has happened before, in Japan, contributes to the persistence of fear that this will happen again without even defining a “why”. To this day, for example, there is no consensus among historians on the “necessity” or “inevitability” of the dropping of atomic bombs by the United States to end World War II – a conflict in which Japan was together with Nazi Germany. and fascist Italy; and the United States was allied with France, the United Kingdom, and the Soviet Union.

“Simply put, it can be said that to this day, on the one hand, there are authors (such as Paul Fussell and Herbert Feiss) who follow the official narrative of the administration of US President Harry Truman that said that the Japanese were not surrendering even in the and that Japan, being an archipelago of difficult access, would require a large number of North American casualties to be taken by land”, says historian Angelo Segrillo, coordinator of the Laboratory of Asian Studies at the University of São Paulo.

“And on the other hand, there are authors (such as Gar Alperovitz and William Appleman Williams) who deny that this was the main motivation behind the launch, citing other political considerations – for example, the need to frighten the USSR into submission in the post-war”, he adds. In the post-war period, the USSR and the United States were already on opposite sides and fighting an arms race.

“Nuclear weapons have such destructive power that for a long time we thought they would never be used by responsible powers,” says Segrillo. “The latest events have shown that, especially in the current times of hegemonic transition, rational and responsible behavior regarding the use of these weapons should not be taken for granted, but constantly cultivated, encouraged and watched.”

‘No one, anywhere in the world, should go through what we went through’

“There are many lessons [da história do Japão], but I believe the most important is that, both in the atomic bomb and in the nuclear accident, it is the common population who suffers. Whoever decides to develop and use nuclear weapons and energy is not the one who faces these risks and consequences, in addition to the radiation that remains dangerous for generations”, says researcher Caitlin Stronell, from the CNIC (Citizens’ Nuclear Information Center), one of the largest organizations anti-nuclear civilians in Japan, and editor of the digital magazine Nuke Info Tokyo.

“The biggest lesson, one that perhaps Japan is also still facing, is that we should question the authorities, listen to other voices and raise our own if we think something is wrong,” he adds.

The issue that Japan may also be facing, as Stronell refers to, is the fact that the archipelago still prioritizes nuclear energy over energy alternatives, even after tragic nuclear experiences and decades of pressure from activists and academics. Furthermore, the Japanese government has not yet signed the United Nations Prohibition of Nuclear Weapons Treaty to ban atomic arsenals, an international agreement proposed in 2017. The United States has not ratified the document either.

“Our energy future must be democratic and secure, it must not poison the environment. In other words, nuclear energy has no chance”, says the researcher, remembering that this Friday, March 11, marked the 11th anniversary of the Fukushima.

According to Stronell, the very presence of plants is already a risk in a territory under conflict. “The war in Ukraine clearly indicates that the so-called ‘security’ with nation-states threatening each other will never lead to peace. Neither will the nuclear reactors of ‘non-nuclear’ states. [os signatários do tratado das Nações Unidas] can be considered peaceful, as reactors can be used as a threat, as are nuclear weapons. Power plants create all kinds of vulnerabilities, especially in times of crisis”, he considers.

Born in Australia but based in Japan since 1990, Stronell was a high school student when she first visited Hiroshima Peace Memorial Park. The Cold War (1947-1991) had not yet ended and at the time it was not very common to find foreigners living in Japan – it was common to assume that they were all Americans, due to the US occupation after Japan surrendered.

“I had mixed feelings going to Hiroshima. If they thought I was American, they would hate me, I figured. And I would understand. But on the contrary, upon entering the museum, a volunteer guide offered to explain the exhibits to me. I saw scars. in his hands, he was a survivor. He was so friendly and answered my questions for 2 or 3 hours. It was the opposite of what I was expecting.”

“In the end, I asked: how can you be so kind to me? He looked me in the eye and replied: because the most important thing is that it never happens again; no one, anywhere in the world, should go through what we went through. “