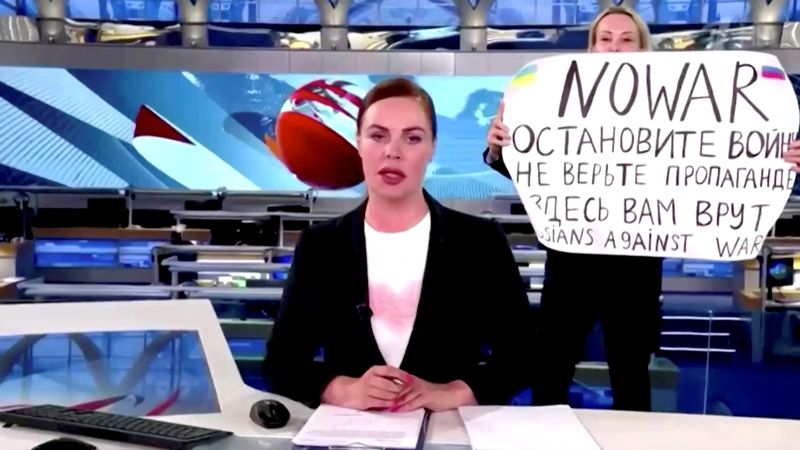 The image went around the world: a producer raises an improvised poster and interrupts the main Russian TV news, denouncing the war. After this unprecedented protest, Marina Ovisannikova’s whereabouts were unknown. Detained without her lawyers being able to contact her, less than a day later she was already on trial. According to a decree by Vladimir Putin, journalists are prohibited from claiming that there is a war going on in Ukraine (they are obliged to cite only a “special operation”). The penalty for disobeying is up to 15 years in prison.

The boldness of the prime-time TV worker shows the difficulty Putin has in controlling information in the age of the Internet and social networks. He tries to use the same instruments as Stalinism (censorship, intervention, arrests and intimidation), but life has become more difficult for dictators. The banning of Facebook, Instagram, Tik Tok and other networks does not prevent the population from using VPNs and alternative networks to access their sources and disseminate information. Russia is too large and diverse to be subjected to the same kind of medieval censorship as in North Korea, for example. And there is a nascent middle class that is already used to modern communication. It will not submit to the tyranny of censorship like past generations. Young people today pay attention to dissident leader Alexei Navalny, who can send messages via social media even while imprisoned in Siberia.

There is a silent battle going on in Russian society. The local press, which had honorable exceptions to independent work (journalist Dmitry Muratov, from the investigative newspaper Novaya Gazeta, even won the Nobel Prize), was decimated after the invasion of Ukraine. All vehicles were forced to close. Overseas channels and newspapers, such as the BBC and the New York Times, had to withdraw correspondents. But this can be temporary. Putin will not be able to impose the law of silence indefinitely, as the rebel producer made clear.

It’s no use Putin tightening his censorship. Political opening in your country is inevitable. More than 30 years after the fall of communism, it is impossible to turn history back on its head and re-establish a totalitarian regime. By invading the neighboring country, Putin was betting that the West was “decadent” and weak and that he would be able to revive the Russian empire by selling nationalism to his people on the basis of falsehoods and disinformation. He may be brewing the end of his own kleptocracy.