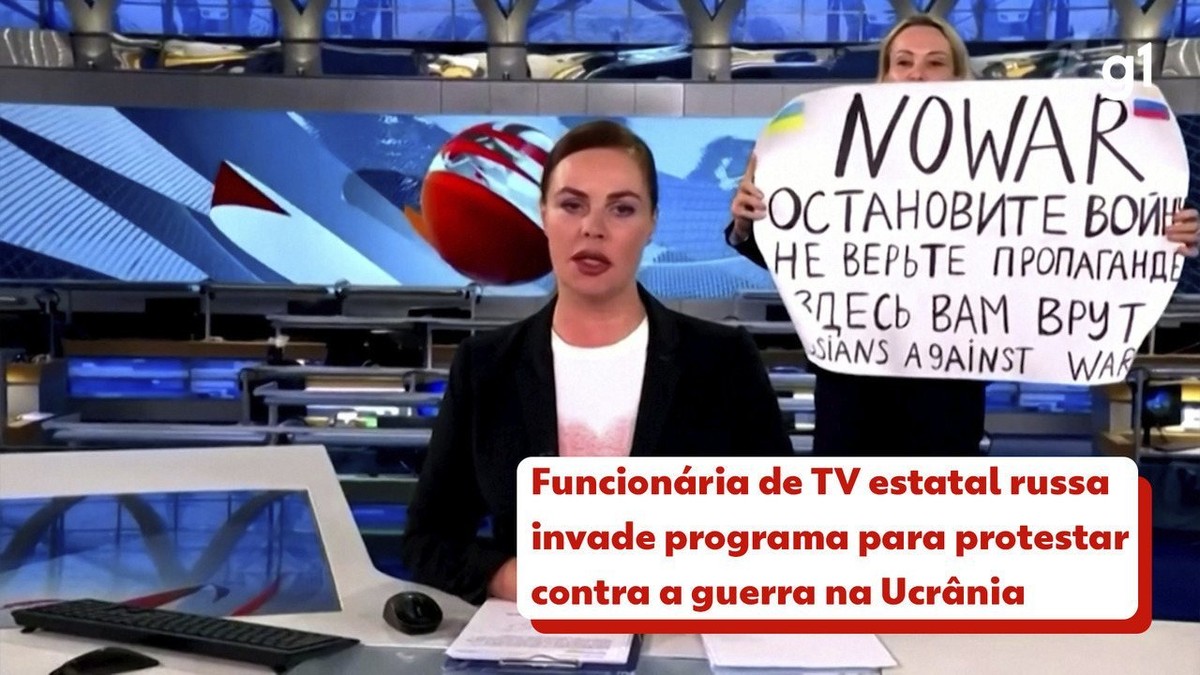 Marina Ovsiannikova, an employee of a Russian television channel who invaded a news program to denounce the offensive in Ukraine, appeared in court on Tuesday (15) for having spoken out illegally, according to information from the Russian Justice.

The hearing took place at the Ostankino district court in Moscow.

The Channel 1 employee was fined 30,000 rubles (about R$1,400) and is liable for an “administrative infraction” for “demonstrating without authorization from the Russian government,” Novaya Gazeta reported.

The penalty of illegal protest could lead to ten days in prison. Marina was not immediately charged with the crime of publishing false information about the Russian military, which carries a maximum penalty of 15 years in prison.

At the trial, Ovsiannikova pleaded not guilty.

“I don’t recognize my guilt, [eu] I remain convinced that Russia is committing a crime… and that it is the invader of Ukraine,” she said.

Earlier, his lawyer Daniil Berman came to consider that his client was at risk of being convicted under this new law.

“There is a good chance that the authorities will decide to set an example so that other critics will shut up,” said the lawyer, explaining that he has not yet been able to meet with his client.

Ovsiannikova, in her 40s, is from Odessa, Ukraine, and works at the Pervy Kanal broadcaster, a vehicle very close to Russian power.

On Monday night, she burst into the news and stood behind the presenter with a sign that read: “No to war, don’t believe the propaganda. Here they are lying to you.”

In early March, Russian authorities passed a law that punishes the publication of “slanderous information” about the Russian military with a penalty of up to 15 years in prison.

Marina Ovsiannikova, a mother of two young children, could be included in this law, according to her lawyer.

In a video recorded before going on the news, Ovsiannikova explained that her father is Ukrainian and her mother is Russian and that she cannot stand the spread of lies that turn Russians into zombies.

Since then, his Facebook account has received tens of thousands of messages of support. Today, a spokesman for EU diplomacy chief Josep Borrell praised his gesture.

Also on Tuesday, the French government said it was willing to offer “consular protection” to the Russian journalist, announced President Emmanuel Macron, who asked Russia to clarify its situation.

“We will initiate measures to offer her protection, at the embassy or in asylum,” Macron told reporters, assuring him that he would propose this to his Russian counterpart, Vladimir Putin, in their next phone conversation.

For weeks, the French president has been trying to mediate between Putin and his Ukrainian counterpart, Volodymyr Zelensky: at first, to avoid conflict; and now, to put an end to this war.

With less than a month to go before the presidential election in France, Macron declared today that he does not rule out traveling to Moscow or Kiev, but that there are still “no conditions” to make these trips “in the coming days”.