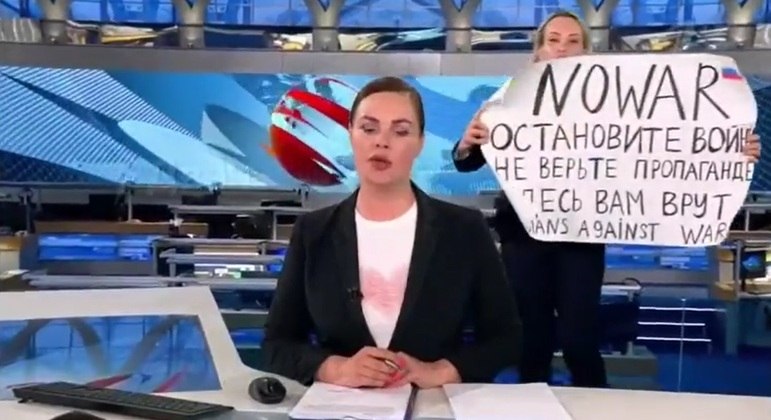 Whereabouts of Russian journalist who protested on TV remains unknown

The whereabouts of journalist Marina Ovsyannikova, who on Monday invaded the set of a Russian TV station and showed a poster against the invasion of Ukraineremains unknown, reported on Tuesday the portal OvdInfolive, an NGO that defends detainees over the protests in Russia.

According to the portal, the journalist can be accused of the crime of “falsehood” in relation to the actions of the Russian Army, contemplated in the Penal Code of the Russian Federation, and, due to the reform approved by Parliament on the 4th, she can be sentenced to up to 15 years in prison.


Kremlin spokesman Dmitry Peskov today described Ovsyannikova’s attitude as that of a “hooligan”: “As for this woman, it is an act of vandalism. The channel and the respective agencies are investigating this.”

Marina Ovsyannikova, a journalist for the TV channel Channel One Russia, yesterday broke into the live broadcast of the nightly news vremya shouting slogans and holding a sign against the war in Ukraine. She was then arrested.

“No war. End the war. Don’t believe the propaganda. They are lying to you. Russians against war”, read the journalist’s poster.

At the same time, she shouted “stop the war” and “no war” several times in the middle of the broadcast.

The channel, one of Russia’s main state television stations, confirmed the incident and opened an investigation into what it called an “accident with an intruder”.


More than 15,000 people have been arrested in Russia since the invasion of Ukraine began 20 days ago.

The journalist said in a message on social media, before carrying out her protest action, that what was happening in Ukraine was “a real crime” and that Russia was “the aggressor”.

“The responsibility for this crime rests solely with the conscience of one person, and that person is Vladimir Putin,” she said.

“Russia must immediately stop the fratricidal war so that our united people can still be reconciled,” the journalist said in a message posted on social media and posted on her Twitter account by the opposition portal OvdInfolive.

Another journalist, Lilia Gildeeva, who had worked for the station since 2006, left Russia and wrote a resignation letter from abroad. “First I left, I was afraid they would just not let me go, so then I wrote a statement,” Gildeeva said in her message, which she sent today to Russian blogger Ilya Varlamov.

Lilia Gildeeva has worked for the channel since 2006 and in the past her professional career has been recognized by President Vladimir Putin himself.