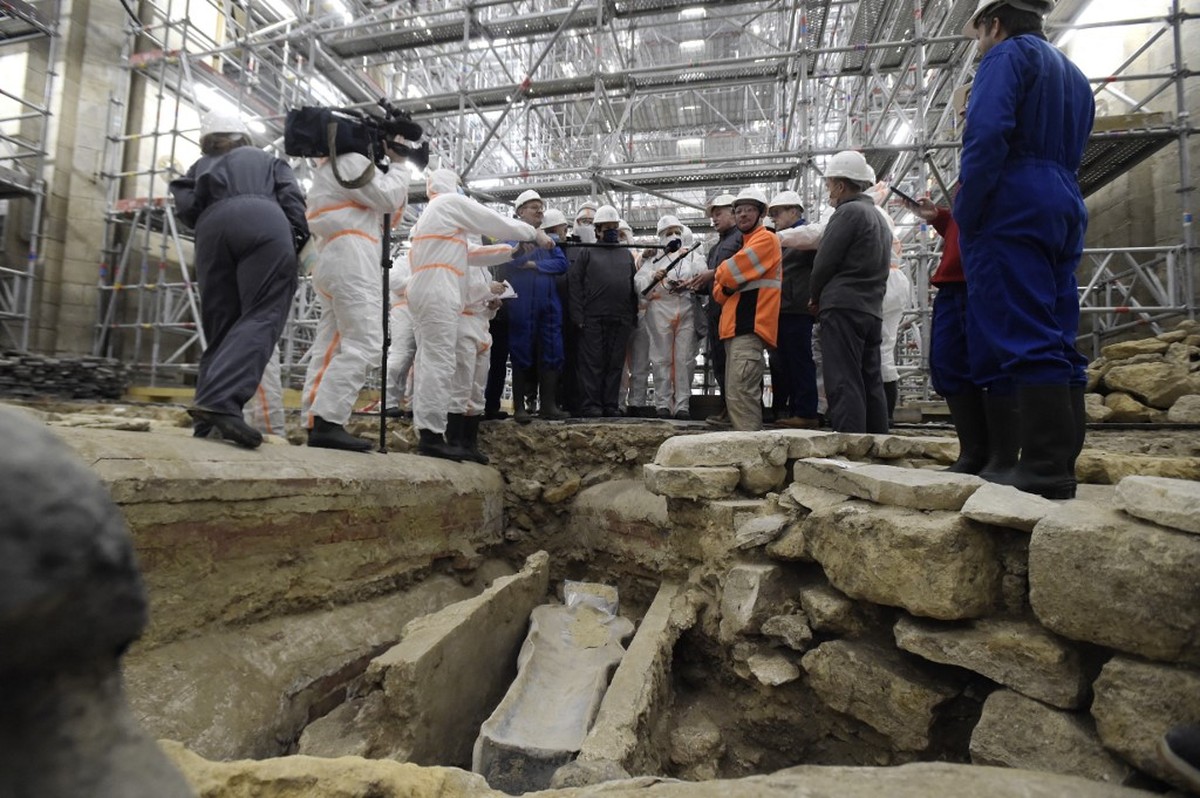 Several tombs and one lead sarcophagus : the bowels of the Notre-Dame de Paris cathedral, under reconstruction, have revealed important archaeological remains that may date back to the 14th century.

The remains were found at the point where the central aisle of the nave meets the side structure (transept) of the cathedral. no one knows who

Notre-Dame suffered a fire that brought down the entire roof structure on April 15, 2019. As part of the reconstruction works, a massive scaffolding around 100 meters high is to be installed at this intersection to rebuild the tower.

To ensure the solidity of the soil, excavations were started at the site.

This work revealed an entire underground heating system, existing since the 19th century. Among the structures, made of bricks, the sarcophagus was found, whose lead appears deformed by the weight of the earth and stones.

A few meters away, archaeologists are hard at work unearthing another valuable find: the remains of an ancient jubé, or alto choir.

The jube was a stone choir, adorned with carved figures, which for centuries separated the choir from the rest of the church. Notre-Dame was built around 1230 and destroyed in the early 18th century.

The Catholic Church has changed its liturgy over the centuries, and this altar, which separated the faithful from the office, has lost its meaning, experts explained.

As was common at the time, the stones were reused in the same work.

This Tuesday (15), a few centimeters from the surface, an archeologist was gently cleaning his carved and outstretched hands, as if begging.

In plastic baskets, already removed from the ground, were the bust of a bearded man and carved vegetables, with traces of the paint with which they were created.

“The discovery of this sarcophagus will allow us to better understand the funerary practices and rites” of the Middle Ages, explained Dominique García, president of the National Institute of Archaeological Research.

These are not the first human remains found at Notre-Dame, which since its construction has served as a cemetery, especially for those responsible for the temple or religious figures.

But they had never found a sarcophagus so well preserved.

So far, archaeologists have managed to introduce a mini endoscopic camera inside the sarcophagus. “You can see bits of fabric, hair and a pillow of leaves on top of the head, a well-known phenomenon” when religious hierarchs were buried, explains Christophe Besnier, the archaeologist responsible for the excavation.

“The fact that these plant elements are still found inside shows a priori a very good state of conservation” of the body, added this expert.

It is currently unknown who the body might have been, although the location suggests it was an important character, early in the life of a legendary temple.

“It’s a great emotion, this cathedral represents the entire history of Paris, and to find yourself in front of these remains is extremely impressive,” said Culture Minister Roselyne Bachelot at the foot of the sarcophagus.