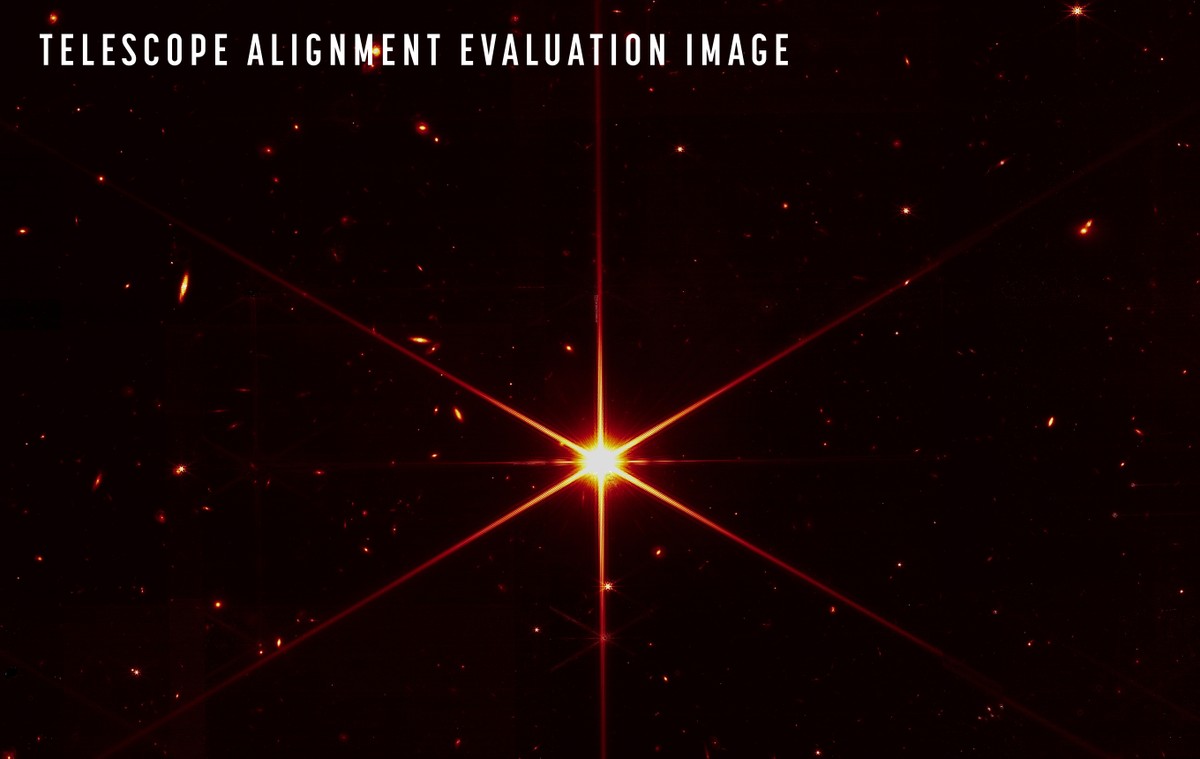 NASA announced on Wednesday (16) that the James Webb telescope has completed another key step in aligning the observatory’s primary mirror and has released the final image of the process known as “fine calibration”.

According to the American space agency, the objective of this phase was just to focus on the bright star in the center of the image above (called 2MASS J17554042+6551277) to evaluate the telescope alignment, but Webb’s equipment is so sensitive that galaxies and other stars seen in the background could also be observed.

“We have fully aligned and focused the telescope on a star, and the performance is exceeding spec. We are excited about what this means for science,” said Ritva Keski-Kuha, deputy manager of the Webb Optical Telescope Element at NASA Goddard Center. “Now we know we built the right telescope.”

In the next six weeks, the James Webb team will complete the remaining steps in aligning the telescope and its instruments.

According to NASA, at this stage of the process, an algorithm will evaluate the performance of each instrument and then calculate the final corrections needed. After that, the final Webb alignment step will begin and the team will adjust any small residual placement errors in the mirrored segments.

A special lens inside the NIRCam also took a “selfie” of the Webb’s mirror segments. According to NASA, the segments are bright because they are all collecting light from the same star at the same time. — Photo: NASA/STScI

The full alignment is expected to be completed by early May. or even before that and that the first high-resolution images of Webb are released in the American summer (between June and September).

Understand the importance of the James Webb telescope

James Webb will allow astronomers to literally see things in the Universe that they couldn’t see before – like the first galaxies that appeared in it.

This is possible for two reasons: the first is that the James Webb is very large: its primary mirror is 6.5m in diameter (almost 3 times larger than that of the Hubble telescope, its predecessor).

The second is that it can see in infrared. Hubble could only see a limited range of this wavelength.

As infrared light has a longer wavelength than others, James Webb will be able to look further back in time – and see the first galaxies that formed in the early Universe.

(VIDEO: Understand below the importance and how the James Webb Space Telescope will work.)

Understand the importance of the James Webb telescope, launched this Saturday (25) by NASA

Raju has an exquisite taste. For him, video games are more than entertainment and he likes to discuss forms and art.
Previous Francis with Kirill: Church must use Jesus language, not politics
Next What can be deducted in the IR 2022 statement? Check limits for health, education, dependents and more