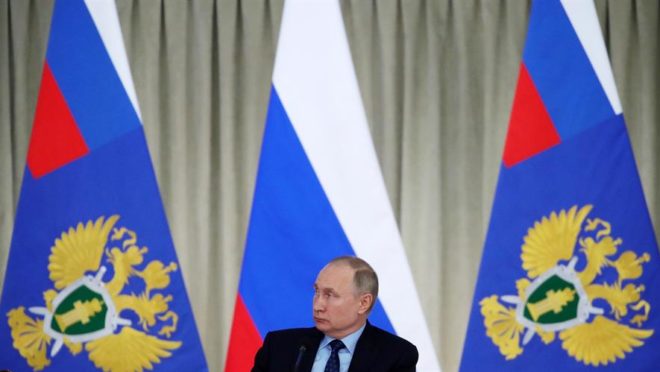 Who are the Russian oligarchs who support Putin

Abhishek Pratap March 17, 2022 News Comments Off on Who are the Russian oligarchs who support Putin 45 Views

The collapse of the Soviet Union in the 1990s and the rise of President Boris Yeltsin would mark the beginning of an era of privatization in Russia. The seventy years of state domination, however, would not be transformed into a free and competitive market: the great protagonist of the sales of the Soviet state-owned companies was corruption. Famous was the scheme that transferred stakes in twelve large government natural resources companies to a select caste of handpicked tycoons in exchange for loans to support the massive federal budget.

Thus emerged the first generation of Russia’s great oligarchs, wealthy businessmen who benefited from contact with the West while subsidizing the Kremlin’s exploits. With these practices, Yeltsin essentially left his government at the mercy of these groups, in the kind of relationship that is now understood as “crony capitalism.”

Then came Vladimir Putin’s turn. And with it, a new wave of rich beneficiaries of state contracts. Large infrastructure, safety and health companies involved in kickback schemes would take over the market. The problem is that the former KGB agent who is now leading the invasion of Ukraine was never fond of the idea of ​​ceding power to the country’s financial elite – and, measure for measure, he began to turn the tables. If, in Yeltsin’s day, it was the oligarchs who controlled the Kremlin, Putin would buy back much of the control of the former state-owned companies and keep the oligarchs out of politics in exchange for turning a blind eye to their shady dealings.

This class of businessmen was affected by the sanctions applied mainly by the United States, the United Kingdom and the European Union because of the invasion of Ukraine that began on February 24th. “The United States and governments around the world will work to identify and freeze the assets that Russian elites and their families hold in our respective jurisdictions – their yachts, luxury apartments and private jets,” the White House said in a statement. “We’re going after your illegitimate gains,” added President Joe Biden. So far, at least eight names make the list.

In addition to the tycoons who built their empires before the arrival of Putin and those who made their fortunes with their state-owned companies, another class of oligarchs operates in the country and suffers, in part, from Western measures. According to Stanislav Marcus, professor of International Business at the University of South Carolina, it is necessary to differentiate between Putin’s personal friends – such as banker Yuri Kovalchuk – and also the “siloviki”, former members of the KGB and security services. of Russia that became the president’s strong arms. With no stimulated wealth value and low profile, the most prominent of them is Igor Sechin, the president of the oil company Rosneft.

Also part of this core are Defense Minister Sergei Shoigu, former head of domestic intelligence and now secretary of the Russian National Security Council Nikolai Patrushev and foreign intelligence chief Sergei Naryshkin. According to a Financial Times report that heard from Russian oligarchy researchers and people who have had professional contact with these men, “a clear line must be drawn between the siloviki and the broader Russian elites.”

Among some members of the second group – more heterogeneous and, above all, disunited – the war in Ukraine is starting to cause discomfort, see the case of Roman Abramovich, president of Chelsea Football Club. Mikhail Fridman, chairman of the Alfa Group (already severely hit by Western sanctions) and one of the surviving ex-oligarchs of the 1990s, called for an end to the war, as did aluminum entrepreneur Oleg Deripaska (see, at the end of the article, a list of top names).

In the eyes of some of these analysts and former officials, however, Putin doesn’t seem to give a damn what happens to these tycoons – on the contrary. A Forbes report that also heard from inside sources and Kremlin observers also noted that the president may actually be satisfied with Western sanctions, which would force oligarchs to “bring their billions to Russia.”

According to former Bank of America Russia president Charles Lingelbach, heard by the report, Putin’s true allies, such as Kovalchuk and the Rotenberg brothers, were already sanctioned in 2014 and have learned to protect themselves since then. As for the rest of the elite, Putin is “quite indifferent”, says Lingelbach. The most recent example of this contempt would be the virtual meeting with the business community on the day the war began, in which the president spoke and left, without giving the floor to any of the billionaires present.

The siloviki, on the other hand, while still subject to Putin’s will, share the same resentment inherited from the failure of the 1990s reforms and the end of the Soviet bloc, reproducing the same contempt for the liberal elites of Moscow and St. so that isolation from the West tends to be less bothersome.

“Above all, for profound historical, cultural, professional and personal reasons, the siloviki and the Russian official elite in general are fully and irrevocably committed to the idea of ​​Russia as a great power and a pole of a multipolar world,” writes the journalist Anatol Lieven. “They seem prepared, if need be, to fight relentlessly for a long time, and at immense cost and risk to their regime, to prevent [a vitória da Ucrânia] that happen”.

Born in Uzbekistan still integrated into the Soviet Union, Alisher Usmanov is one of Putin’s favorite oligarchs and one of the richest. He is described by the European Union as the “official entrepreneur” who helps Putin solve business problems. He is currently a director of USM Holdings, a large conglomerate that involves mining and telecommunications, including Russia’s second-largest mobile network, MegaFon.

The Chelsea FC president is one of the most famous Russian billionaires in the world – but he is probably one of the least influential sanctioned. Some suggest that his relationship with Putin is not so good – Abramovich is one of the oligarchs that emerged during Boris Yeltsin’s presidency – but the United Kingdom maintains that it made illicit profits through this partnership through lucrative contracts for the World Cup in 2018, for example.

Deripaska is among the oligarchs who have lost a lot of money and prestige since Putin came to power. Since the 1990s, he has been accused of involvement in money laundering schemes, bribery, extortion and even involvement in assassinations operated by organized crime. He turned to the president amid the 2008 crisis and since then, according to US and UK reports, has become “closely associated” with Putin. Still, he is one of the few to speak openly about the war, calling for peace talks on his networks.

Seen as close friends of Putin, the Rotenberg brothers own a pipeline construction company that provides services to the state-owned Gazprom – responsible for the controversial Nord Stream 2, which passes through Germany. Also ahead are the SGM group and the SMP private bank. Because of their proximity to the president, they were already victims of sanctions during the Crimean war in 2014.

Siloviki leader Igor Sechin has been close to Putin for many, many years: he is said to be one of the president’s most trusted and closest advisers, as well as his personal friend. Some say the two speak daily and are believed to have been KGB colleagues in the 1990s, although Sechin has never openly admitted it. Discreet and ruthless with opponents, he was nicknamed by the Russian press as Darth Vader. After spending decades between politics and business in high-profile positions, he became Putin’s deputy prime minister when he took office and is now director of Russia’s Petrobras, Rosneft.