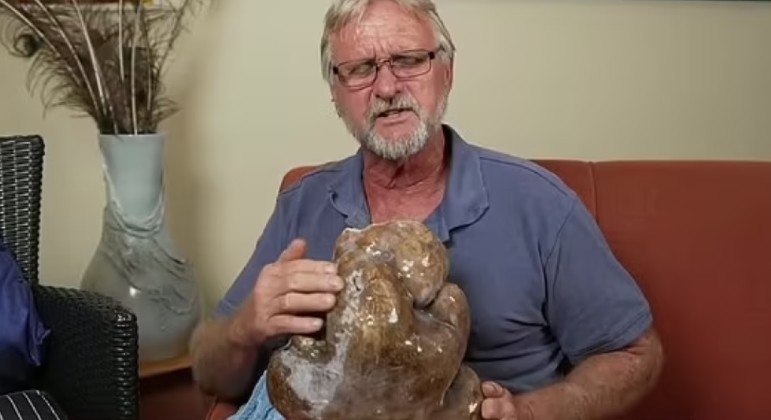 The saga of “Dug”, the “heaviest potato in the world”, ended on a sad note for the New Zealand couple who found it. A DNA test done to confirm that the tuber was real revealed that Dug is not a potato.

The nearly 8-kilogram vegetable is actually “a type of gourd tuber”, according to a Science & Advice for Scottish Agriculture survey.

Dug (the couple previously called the “potato” Doug, before taking out a letter) was unearthed by Colin and Donna Craig-Brown in August 2021 on their farm. When requesting the record of the record in the Guinnessa sample of the plant’s DNA was requested, and the devastating result was delivered on Sunday (13).


“Dear Colin, unfortunately, the specimen is not a potato, but a tuber of a type of gourd. For this reason, unfortunately, we have to disqualify the inscription [para o recorde]”, said the email sent by Guinness.

The couple was disappointed, but still maintains respect for the giant vegetable.

Doug now has two goals. The first is to find out how Dug was grown — the farmer’s best lead so far is a seedling he bought, which he speculates is a cross between a gourd and a cucumber.

“I’m trying to rationalize how this happened,” he told the site, still confused in his quest to understand how nature acted.

The second goal is to actually grow the heaviest potato in the world. “It inspired me to grow my own potato, and I’ll really take care of it,” Colin said.


“I’m really going to give it my all and try to grow the biggest potato in the world,” he concluded.

Confirmation that Dug is not a record-breaking vegetable freed the farmer duo to dispose of the tuber and turn it into puree and vodka, according to the plans they had already made. Goodbye, Dug!


Dug’s story recalls the discovery of another giant potato, in the shape of a human foot, which was born in Santa Catarina in 2018. Remember this intriguing find!