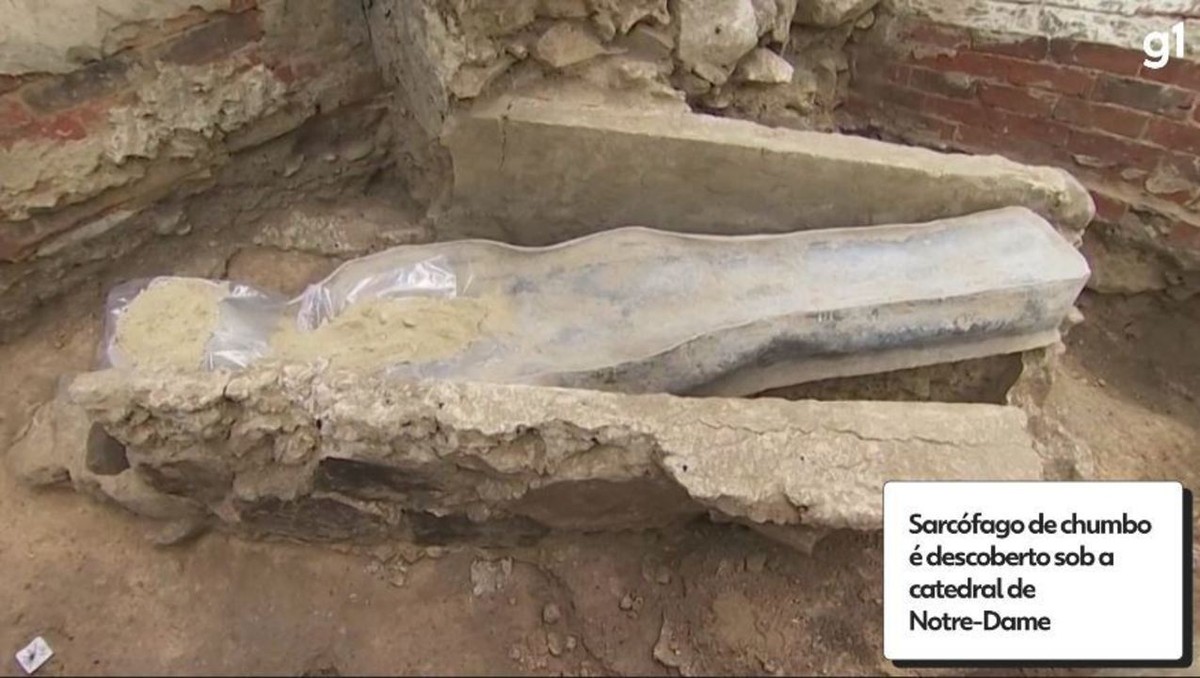 Notre-Dame Cathedral caught fire on April 15, 2019. As part of the reconstruction work, excavations have begun to support a scaffolding around 100 meters high that is to be installed on the site.

This work revealed, among other objects, a sarcophagus entirely made of lead. Below are some questions and answers about this finding:

The excavation work revealed an entire underground heating system, existing since the 19th century. Among the structures, made of bricks, the sarcophagus was found, whose lead appears deformed by the weight of the earth and stones.

The remains were found at the point where the central aisle of the nave meets the side structure (transept) of the cathedral.

What’s inside the sarcophagus?

So far, archaeologists have managed to introduce a mini endoscopic camera inside the lead sarcophagus. They could see bits of fabric, hair and a pillow of leaves over the top of a head.

“The fact that these plant elements are still found in the interior shows a very good state of conservation”, said the archaeologist responsible for the excavation, Christophe Besnier.

Who was buried in the sarcophagus?

It is currently unknown who the body could have been, although the location suggests it was an important character.

According to the archaeologist in charge, it was common for religious leaders to be buried with a pillow of leaves, like the one found inside the sarcophagus.

What else was found at Notre-Dame?

In addition to other graves, which was to be expected, as the cathedral served as a cemetery in the past, archaeologists unearthed the remains of an ancient jube.

The jubé was a structure made of stone, adorned with carved figures, which served to separate the choir from the rest of the church.

The one at Notre-Dame was destroyed in the early 18th century and the stones that archaeologists found had been reused in the same work.

Is it normal for an ancient sarcophagus like this to be made of lead? Has anything like this been found before?

There are other records of lead sarcophagi found in numerous locations, even much older. The website of the Metropolitan Museum, in New York, indicates that in the Roman Empire, for example, they were more common in eastern provinces, as in the areas where Syria and Israel are today. But they have also been found in western Roman provinces, such as in Great Britain, where the Romans exploited lead mines.

In a report on one of these Roman burials, the magazine “National Geographic” points out that lead coffins found throughout Europe housed soldiers, elite members of Christianity and even women gladiators.

“In fact, many lead coffins contain high-ranking women or teenagers rather than men,” explains Jenny Hall, curator of Roman archeology at the Museum of London, in the report.

The sarcophagus found in Notre-Dame is not from the Roman Empire, it is later (from the Middle Ages).

How were lead used in the Middle Ages?

According to the encyclopedia Britannica, lead had the advantage of being easily manipulated and offering great resistance to weather conditions, in addition to being a low-cost material.

Lead was used in a variety of situations, from larger structures, such as roofs, to small objects, such as brooches and medals. In some cases, it was even used to pretend to be a richer product, imitating products made of nobler materials.

How important is discovery?

“The discovery of this sarcophagus will allow us to better understand the funerary practices and rites” of the Middle Ages, explained Dominique García, president of the National Institute of Archaeological Research.

They are not the first human remains found at Notre-Dame, but they have never found a sarcophagus as well preserved as this one made of lead.

Remember what the Notre Dame fire was like in 2019