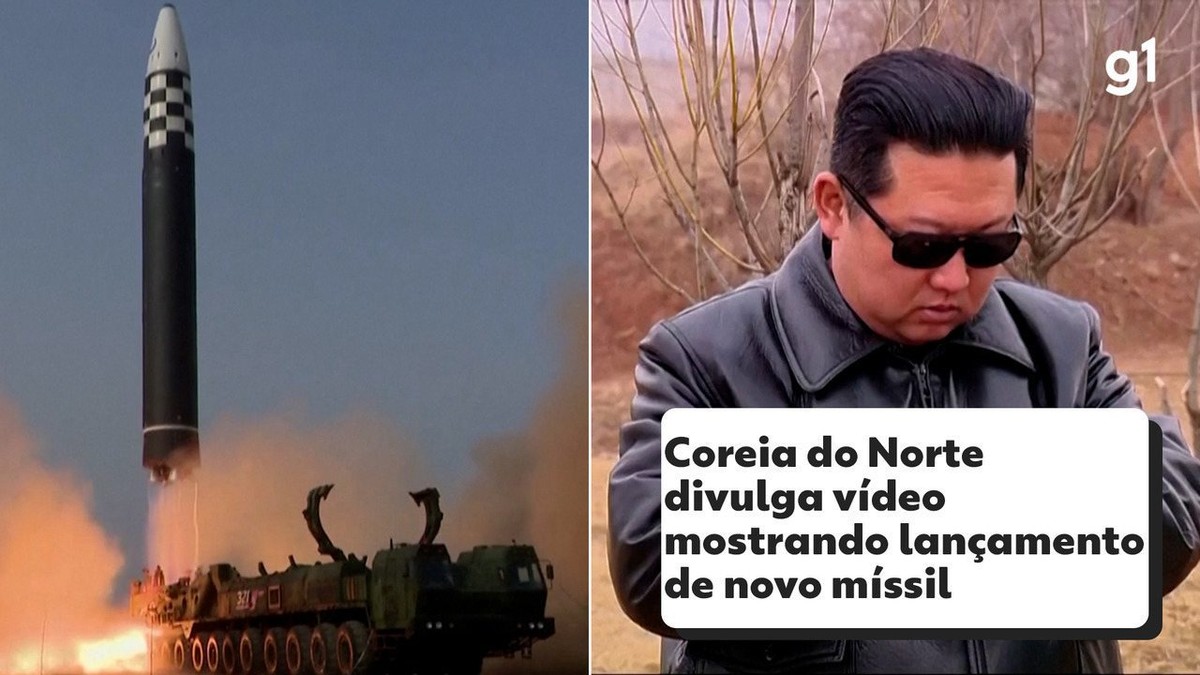 Leather jacket. Sunglasses. Kim Jong-Un, the leader of North Korea, walking in slow motion accompanied by two officers. Behind them, the new intercontinental ballistic missile (ICBM). Eager glances at the clock. Countdown. An ok sign. The missile is launched. Scene ends with the leader walking victoriously alongside soldiers.

It looks like a scene from a fictional movie, but it was with this cinematic treatment – ​​and a dubious performance – that North Korean state TV released the ballistic missile tests this Friday (25).

North Korean leader Kim Jong-Un with an intercontinental ballistic missile (ICBM), in a video by the national press — Photo: KCNA via Reuters

The country’s national press has been looking for new ways to tell their stories. For this release, they turned their leader into the star of a fake action movie.

On social media, they are calling Kim “Top Kim Jong Un”, comparing the scene to the movie “Top Gun”, starring Tom Cruise. Others remembered the music video for the song “Gangnam Style”, South Korea’s worldwide success. They said it is now “Pyongyang Style”, using the name of the North Korean capital.

It’s not the first time Kim Jong-Un has gained viral internet fame. In 2019, he appeared in images riding a white horse on a sacred mountain in the country. The national press described the tour as a ‘major event of fundamental importance’ for the country.

North Korean leader appears mounted on a white horse in images released by the government on October 16, 2019 – Photo: Handout

North Korea’s latest launch was a large new intercontinental ballistic missile (ICBM), North Korean state media reported on Friday, in a test that leader Kim Jong-Un said was carried out to demonstrate its power. of its nuclear force and deter any US military move.

Thursday’s launch was North Korea’s first full ICBM test since 2017. Flight data indicated the missile flew higher and farther than any of North Korea’s previous tests before crashing into the sea at west of Japan.

Dubbed the Hwasong-17, the ICBM would be the largest liquid-fueled missile ever launched by any country from a mobile launcher, analysts say.

Image of the ballistic missile Hwasong-17 released in October 2021 by North Korea – Photo: Reproduction via Reuters

Its range and size also suggest North Korea plans to use it with warheads that can hit multiple targets or with decoys to confuse defenders, analysts said.

“Strategic forces … are fully ready to counter any dangerous military attempts by the US imperialists,” Kim said as he supervised the launch, according to KCNA.

The North’s resumption of testing weapons believed to be capable of hitting the United States poses a direct challenge to President Joe Biden as he responds to Russia’s invasion of Ukraine.

It also raises the prospect of a new crisis following the election of a new conservative South Korean government that has promised a stronger military strategy towards North Korea.

South Korea’s conservative president-elect Yoon Suk-yeol said North Korea had nothing to gain from the provocation.

China, North Korea’s only major ally and neighbor, called for restraint on “all sides” after the test.