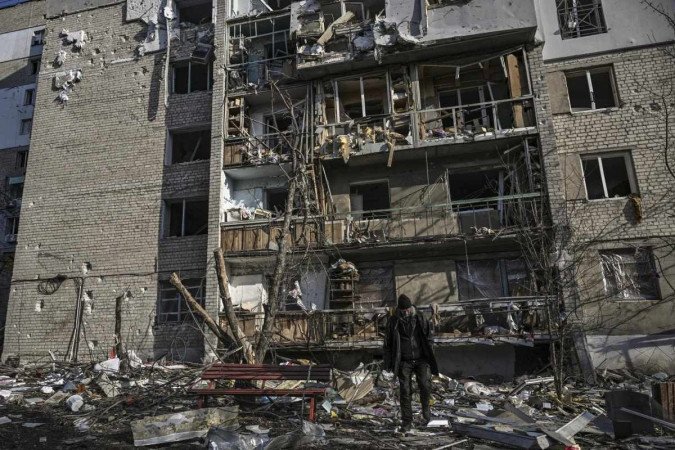 Russia announced this Friday (25) that it will focus its offensive in Ukraine on the “liberation” of the east of the country, after a month of fighting and bombing that failed to break the resistance of this former Soviet republic.

According to reports, Russian troops were forced to retreat to regions around Kiev and faced a counter-offensive in Kherson (south), the only major city they had been able to take since the invasion began on 24 February.

“The Ukrainians are trying to take over Kherson,” said a senior US Department of Defense official, who requested anonymity. “We can’t say who is in control of Kherson, but it’s not as heavily under Russian control as it used to be.”

In the Polish city of Rzeszow, 80 km from the Ukrainian border, US President Joe Biden praised the resistance of the Ukrainian people and once again called Russian President Vladimir Putin a “war criminal”.

Authorities fear that last week’s bombing of a theater in Mariupol that served as an air-raid shelter has caused as many as 300 deaths.

France, Turkey and Greece will launch “in the coming days” a “humanitarian operation” to try to evacuate civilians from the city, French President Emmanuel Macron announced after a European Union (EU) summit in Brussels.

“I ran away, but I lost all my family, I lost my house, I’m desperate,” Oksana Vynokurova, a 33-year-old woman who managed to leave Mariupol and reach Lviv, in the west, told AFP.

Svetlana Kuznetsova, another refugee who fled on the same train, said that “there is no more water or electricity in Mariupol. We live in basements and light fires to cook.”

Offensive concentrated in the east

The Ukrainian air force command in Vinnitsa (center) was hit by a salvo of cruise missiles, which caused “significant damage”, the Ukrainian Armed Forces said.

Despite the attacks, Russian troops suffered significant casualties and, for a few weeks, have not made any significant progress.

The Russian army acknowledged on Friday that 1,351 of its soldiers had died and 3,825 were wounded since the start of the military offensive on February 24, and accused Western countries of making a “mistake” in delivering weapons to Kiev.

In what could be a major change of direction, the Russian army has announced that, from now on, its objective will be the “liberation” of the largely Russian-speaking Donbass region of eastern Ukraine.

Deputy Chief of Staff of the Russian Armed Forces Sergei Rudskoy claimed that the order was given considering that “the main objectives of the first phase of the operation have been achieved” and that “the combat capability of Ukrainian forces has been significantly reduced”. “.

A part of Donbass has been under the control of pro-Russian separatists since 2014.

The deployment of portable anti-tank missiles and other Western weaponry to Ukraine has helped Ukrainian forces hold back the Russian advance and even allow Ukrainian forces to attack in some regions.

Russian troops tried for several days to encircle Kiev, but the counterattacks “would allow Ukraine to recover villages and defensive positions within a 35 km radius” of the capital, a report from the British Defense Ministry detailed.

After more than a month of war, thousands of Ukrainians died, including 121 children, and more than 4,300 houses were destroyed, according to a latest report released by Ukrainian President Volodymyr Zelensky.

Ten million people had to abandon their homes, of which more than 3.5 million fled abroad, according to UN data.

Pope Francis on Friday condemned the “hateful war” against “our defenseless brothers”, after denouncing the “massacre” in a country where “rivers of tears and blood flow”.

Negotiations to end the war continue without showing significant results.

Russia assured that talks with Ukraine do not advance on the main issues and said that the Kiev government is mainly concerned with “obtaining security guarantees from third powers” if “it fails to join NATO”.

“We insist, first of all, on obtaining a ceasefire and guarantees for the security and territorial integrity of Ukraine,” he declared.

Putin has enacted a new law that punishes anyone who spreads “false information” about Russia’s actions abroad with up to 15 years in prison.

Biden warned on Thursday, after attending a NATO summit in Brussels, that the Transatlantic Alliance would “respond” if Putin ordered the use of chemical weapons in Ukraine.

The Kremlin accused the United States of developing a chemical and biological weapons program in Ukraine and on Friday said Biden’s remarks were intended to “deflect the focus” from the issue.

Ukraine insists on the need to “increase economic pressure” against Russia and Moscow’s ally Belarus.

The 27 EU members have agreed to joint purchases of gas for the bloc, with the aim of containing the rise in prices fueled by the war in Ukraine.