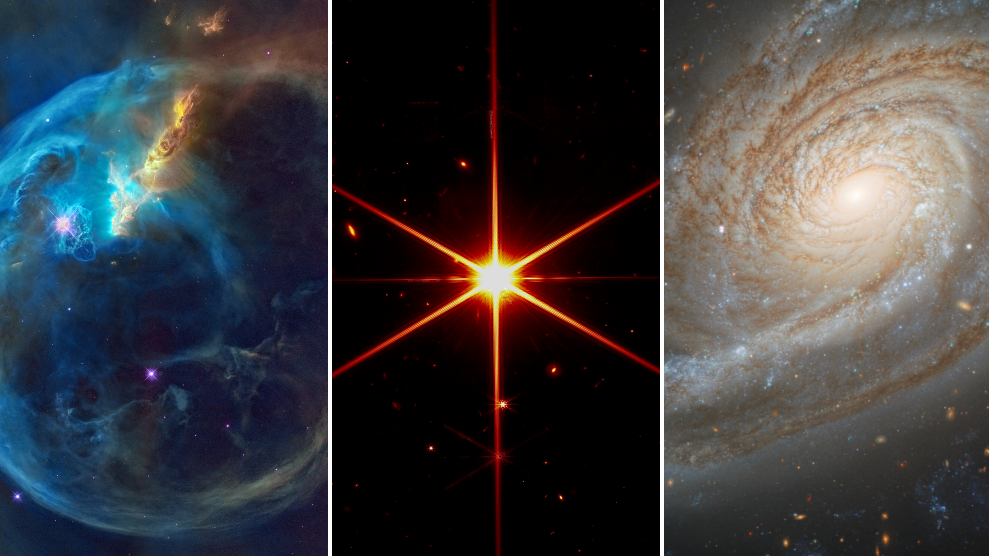 Another Saturday arrived, accompanied by another compilation of astronomical images gathered by NASA on the website Astronomy Picture of the Day. Here, you’ll find a fascinating image of a star photographed by the James Webb telescope, after an important step in aligning its mirrors has been completed — even the observatory staff were surprised by the photo!

In addition, this week’s selection of images brought up a peculiar-looking galaxy, which was left with one of its arms distorted after gravitational interactions with a neighbor. Photos of phenomena on Earth could not be left out and, this time, we have a record of a beautiful aurora that occurred after a coronal mass ejection, along with a composition of millions of images produced last year.

This is the star 2MASS J17554042+6551277, photographed by the James Webb Space Telescope after the end of a critical step in the process of aligning its mirrors. After aligning the segments of the new observatory’s primary mirror to form a single, continuous surface, the team focused it on the star. Thus, the record was produced as a test, to verify the result of the procedure.

Despite being the “star” of the photo — pardon the pun —, note that 2MASS J17554042+6551277 did not appear alone in the image; beyond it, there are several bright galaxies, which were also photographed thanks to the very high sensitivity of the telescope’s instruments. James Webb recorded the photo at a wavelength of 2 microns, within the infrared portion of the electromagnetic spectrum; red coloring was added to improve contrast.

The “spiky” structures in the star come from the telescope’s primary mirror: together, the 18 hexagonal segments print a faint diffraction pattern, which causes bright stars to be segmented, like snowflakes — and, according to the James team. Webb, the fact that the “tips” of the star appeared so clearly shows that the mirrors were perfectly aligned.

Sunday (20) — Sunset during the equinox

In 2015, during the March equinox, the photographer recorded the sun setting in a westward direction — and, despite the fact that the photo was taken in the United States, it would be possible to see the sunset in the west almost anywhere on the planet (the exceptions are the pole regions). Because, thanks to the tilt of the Earth, twice a year the Sun rises in the east and sets in the west; in this, the two hemispheres of the planet receive almost the same amount of sunlight.

This is where the name of the phenomenon comes from: the word “equinox” is formed by the terms “aequus” and “nox” which, in Latin, mean “equal” and “night”, respectively. For our ancestors, day and night even seemed to have the same duration during the equinox, but today it is known that this is not the case: in fact, there are small variations and the day is even a little longer than the night — so much so that, at mid-latitudes, there are about 8 minutes more light.

As the Earth’s inclination of 23.5º is responsible for the seasons, the equinox indicates that our planet has reached the point in its orbit where its axis is not inclined with respect to the Sun. Thus, the southern hemisphere begins the autumn days, followed by winter, while the northern hemisphere begins spring and then summer.

Last year, a camera installed in a city in the Netherlands took complete pictures of the sky daily, every 15 minutes. The image above brings these photos together into a single keogram, a type of visualization created by scientists to observe the aurora borealis through images that captured the entire sky. The advantage of using them is that they allow you to represent the changes that took place over the course of a day, through a fixed camera.

Made up of over 2 million images, this keogram shows January at the top and December at the bottom. The areas with lighter bluish color represent the periods of the day, while the central region, darker, is formed by photos taken during the night – when observing this area, you will notice some light bands on the diagonal, which represent the brightness of the Moon crossing the night sky.

The central part of the keogram, where the dark band narrows, indicates the summer solstice, marked by longer days; in parallel, the darkest parts of the strip signal the winter solstice. Already some areas became clear due to overcast skies in the Netherlands. Finally, the equinox occurring in early 2021 also appears here; to find it, look at the top of the image.

The month of March began with solar activity: at the beginning of the month, our star released a large coronal mass ejection (CME). These are large gas bubbles expelled by the Sun over the course of a few hours, which shoot clouds of protons, electrons and ions towards Earth. As part of them travel through the Solar System, some encounter our planet’s magnetic field and produce spectacular aurora borealis, like the one in this photo.

Auroras occur because when ions interact with the magnetosphere (the region around the Earth dominated by the magnetic field), part of them is trapped in the ionosphere, the name given to the upper part of the Earth’s atmosphere marked by ionization. There, the ions collide with different atoms, such as nitrogen and oxygen, and the energy of the encounter is released in the form of the colored lights we see.

As auroras need solar activity to happen, it is possible that other intense phenomena, such as the one responsible for the photographed aurora, continue to happen depending on the moment the Sun is. Our star goes through cycles of 11 years formed by the solar minimum and maximum, periods of lower and higher activity, respectively. Currently, the Sun is on track to initiate solar maximum.

This nebula may even have a shape that resembles that of a colorful and delicate cosmic bubble, but make no mistake: inside, there is evidence of violent processes. Above the center of the nebula, to the left, is an O-type star. In addition to being 45 times more massive than the Sun, it is hot and a few hundred thousand times brighter than our star.

The star’s gas is so heated that it escapes into space via the stellar wind, moving at millions of kilometers per hour; in this, the gas meets the cooler interstellar gas ahead, forming the outer part of the bubble. On its surface, the gas expands outwards and encounters cold regions of gas on only one side of the bubble, which makes the star appear to be off-center.

The Bubble Nebula measures approximately 7 light-years across and lies in the constellation Cassiopeia, 7,100 light-years from Earth. It was discovered in 17897 by astronomer William Herschel, and appears here in a composite and later reprocessed image produced from data collected by the Hubble Space Telescope.

About 100 million light-years away, beyond the stars and nebulae of the Milky Way, is the galaxy Arp 78. Also cataloged as “NGC 772”, this galaxy draws attention for one of the arms of its spiral, which stands out for be more prominent — notice that it appears to extend toward the left in this image, produced by the Gemini North telescope in Hawaii.

Due to its unusual appearance, the galaxy NGC 772 appeared in the Atlas of Peculiar Galaxies, which brings together some of the most curious and unusual galaxies in the universe, carefully chosen by astronomer Halton Arp. The atlas contains 338 galaxies of different shapes, selected and gathered there for astronomers to have access to a material composed of some of the most peculiar structures of these objects.

The glowing gaseous filaments of this nebula already give us an idea of ​​its popular name. Cataloged as “Abell 21”, the Medusa Nebula is an ancient planetary nebula about 1,500 light-years from us, in the constellation Gemini, the Twins. And just as with the mythological figure that inspired its popular name, this object too underwent a dramatic transformation.

The planetary nebula is the final step in the evolution of low-mass stars like the Sun. When they consume all the hydrogen in their core, these stars expand their layers and become red giants. In this, most of the outer layers are expelled, leaving behind only a core that will become a white dwarf. This core releases fast winds that push the expelled atmosphere and thus form planetary nebulae.

Note that, in the end, the term “planetary nebula” has nothing to do with planets. This expression was coined by astronomer William Herschel, who identified these objects shortly after discovering the planet Uranus. Upon observing a greenish mist enveloping them, he found them similar to the planet, and ended up defining the name that is used to this day.

Raju has an exquisite taste. For him, video games are more than entertainment and he likes to discuss forms and art.
Previous Zelensky accuses Russia of fueling arms race
Next US to propose tightening sanctions against North Korea at UN