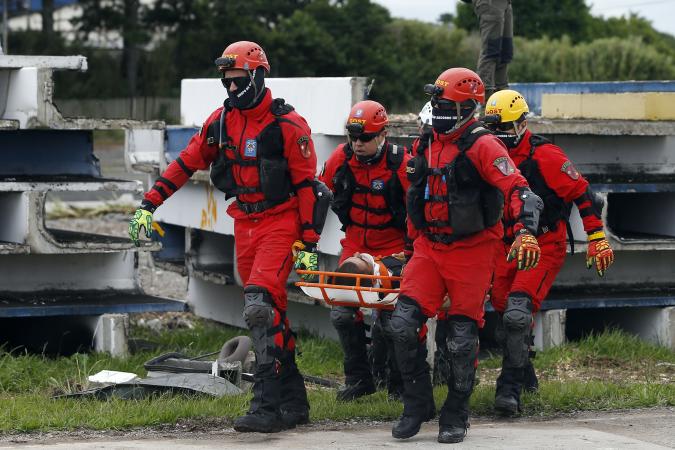 Jenni Smith March 27, 2022 Health Comments Off on Simulation of scene ends training of the National Force of SUS in Paraná 18 Views

More than 230 professionals from the Fire Department, the Mobile Emergency Care Service (Samu), the Civil and Military Police, the Municipal Guard and Civil Defense of Paraná, in addition to the SUS National Force, had a morning of challenges this Friday. (25), in the municipality of Pinhais, Metropolitan Region of Curitiba. They participated in a realistic simulation of a building collapse involving multiple victims. The “building collapse” took place at the former Pinhais race track, located in the Metropolitan Region of Curitiba, which is being demolished, and served as a scenario for the simulation of the urgency and emergency forces of Paraná.

The site became a large open-air laboratory with ambulances, vehicles from the Fire Department, from traffic control, from the Legal Medical Institute (IML), in addition to two rescue helicopters and with the participation of people who acted as victims in the test. . The experience is part of the training that the National Force of the Unified Health System (SUS), in partnership with the State Department of Health (Sesa) conducts in Paraná. The “Multiple Victim Incident (MIV)” course aims to strengthen the preparation of state and municipal teams to act in cases of public calamity, such as natural disasters, mass events, or in serious emergency situations involving several victims.

“Since November 2021, we have been aligning this meeting and working together with the service forces. The speed and greater qualification of these professionals can save more victims in catastrophes and serious incidents. We do not want or expect serious accidents to happen in Paraná, but we have to be prepared”, highlighted the Secretary of State for Health, Beto Preto.

COURSE – Specialist instructors of the National Force of SUS, with the participation of the Fire Department, Civil Defense and Sesa, are since Wednesday (23) passing on content and experiences to about 230 participants of this training. It is the first time that the team from the Ministry of Health carries out the course in Paraná, which ended this Friday (25).

“We started training with theory, tabletop and realistic simulations, in addition to debates. Every State force was activated for this integrated action. We intend to create the state force and we are aligning this with the states, to be an arm of the Federal Government in this area”, said the coordinator of the National Force of SUS, Colonel Moura Filho.

SCENERY – At the beginning of the realistic simulation, there was a bomb explosion that left the place as if a building had collapsed. Volunteers who participated in the action simulated being injured and trapped in the rubble. From there, the rescue and first aid scene unfolded. The activation of ambulances, the arrival of firefighters, and other rescue teams was done in real time, as well as the arrival of the two helicopters involved in the action. Sniffer dogs, people who disturbed the place or were family members, the press, all this was part of the scenario. The intention was to make the scene closer to reality.

FN-SUS – Created in 2011, it is responsible for measures to prevent, assist and control epidemiological situations, natural disasters or situations of lack of assistance to the population, when the possibility of response is exhausted or support to the state or municipality is needed. Over these years, the Force has acted in more than 53 missions with 500 volunteers, as in facing the most critical moment of the Covid-19 pandemic in Manaus and in other states.

She's our PC girl, so anything is up to her. She is also responsible for the videos of Play Crazy Game, as well as giving a leg in the news.
Previous Joe Biden criticizes Vladimir Putin in speech in Poland: ‘For God’s sake, this man cannot remain in power’ | Ukraine and Russia
Next At least 300 died in Russian attack on theater in Mariupol