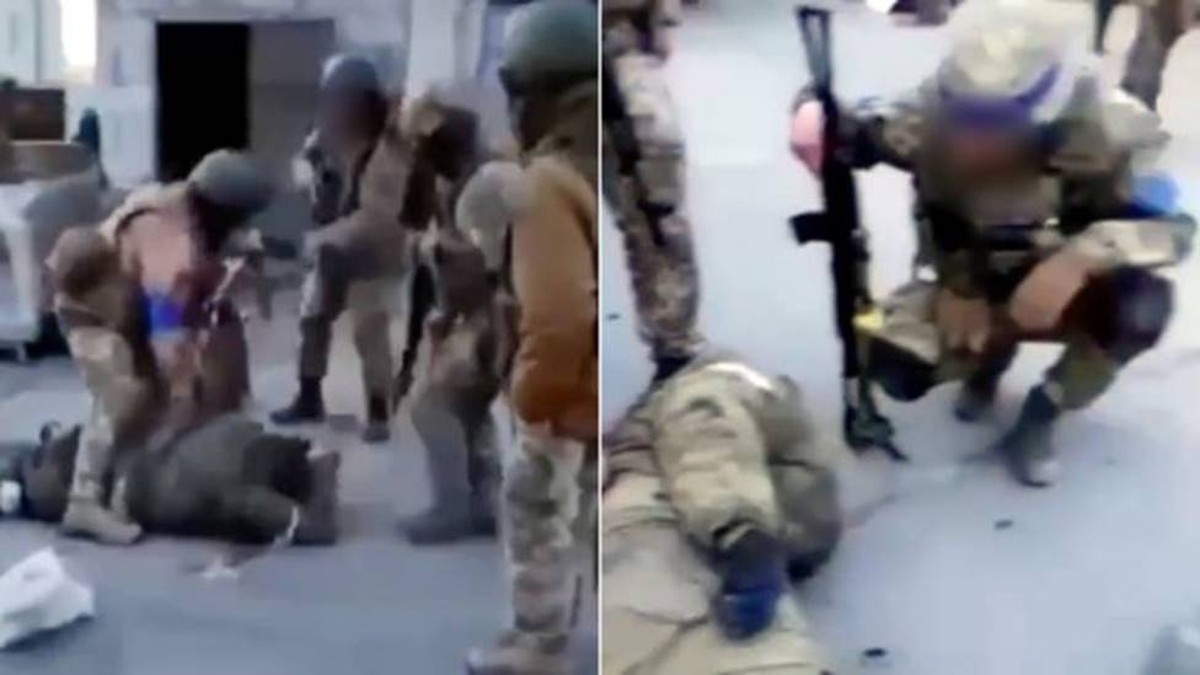 War in Ukraine: What is known about video showing alleged Russian prisoners shot | Ukraine and Russia

The low-res video is making the rounds on social media after first appearing on Sunday (3/27). The video has since been widely reposted by pro-Russian accounts on various platforms.

The commander-in-chief of the Ukrainian armed forces, Valerii Zaluzhnyi, said Russia is “filming and distributing staged videos” to lie about Ukraine’s treatment of Russian prisoners.

However, Oleksiy Arestovych, an adviser to Ukrainian President Volodymyr Zelensky, said there would be an immediate investigation into the video.

“I would like to remind all of our military, civilian and defense forces that abusing prisoners is a war crime,” said Arestovych.

The BBC is reviewing the video but has not yet been able to independently verify its authenticity. Check out what we’ve discovered so far below.

The footage — which is too violent to be released in full — shows what appears to be several captured Russian soldiers, all lying on the ground. Some have bags over their heads and many appear to be bleeding from wounds on their legs. It is unclear how or when they were injured.

Prisoners are interrogated about their units and activities in the area. At one point, three men are pulled out of a vehicle and apparently shot in the legs by a soldier at gunpoint.

Then these men are interrogated.

Where was the video filmed?

On Sunday night, a Twitter user suggested the video was filmed at a dairy in Malaya Rohan, southeast of Kharkiv. The BBC used geolocation tools to try to confirm the information. The area had recently been retaken by Ukrainian troops.

By analyzing satellite images and photos of the farm, we can identify clues about the location of the video.

Before the three alleged soldiers are shot, we can recognize elements of a house behind one of them. A tree (1), a chimney (2) and the top half of a window (3) are very similar to an earlier image (from 2017) of the dairy’s surroundings that we found on the farm’s Google page.

In the video, the house that appears is partially covered by a white structure in the backyard.

In another section of the video, with soldiers lying in the foreground, there are more visual clues.

The white structure (4) and the chimneys (1), the trees and the black wall (2) are all present in the main space of the farm.

When was the video filmed?

Video footage is not timestamped and there is no metadata to determine exactly when it was filmed. You can see a clear sky and dry ground.

Weather reports from the Kharkiv area suggest the video could have been filmed on Saturday (26/3). The weather on Friday and Saturday was dry, sunny and cold. On the night between Saturday and Sunday, there was light rain in the region.

From the position of the sun, it is believed that the footage could have been taken in the early hours of the day.

What is being said in the video?

Prisoners are being interrogated in Russian. A BBC Monitoring language expert says the interrogators’ accents “are in line with what you would expect from Russian-speaking Ukrainians”.

Another expert confirmed that they appear to have Eastern Ukrainian accents, pointing to the use of “hovorit” (“speak”) instead of Russian “govorit”.

At one point, one of the prisoners is accused of bombing Kharkiv. Another is asked about his nationality and responds that he is Azerbaijani, not ethnically Russian.

One of the prisoners says he is based in Biskvitne, which is close to the village of Malaya Rohan and the dairy we identified.

The accents of the men controlling the situation seem to be from the east of the country. This, however, does not confirm that they are Ukrainian soldiers — it is still possible that they could be pro-Russian separatists from this region.

They are wearing blue armband uniforms worn by Ukrainian forces, although again this is not conclusive.

There are no regimental badges or other forms of identification visible.

Ukrainian forces were in this region in those days.

Over the weekend of March 26-27, a video was posted online showing the activities of the Kraken unit, affiliated with the far-right political group National Corps. The BBC identified that the footage in this video was taken in the village of Vilkhivka, 5.6 km from Malaya Rohan. The climate is equally sunny and dry.

The group says 30 Russians were taken prisoner in the village on March 25. The Kraken video has footage of prisoners of war tied up, blindfolded, placed in a van and forced to sing the Ukrainian national anthem. But there is no shooting or violence against them.

Excerpt from the video that shows a soldier carrying a camouflaged weapon — Photo: BBC

In the video of the alleged shootings at the farm, one of the soldiers passes carrying a camouflaged rifle.

We asked Nick Reynolds, a military expert at the Royal United Services Institute (RUSI), to examine this excerpt.

“It looks similar to the way SOFs [forças especiais] Ukrainian women camouflage their rifles,” he told us, “but the weapon looks slightly different from any I’ve ever seen.”

He also recalls that both sides captured each other’s weapons, so it’s hard to be sure who appears in the videos.

In the most disturbing part of the video, three men appear to be shot in the legs at close range with a gun.

There has been controversy on social media over whether the footage is real or staged, with some people claiming there is not enough blood, signs of wounds from the bullet exit, or screams from victims.

We showed the video to several surgeons and former military doctors who gave us their expert opinion but preferred to remain anonymous.

One said he treated soldiers who suffered gunshot wounds who didn’t scream. He said the lack of bleeding in some of the wounded soldiers could be explained by their having a tourniquet (visible in the video).

He said: “In my opinion, the footage cannot simply be classified as ‘fake’ based on the footage seen. This requires a war crimes investigation.”

Another doctor said: “It looks genuine… it matches the description of shots to the limbs done as a form of punishment.”

Others on social media pointed to the rifle’s lack of apparent recoil when fired, claiming the weapon could have been firing blanks.

Reynolds points out that the AK-74’s 5.45mm ammunition is small caliber and has very little recoil, but also added that “the video quality is not great”.

The BBC is continuing its efforts to verify the authenticity of this video and will update this report if there is any news.