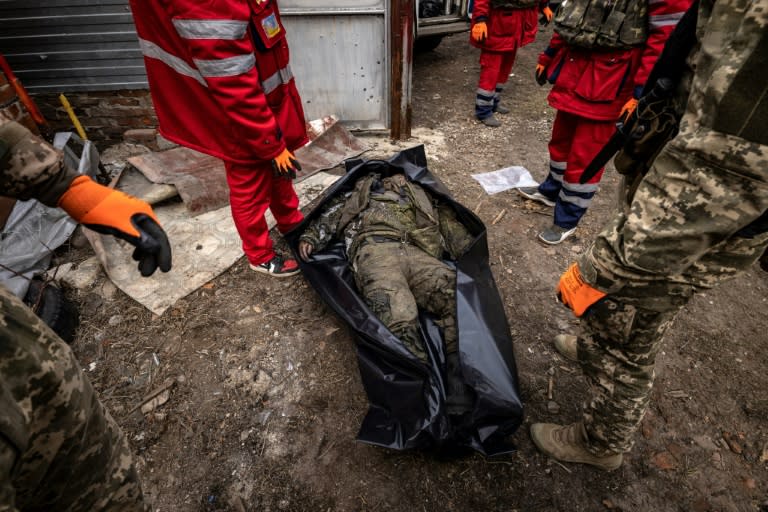 They appear here and there, caught by death, in their bloodied uniforms, haphazardly from a ditch or a door riddled with shrapnel. A dozen dead bodies of Russian soldiers were strewn across the eastern outskirts of Kharkiv on Wednesday.

The Ukrainian army regained control of a part of the highway, loosening the Russian siege on Ukraine’s second city.

“There are ones everywhere,” says a Ukrainian intelligence officer during an army-organized tour along this four-lane road and in the neighboring village of Mala Rogan, three kilometers further north.

The fighting “lasted almost three days to free” this stretch of road that connects Kharkiv to Chuguyv, he explained. East of Chuguiv, however, this same road is cut: the bridge over the river Donets was destroyed during the night by bombing, noted AFP.

Near Kharkiv, “the road was under fire from Russian forces who killed civilians. We pushed them back about ten kilometers further north,” says a commander of the 92nd Brigade, one of the main units involved in the city’s defense.

The body of a Ukrainian, in civilian clothes, killed a few days earlier, still lies on the side of the road, next to a bullet-riddled van.

In a ditch, below the side of the road, another corpse, that of a Russian soldier this time, with its fingers pointing to the sky.

On the edge of a plowed field a few hundred meters away, a Russian position was completely destroyed. Two armored personnel carriers, vaguely hidden behind a fence, their weapons aimed at Kharkiv, are half-charred amid abandoned military objects.

Here the soldiers were able to escape. But at the next fighting post, the corpses of five soldiers, heavy helmets on their heads, lie here and there, one at the bottom of their trench, the others on the ground.

Everywhere, in the fields, in the bush or on the nearby road, holes from grenades, remains of bombs or other deadly rockets, witnesses the intense bombing.

Russian soldiers “were exhausted”, especially “young people who were starving”. There were nearly 120 in this area, of which “forty” were taken prisoner, the intelligence official said.

How many died? No Ukrainian soldier ventures to give a precise number. The swing on the opposite side seems to leave them indifferent. An officer conjures up “dozens” of dead Russians.

What is certain is that Russian forces found themselves surrounded by surprise on this eastern part of the front around Kharkiv and, in particular, trapped in Mala Rogan, according to concurring sources.

The village was recaptured over the weekend, but clean-up operations took nearly three days, house by house, as many Russian soldiers took refuge in basements.

This Wednesday, an ambulance began to collect the bodies in plastic bags: one near a bus, another two at the entrance of a hovel that had been visibly used in recent weeks by soldiers.

One of them wore civilian clothes over khakis. “They had been there for weeks, dressed like the people here to better infiltrate our lines,” said a Ukrainian police officer.

Few civilians reappeared on the streets. A couple repairs a roof, damaged by a bomb that left a 10-meter-wide crater in the neighboring alley.

Old ladies, with flower scarves, collect oranges, cookies and other food distributed by the army. They evoke some thirty people held hostage by Russian soldiers on the first floor of the village school, including girls who “were raped”.

An old man, with a cap on his head, also complains. Three Russian soldiers raided his house for days. “Give me a rifle and I’ll kill a Russian!” he shouted.