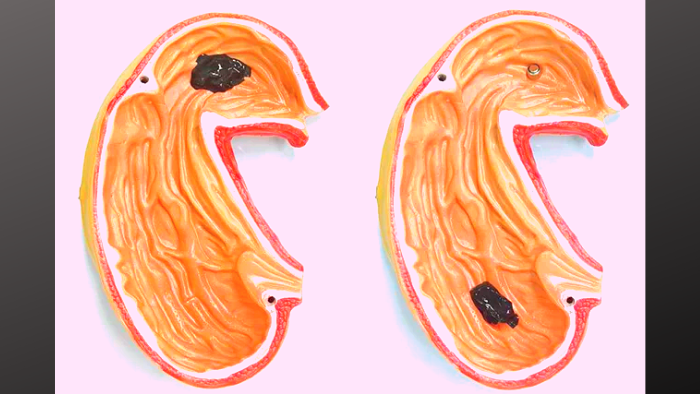 Researchers at the University of Hong Kong in China have developed a robot made from magnetic sludge that can be used to navigate the digestive system in search of accidentally swallowed objects. According to its creators, the bot was designed to sneak through narrow passages, as in the human intestine.

The robot is made by mixing a polymer called polyvinyl alcohol, borax — widely used in common detergents and cleaning products — a special type of resin and neodymium magnetic particles. These components give the bot viscoelastic properties, that is, sometimes it behaves like a solid and sometimes like a liquid.

“It’s like mixing water with cornstarch at home. The joining of the two produces a non-Newtonian fluid whose viscosity changes under force. When you touch it too quickly, it hardens. However, when touched gently, it liquefies, facilitating its passage through tight spaces”, explains Professor Li Zhang, co-author of the study.

On social media, the dark-colored magnetic blob has earned the nickname “magnetic poop” — for obvious reasons — as well as being compared to a sticky, green substance that appeared in the sci-fi movie. flubber1997, starring Robin Williams.

Despite the jokes, its inventors guarantee that the magnetic sludge device can be used in medical applications in the real world, being very useful in incursions into the digestive system and in reducing damage caused by ingesting small objects such as coins, batteries and other materials. metallic.

“To prevent leakage of toxic electrolytes present in a battery, for example, maybe we could use this type of magnetic sludge robot to encapsulate it, forming some coating between the object and the intestinal wall,” adds Zhang.

As the magnetic particles present in the robot are very toxic, the researchers coated the outside of the sludge with a layer of silica to form a protective film, ensuring that the bot safely navigates the bowels of the human body.

According to the scientists, it is also possible to add pigments or dyes to the robot so that, instead of brown, it becomes more colorful, facilitating its identification in the organism and reducing comparisons with the waste found in the places where the magnetic bot operates.

“The ultimate goal is to deploy it as a robot, easy to handle and easy to see. As we are still trying to understand the properties of this material, we need to make it as safe as possible, predicting its permanence in the human body gradually”, concludes Professor Li Zhang.

Raju has an exquisite taste. For him, video games are more than entertainment and he likes to discuss forms and art.
Previous ‘They didn’t say a word, they just shot with a machine gun’, says woman shot by Russian army
Next At the hospital, Viih Tube talks about Rodrigo Mussi’s health condition: “It’s really serious”; Tiago Abravanel is seen crying at the entrance