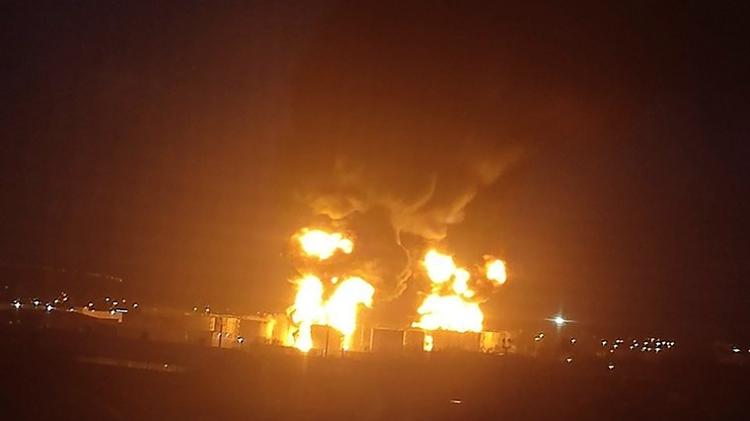 The attack on an oil deposit in Belgorod, a Russian city about 40 kilometers from the border with Ukraine, marks the 37th day of the war and could complicate talks between the countries, as indicated by statements by the Russian government. According to Vyacheslav Gladkov, governor of the region, “the fire in the oil deposit occurred as a result of an air strike by two helicopters of the Armed Forces of Ukraine, which entered the territory of Russia at low altitude.”

A spokesman for Ukraine’s Defense Ministry, Oleksandr Motuzianyk did not confirm or deny whether the country was involved in the attack recorded in Russia. According to him, the Ukrainian government “is carrying out a defense operation to repel Russian armed aggression”. “And that doesn’t mean that Ukraine should be responsible for every miscalculation and every disaster, and every event that takes place on Russia’s territory,” he said. “Therefore, I will not confirm or refute this information. [sobre envolvimento da Ucrânia no ataque].”

The attack on a Russian city comes on the day the two countries resume talks on the conflict. The delegations from Ukraine and Russia are talking virtually.

Russian government spokesman Dmitry Peskov said today that “the fire at the oil deposit in Belgorod does not create comfortable conditions for the continuation of negotiations between Russia and Ukraine”. According to him, Russian President Vladimir Putin had already been informed of the situation. Peskov also denied that the 134,000 recruits recruited by Russia will be used in the conflict with Ukraine.

This Friday (1st), there was also a visit to Kiev by the President of the European Parliament, Roberta Metsola. She is the first high-ranking representative of a European institution to travel to Ukraine since the Russian invasion began on February 24. According to Ukrainian Prime Minister Denys Shmyhal, “support for Ukraine’s European integration aspirations and strengthening of sanctions against Russia were discussed.”

The Russian city of Belgorod is about 80 kilometers from Kharkiv, Ukraine’s second largest city, which, since the beginning of the Russian invasion, has been the target of constant attacks.

A team of about 170 people was sent to the oil depot site to put out the flames, according to Gladkov. He also said that there will be no fuel distribution problems in the region. “The situation is stable. There has never been a lack of fuel, there never will be.”

The Rosneft group, which owns the warehouse, announced that it had evacuated workers from the site.

Russian soldiers occupying the Chernobyl nuclear power plant left the facility but took representatives of the National Guard, who had been captured on Feb. 24, reported Energoatom, Ukraine’s state-owned nuclear company.

The IAEA (International Atomic Energy Agency) received a report from the Ukrainian government that on Thursday night (31) there were no unauthorized persons at the site of the Chornobyl nuclear power plant. The agency said it was preparing to send a mission to the radioactive waste facility.

Despite Russian soldiers taking control of Chernobyl shortly after the February 24 invasion of Ukraine, Ukrainian officials at the plant continued to oversee the safe storage of spent nuclear fuel and concrete-encased remains from the reactor that exploded in 1986, causing the worst nuclear accident in history.

Ukraine’s Defense Ministry says it is continuing the “partial withdrawal of units of Russian occupation forces from the north of the Kiev region” towards the border with Belarus.

According to the report, “the convoys also include civilian vehicles — trucks, buses, minibuses, cars — that were stolen by Russian invaders during the temporary occupation of the territories.” “In addition, the enemy performs the removal of looted goods.”

For NATO Secretary General Jens Stoltenberg, however, Russian forces are not withdrawing, but regrouping.

Despite the apparent Russian withdrawal, the Kiev region administration has already announced that there will be a curfew from tonight until tomorrow (from 15:00 today to 00:00 GMT).

The Russian Defense Ministry highlighted in its report today that it continues to attack Ukraine’s military installations and defense equipment, including in the Chernihiv region in the north of the country, where the Russian government had indicated it would reduce military activity.

Chernihiv Governor Vyacheslav Chaus said today that “the enemy, thanks to our Armed Forces, is leaving the region”. “But only he knows why he’s doing this. But I hope he leaves here for good. Even if he goes, to regroup and come back, let’s wait for him with a double ‘welcome’.”

For Chaus, however, there is still a risk of “possible air and missile attacks in the region”. “The enemy can act anyway. They fly at us and shoot,” he said, urging the population to go to shelters when sirens go off. “It’s too early to relax. We still have a lot of work to do and we still have a war. The enemy is in our land, in Chernihiv, Ukraine.”

Ukraine’s president sacked two senior government officials for “treason”. According to Zelensky, “those who break the oath of allegiance to the Ukrainian people will inevitably be deprived of their military degrees.”

Local media said the two fired would be high-ranking members of the national security service and would be passing sensitive information to Russia.

“If this is confirmed, assaulting and shooting the legs of captured combatants would constitute a war crime,” HRW said in a statement released on Thursday night. “Ukraine must demonstrate that it is capable and willing to prevent and punish serious violations of international humanitarian law,” added HRW.

In a commentary on the Telegram app, an adviser to the Ukrainian Presidency, Oleksiy Arestovich, acknowledged that abuses against prisoners constitute a “war crime” and that such acts must be “punished”. Russian soldiers are also accused of abuse since the beginning of the invasion of Ukraine.