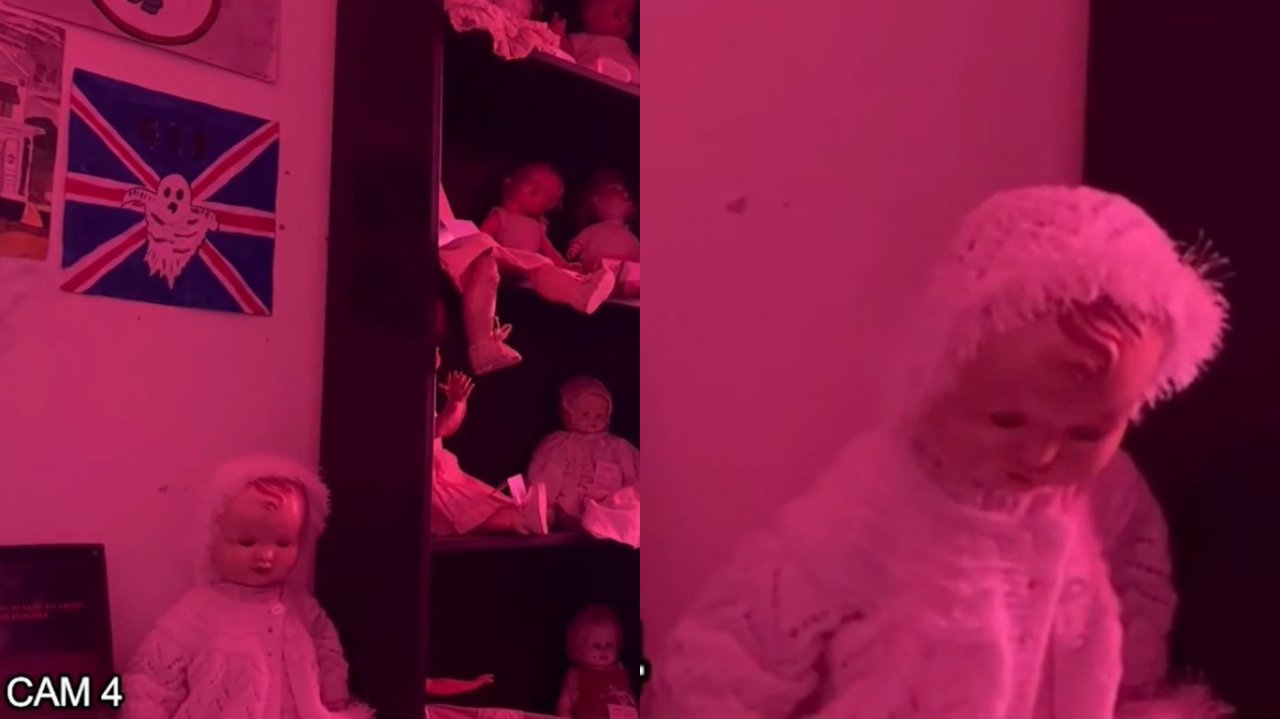 “Haunted” doll is caught moving by itself and scares owners: “As if it were human”; watch

Abhishek Pratap April 2, 2022 News Comments Off on “Haunted” doll is caught moving by itself and scares owners: “As if it were human”; watch 17 Views

A couple from Rotherham, England, were in shock recently when they caught a doll moving by itself through security cameras. According to Metro, Lee and Linzi Steer collect scary toys, but this one in question was given to them without any explanation. On social media, the video yielded supernatural guesses.

The two are paranormal hunters. Still, they were surprised to find that the doll had mysteriously shifted position in their museum of haunted objects. “We went there on Friday and we both noticed the doll had leaned forward. I said, ‘Let’s check the cameras.’ Nobody ever goes in there. Only me, Lee and his mom have the keys. We had to get the cameras back until Tuesday, when Lee was like, ‘Oh my God’.”described Linzi.

The scene they saw next left them stunned. “The doll moves forward in three stages and then its head moves. She turns her head. It’s as if the joints are not moving like a human’s. It was supported like that. If it had been a natural fall, she would have fallen to the ground, but she didn’t. The way she was positioned defies gravity. In fact, this doll is heavy and was tilted at that angle. This footage is the first time we’ve captured something moving on the museum’s camera. It makes me confused. I’m in disbelief but I can’t explain it”added Linzi.

Watch the video below:

Lee said that in 20 years as a “ghost hunter”, he had never seen anything like it. The couple released the video on the web and many fans of paranormal activities suggested it would be the presence of a child’s spirit. “We put this online and 99 percent said it looked like a childlike spirit wanted to hug the doll. Many of the people who come to the museum pick up their children there. It’s very weird. If there is something stuck in the doll, we want to work on it.”said Linzi.

The Mystery of the Doll in the Museum

Lee and Linzi open their museum to private parties or paranormal investigators. They claim to have ‘five of the ten most haunted items that ever lived’ on display. “Every week there’s someone investigating there. This museum has haunted items that people send us from all over the world, and the house itself is very haunted. We go over there to make sure the house is okay, after some crew comes in.”said Linzi.

“We have 11 rooms of different things. [A propriedade] It used to be three miners’ houses, but now it’s our museum, a cafe and a little shop.”, described. For them, the assumption about the spirit of a child with the doll has to do with the stories of the property’s past. “The details recorded are that there were two very neglected children there. There is documentation of another child who was burned and reprimanded to death.”she said.

So far, what still has no explanation is the appearance – out of nowhere – of the haunted doll there. “This particular doll did not come to us as haunted. People sent us but didn’t tell us particularly [o que aconteceu com ela]. Usually they leave us notes, but this doll had nothing. It was a mystery”commented Linzi.

And this mystery decided to show its faces, huh? It breaks, sir!

Food maven. Unapologetic travel fanatic. MCU's fan. Infuriatingly humble creator. Award-winning pop culture ninja.
Previous “Haunted” doll is caught moving by itself and scares owners: “As if it were human”; watch
Next ‘Nazi grandmother’ who denies the Holocaust is sentenced to 1 year in prison in Germany | World