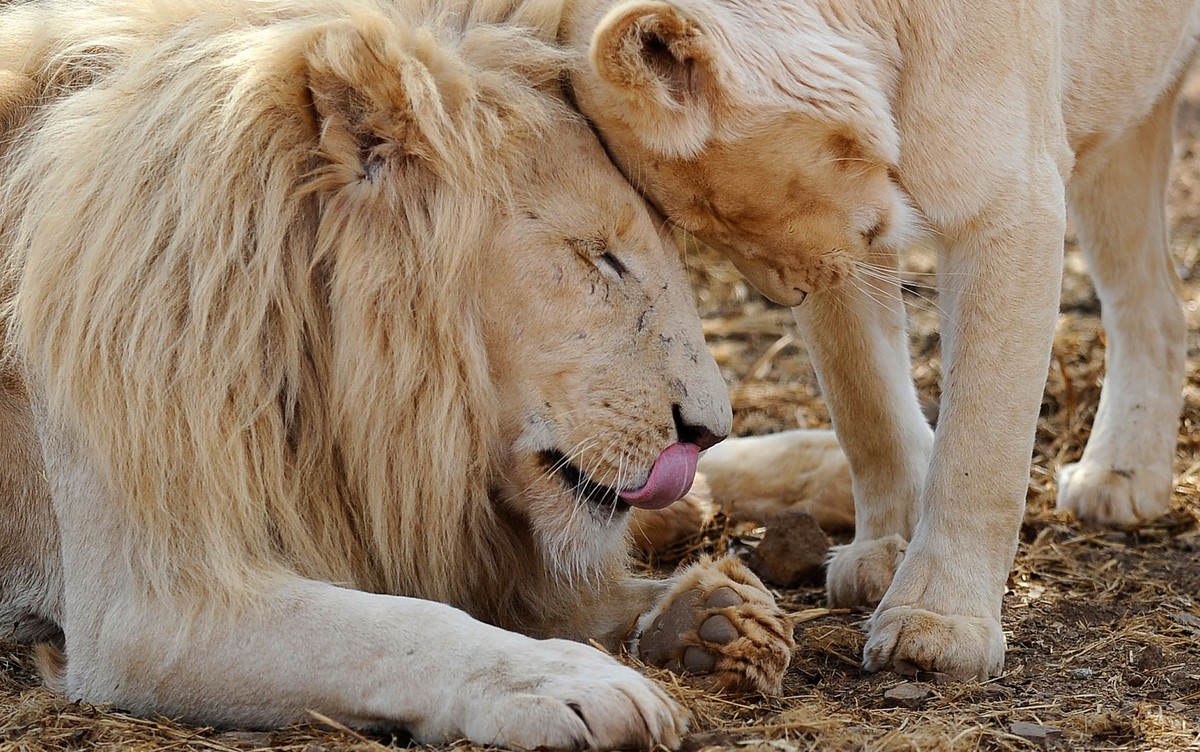 Oxytocin, the ‘love hormone’, encourages social bonds and helps in the conservation of ferocious lions | Look how nice it is

Abhishek Pratap April 2, 2022 News Comments Off on Oxytocin, the ‘love hormone’, encourages social bonds and helps in the conservation of ferocious lions | Look how nice it is 10 Views

Scientists who spent years spraying oxytocin into lions’ noses found that the big cats became much friendlier to their neighbors and less likely to roar at strangers when given the so-called “love hormone.”

The results, published in the journal iScience on Wednesday (30), could significantly contribute to conservation efforts, as urban sprawl forces more specimens to live together on reservations.

“I’ve always liked lions,” neuroscientist and lead author Jessica Burkhart told AFP, explaining that she got involved in the research because she got tired of examining the animals’ brains in the laboratory and wanted to study them in real life.

Cats in general have a reputation for being independent, but lions, on the other hand, live socially in packs while conquering and defending valuable territory in the African savannah.

“If you think about male lions, for example, they’ll leave the pride when they’re a few years old and come across other male lions that they don’t know and are not related to, and they’ll bond for life,” Burkhart said. .

These types of behaviors indicated that lions, unlike solitary cheetahs or leopards, are biologically programmed to be social in some situations, making them an interesting species to study the effect of oxytocin.

In mammals, oxytocin is the main molecule that strengthens social bonds. Sometimes called the cuddling hormone, it is produced in the mother’s brain when she looks into the newborn’s eyes, generating feelings of well-being and happiness as she helps the baby reach for her breast to suckle.

Similar effects have been documented in other species and also between dogs and their owners. Therapists even suggest that troubled couples may benefit from increased eye contact, which releases oxytocin.

Working at a wildlife reserve in Dinokeng, South Africa, in the summers of 2018 and 2019, Burkhart and colleagues at the University of Minnesota performed a test using chunks of raw meat to lure lions to a fence.

The hormone was sprayed into the cats’ noses using an instrument similar to an old perfume bottle, so that it traveled directly to the brain. After treatment, the 23 lions who received oxytocin became more tolerant of the other lions in their space.

This was measured by looking at how close a lion that is in possession of a desired object, in this case a toy, allows others to approach it.

“After the lions were treated with oxytocin and we gave them their favorite toy, we saw that the average distance between them decreased from about seven meters without treatment to about 3.5 meters after we gave them oxytocin,” Burkhart said.

The lions also did not respond when recorded roars of unknown intruders were played, unlike those in the control group who were either sprayed with nothing or sprayed with saline.

Reducing hostility toward strangers was an especially encouraging finding, Burkhart said, because oxytocin is known to have a dark side in humans: while it promotes positive feelings among members of a group, it can increase rivalry with strangers.

Treatment can be helpful in a variety of settings, the neuroscientist explained. First, it could help lions rescued from abusive situations, such as circuses or zoos in war zones, to coexist in sanctuaries.

Second, as cities in Africa expand and encroach on lion territory, conservationists are forced to transport the animals to private reserves where unfamiliar prides are housed, and oxytocin can help prevent conflict.

It can also help relocations in the wild, helping lions become “more apt to their new social environment by being more curious and less fearful, leading to more successful bonding,” Burkhart said.

One fear is that unscrupulous people like the infamous Joe Exotic of the “Tiger Mafia” could use the chemical to run zoos that promote cub hugging, much criticized by animal welfare advocates.

“The truth is, people are corrupt … but I hope this case will help more than hurt,” Burkhart said.