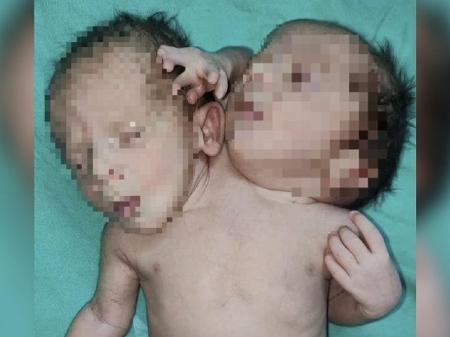 Twins are born with the same torso, three arms and two hearts in India

Abhishek Pratap April 2, 2022 News Comments Off on Twins are born with the same torso, three arms and two hearts in India 15 Views

SÃO PAULO, SP (UOL/ FOLHAPRESS) – Indian doctors recorded the birth of conjoined twins joined by the same torso at a hospital in the state of Madhya Pradesh. Together, the two have three arms, two hearts, and two heads.

The babies were born last Monday (28) in the city of Ratlam and the parents had been told they would be twins, but were not aware that they were Siamese.

After noticing the children’s condition, the doctors sent them to Maharaja Yeshwantrao Hospital, in the city of Indore, with a better structure to receive them.

The mother remains in the Ratlam hospital where she gave birth.

In an interview with the Indian newspaper Free Press Journal, the surgeon said that this is a rare case of dicephalic parapagus twins, as it is called when babies are born with their heads side by side on the same trunk. “Cases like this are rare and we still don’t know the exact situation of the babies, especially in these first days when they are under observation. We have not planned any surgery as of yet,” he said.

According to the Journal of Pediriatic Surgery, the birth of conjoined twins occurs in one in every 100,000 births worldwide. Cases in which they are born united at the torso, such as that of Indian children, occur in one in a million.