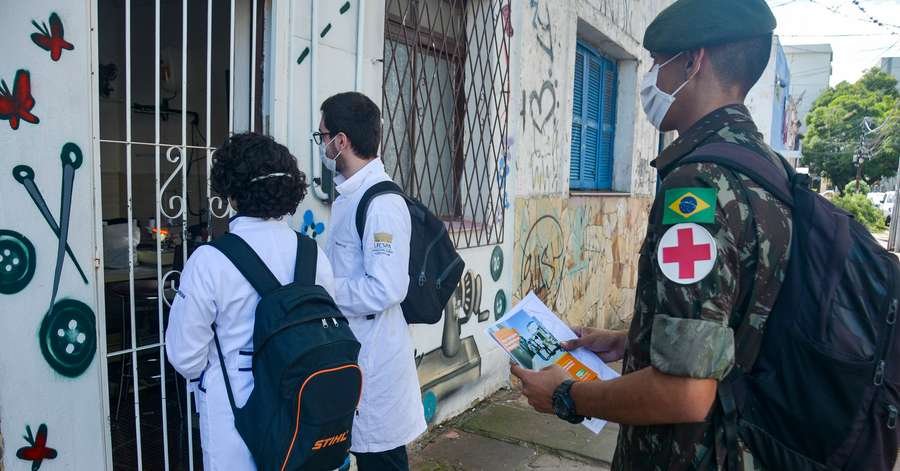 To prevent the spread of the mosquito that transmits dengue, Aedes aegypti, health teams intensified education actions and visits to homes in 31 neighborhoods of the Capital to alert residents about the importance of reviewing patios and buildings and avoiding places with standing water. The activity carried out on Saturday, which marks D-Day against Dengue, took place in regions that recorded confirmed or suspected cases.

Divided into groups, 56 people started the activities of orientation and inspection of houses and buildings in the morning. On Joaquim Nabuco Street, in Cidade Baixa, a trio formed by Alisson Santana da Luz, Sofia de Lima Silva and army soldier Luis Felipe Portal Soares approached the residents of the neighborhood. It was the first time the group participated in an action. “The resident is already aware and already knows a lot. Of the residences that we approached, none of them had a focus”, explains Soares.

The receptivity of the residents is praised by the trio. “Whoever answers the door is very receptive, they understand. We ask if there is any place that can have accumulated water and they answer with sincerity”, says Sofia. “They let us check. It’s been very quiet, the staff attends us in pajamas, lying on the couch, but they are very calm”, she adds. Luz emphasizes the importance of actions to contain the spread of the disease vector. “I’m finding it very interesting to learn more, understand more and also the importance of our actions here”, she highlights.

Responsible for the teams that worked in the Independência, Floresta, Moinhos de Vento and Cidade Baixa neighborhoods, Anelise Breier – who is part of the Center for Strategic Information on Health Surveillance (CIEVS) – states that the choice of approach in the neighborhoods is due to records of dengue cases. Anelise says that Porto Alegre has more than 44 neighborhoods with dengue cases.

“It is a closer approach to the population for awareness and verification of outbreaks, for example, in common areas of condominiums, in patios of houses, outdoors, and an approach with employees and residents for the care that is necessary to prevent the spread of the disease. mosquito, which is the vector of the disease”, he warns. She notes that the places chosen for inspection and guidance took place on the blocks where neighbors of cases were notified and confirmed.

With a lively nightlife, Cidade Baixa demands special attention. “It is necessary to maintain hygiene and the collection of residues very carefully, because if this does not happen it is very easy to have outbreaks, because there are bottles and cans left in the environment. And nightlife places have a lot of that”, he maintains. The initiative brings together professionals from the Municipal Health Department (SMS), students from the Federal University of Health Sciences of Porto Alegre (UFCSPA), the Medical Union of Rio Grande do Sul (Simers) and the Southern Military Command (CMS).

She's our PC girl, so anything is up to her. She is also responsible for the videos of Play Crazy Game, as well as giving a leg in the news.
Previous This is how the new feature that will be released soon in the WhatsApp app will work – Metro World News Brasil
Next Ukraine: Russian Missiles Hit Odessa; trading should resume tomorrow – 04/03/2022