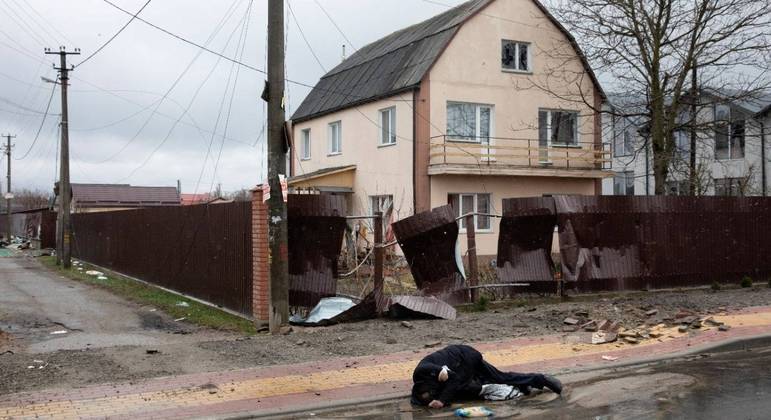 Authorities in Bucha, a small town northwest of Kiev, said they had to dig mass graves to bury the bodies, including some with their hands tied behind their backs, while images of dead bodies on the streets shocked the world more than a month after the invasion began. russian.


Russia has denied any responsibility and, on Monday, the Kremlin ‘categorically denies all accusations’.

Kremlin spokesman Dmitri Peskov said Russian Defense Ministry officials found signs of “fakes in the videos” and “fakes” in the footage presented by Ukrainian authorities as evidence of a massacre blamed on Russia.

But condemnation was swift, and Western leaders, NATO and the UN expressed horror at reports of civilians killed in Bucha and other areas of the Kiev region.

Zelensky was ruthless in his nightly video message, in which he claimed that “concentrated evil” has come to his land. He said that Russian soldiers only deserve death after what they did.

“I want every mother of every Russian soldier to see the bodies of people killed in Bucha, in Irpin, in Hostomel. I want all the leaders of the Russian Federation to see how their orders are carried out,” he added.

Zelensky also said he had created a special body to investigate the massacres in areas from which Russian forces had withdrawn in the capital region, after Moscow redirected the offensive towards southeastern Ukraine.

The scale of the massacres is still being investigated, but Ukrainian Attorney General Iryna Venediktova said 410 civilian bodies were recovered.

The mayor of Bucha, Anatoly Fedoruk, told AFP that 280 bodies were taken to mass graves because it is impossible to bury them in cemeteries within reach of the bombings.

Satellite imaging company Maxar Technologies released photographs purporting to be from a mass grave in a church building in Bucha.

“They said that as long as it was cold, they would leave them there,” he said. When they finally managed to retrieve the bodies, “we dug a mass grave with a tractor and buried them all,” she said.

UN High Commissioner for Human Rights Michelle Bachelet said she was “horrified” by the images.

“The information that is coming in from this region and others raises serious and worrying questions about possible war crimes and serious violations of international humanitarian law, as well as serious violations of human rights,” Bachelet said in a statement, in which she asked that “all evidence is preserved”.

Moscow’s deputy ambassador to the UN said Russia had requested a Security Council meeting for this Monday “on the basis of the atrocious provocation by Ukrainian radicals in Bucha”.

AFP correspondents in the city observed at least 20 bodies in civilian clothes strewn across a street. The images of the massacre provoked worldwide outrage and calls for new sanctions against Russia.

French President Emmanuel Macron has declared that he is in favor of such a decision, for example, against Russian oil and coal.


German Chancellor Olaf Scholz said on Sunday that new sanctions would be decided in the coming days, while his defense minister cited the possibility of cutting Russian gas imports, one of Moscow’s great negotiating assets.

Polish Prime Minister Mateusz Morawiecki called for the creation of an international investigation commission into the “genocide”.

Spain’s Prime Minister Pedro Sánchez said his country would “do everything possible so that those who committed war crimes do not go unpunished”, citing a possible “genocide”.


“Something Terrible Will Happen”

But the Ukrainian president has warned that the worst could be yet to come, as Moscow has turned its attention to the south and east of the country in its attempt to create a land link between the Crimean peninsula – annexed by Russia in 2014 – and the pro-professional separatist regions. -Russia from Donetsk and Lugansk.

“Russian troops still control the occupied areas in other regions. And after the expulsion of the occupiers, we can find even worse things, more deaths and torture,” he said.

Zelensky also attended the Grammys with a pre-recorded speech, in which he requested that people “tell the truth about this war”. “Don’t be silent,” he urged the audience.

The worst conflict in decades in Europe, provoked by the Russian invasion on February 24, left 20,000 dead, according to the Ukrainian balance sheet.

Nearly 4.2 million Ukrainians have fled the country, according to the United Nations High Commissioner for Refugees (UNHCR).

In the city of Kramatorsk, women, children and the elderly boarded three trains to flee the Donbass region. “The rumor is that something terrible is going to happen,” said Svetlana, a volunteer who organizes the crowd on the station’s platform.

Russia has stepped up efforts in southern and eastern Ukraine, including several attacks on Sunday against the Black Sea port of Odessa, which Moscow said hit oil refineries and fuel depots.

Eight people were killed and 34 injured in Russian bombings on Sunday in Ochakiv and Mykolaiv, also in southern Ukraine, the Ukrainian prosecutor’s office said on Monday.

The British Defense Ministry noted that the most recent Russian air strikes were focused on southeastern Ukraine. And intense fighting continues in the Mariupol port area.

The videoconference peace talks are due to resume on Monday, but Russian negotiator Vladimir Medinsky said it was too early for a meeting between Zelensky and Putin.