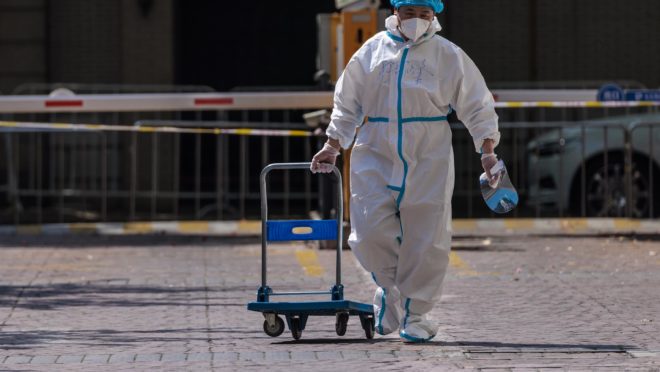 behind the scenes of the lockdown in Shanghai

Abhishek Pratap April 14, 2022 News Comments Off on behind the scenes of the lockdown in Shanghai 11 Views

Actions implemented during the lockdown in the largest Chinese city caused indignation in the population and even generated an international response.| Photo: EFE/EPA/ALEX PLAVEVSKI

Since the beginning of the Covid-19 pandemic, China has adopted a zero-tolerance policy when new outbreaks of the disease are recorded, with strict lockdowns in neighborhoods and even entire cities.

In Shanghai, China’s largest city with around 25 million inhabitants, a lockdown was imposed in some regions on March 28. On April 5, the measure was extended to the entire city.

Honoring the repressive tradition of the Chinese Communist Party, actions implemented during the lockdown caused indignation in the population and even generated an international response.

Chinese authorities on Tuesday lifted part of the quarantine, allowing about 6.6 million people to leave their homes, although many were forced to be restricted to their own neighborhoods.

With more than 200,000 cases in total, the outbreak in Shanghai is already considered the biggest in China since the beginning of the pandemic. Deaths have not been reported, but Chinese statistics on Covid-19 are not taken seriously by foreign experts.

Check out a list of absurd measures adopted during the lockdown in Shanghai:

Hunger while food is thrown away

During the lockdown, the population cannot go out shopping, and food and other supplies are being delivered by the state. But the logistics are so bad that many residents have reported on social media that they are starving. The revolt grew with images of food being thrown away.

An audio of a phone call was released on the internet and went viral: in it, a man calls the police, reports that he has not eaten for days and asks if he will be able to eat in prison if he disrespects the lockdown and is arrested. The policeman replies that the desperate resident would be sent back home, because even the police themselves don’t know where to buy food in Shanghai.

Residents took to the balconies of their apartments to sing and protest the lack of food and other groceries, and in response the government sent drones broadcasting audio to instruct the protesters to go back inside their apartments.

“Please comply with restrictions against Covid-19. Control your soul’s desire for freedom. Do not open the window or sing,” reads the message carried by the drone.

China’s Covid-zero policy mandates quarantine, in hospitals and temporary facilities (already compared by some to concentration camps), for anyone who tests positive for the disease, including children.

Videos of children separated from their parents crying have gone viral on the internet, and the account of a Shanghai resident to the American magazine Time gives a sense of this despair: her ten-year-old daughter was alone in a hospital for five days.

“We made a lot of phone calls. They kept repeating that the children have to go to the children’s ward and that there is a team there to take care of them. But in fact, there was no one taking care of our daughter. All the children in the ward had to fend for themselves. The situation in the ward was a bit chaotic and they [crianças] they barely saw the nurses except at mealtimes,” said yoga instructor Jenny Tao.

She and her husband communicated with their daughter through messages, until a doctor authorized the family’s reunion.

Doctors, lawyers and therapists have posted online criticizing the separation of parents and children, and diplomats from more than 30 countries have sent messages to the Chinese government to protest the measure. An online petition on the subject was censored.

In response, Chinese authorities announced on April 6 that some of the children who tested positive for Covid-19 would no longer be separated from their parents.

In addition to the infamous drone instructing the population to leave the balconies, robot dogs are also being used to preach obedience to the lockdown and adopt measures such as washing hands and wearing masks.

Posts on social media criticizing the lockdown and its aftermath have been censored. Anyone who dares to take to the streets, in areas where the easing has not yet been implemented, is arrested, and videos show violent repression and aggression against Shanghai residents.

Although experts point out that the possibility of domestic animals transmitting Covid-19 to humans is very small, videos taken by inhabitants of China’s largest city show public servants killing and collecting bodies of dogs and cats in the streets, an action that appears to be aimed at preventing that the animals pass the virus on.

A video that caused particular indignation shows a Corgi dog being killed by an employee who works to prevent Covid-19: he chases him through the Pudong district and then kills him with a shovel.

According to the state-run magazine China News Weekly, the owner of the animal explained in an online group that he had to go into quarantine and decided to let the dog loose on the streets so that it could look for food and “not starve to death”.

He hadn’t been able to get anyone to look after the dog during his absence and had no dog food at home. “I never thought that after we parted, he would be beaten to death,” he lamented.