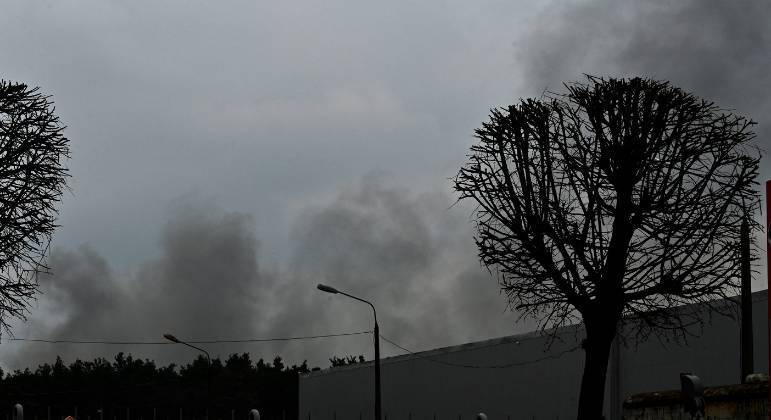 Russia bombed yet another military factory near Kiev on Saturday, fulfilling its threat to step up attacks on the Ukrainian capital following the sinking of the Moskva ship in the Black Sea this week in an attack claimed by Ukraine.

The industrial complex under attack mainly produces tanks and is in the Darnytsky district, according to AFP. A large number of soldiers and rescuers were at the scene, from which there was a lot of smoke, as the agency’s reporters attested.


In Moscow, the Russian Defense Ministry confirmed the attack.

“Long-range, high-precision air-to-ground missiles destroyed the buildings of a factory that produces weapons in Kiev,” the ministry said in a statement issued by Telegram.

Kiev Mayor Vitali Klitschko said on social media that there was no information on possible victims yet.

“This morning Kiev was bombed. There were explosions in Darnytsky, on the outskirts of the city. Rescue teams are currently working there,” Vitali said.

The mayor once again urged residents not to return to Kiev and to remain in a “safe place” outside the capital.

Russian attacks on the Ukrainian capital had slowed since late March, when Moscow withdrew its troops from Kiev and announced it would focus its offensive on eastern Ukraine.

However, on Thursday, Russia suffered a severe blow this week with the fire and subsequent sinking of the cruiser Moskva in the Black Sea, which Kiev says it hit with missiles, while Moscow accuses Ukrainian forces of bombing nearby Russian towns. from the border.

Russia, however, continues to say that the cruiser sank due to a fire caused by the explosion of its own ammunition and that the crew of about 500 men was withdrawn.

On the other hand, a Ukrainian official rebutted this information. “A storm prevented the rescue of the ship and the evacuation of the Russian crew,” said Natalia Gumeniuk, a spokeswoman for Ukraine’s southern military command.

“We are perfectly aware that they will not forgive us,” continued Natalia, referring to Russia and possible new attacks.

In a possible response to the sinking, bombing near Kiev resumed on Thursday night when a Neptune missile factory – the ammunition used to sink the Russian ship Moskva, according to Ukraine – came under attack. of Moscow and was partially destroyed.