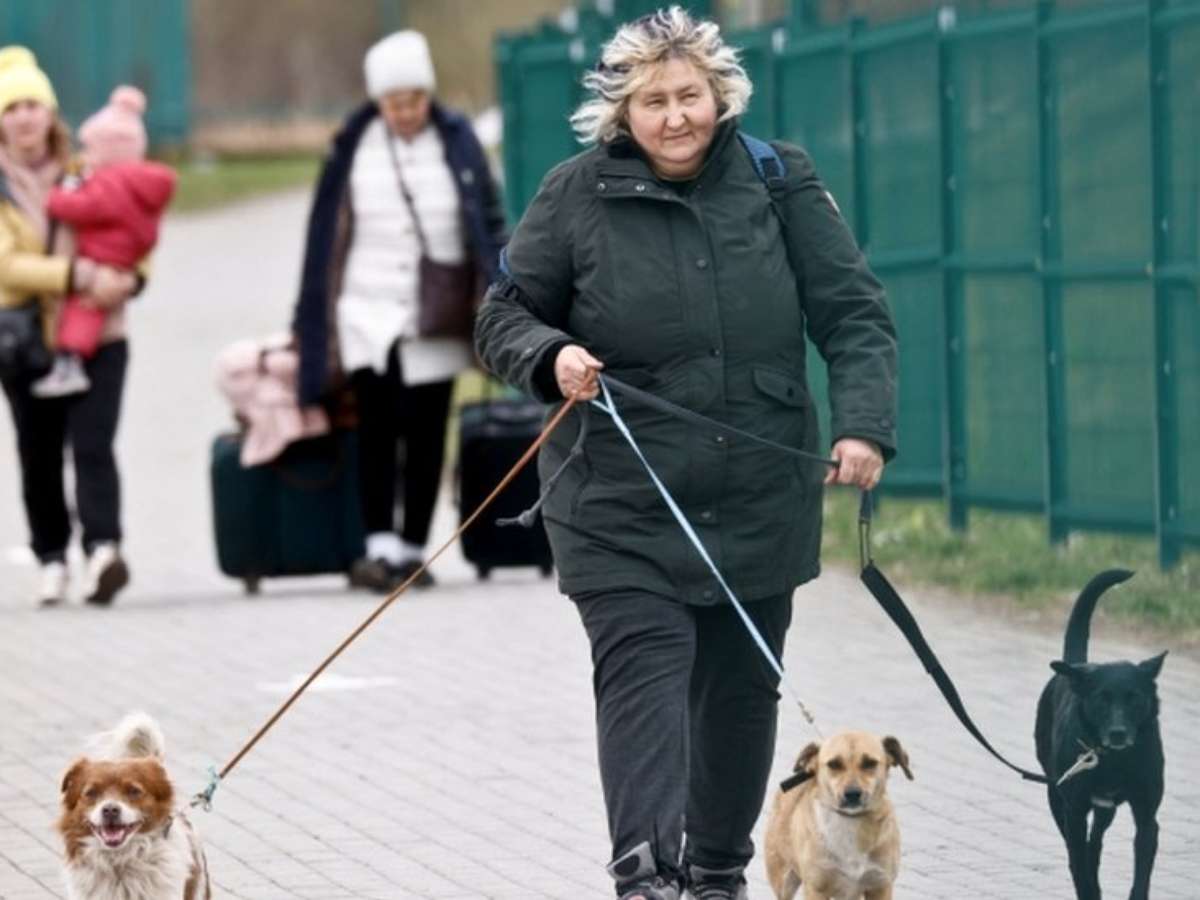 Abhishek Pratap April 16, 2022 News Comments Off on Ukrainians who fled the war begin to return to the country even amid the fighting 13 Views

On Ukraine’s western border with Poland, near the town of Mostyska, Ukrainians Olena and Maria walk towards their country after a month and a half away. Both are from Slovyansk, in the east of the Donetsk region.

On March 10, as Russians were approaching the city, Olena’s husband asked her to leave the country with their daughter. Olena and Maria went to a friend’s house in the Polish city of Szczecin, on the border with Germany.

But they had to sleep on the floor. And Olena says they had a hard time finding a job because they don’t speak Polish. Now they are returning to eastern Ukraine, despite the threat of further Russian attacks in the region. Olena’s husband is an ambulance driver and remains in Slovyansk, waiting for them.

When we asked what they were feeling when they returned to their country, Olena broke into a smile. “Very good! Regardless of anything, we are very happy to be back in Ukraine.”

Since the Russian invasion, it is estimated that more than 10 million people have left their homes in Ukraine, and 4.3 million of them have fled the country. But as the front lines stabilize and the country learns to operate in a state of war, some Ukrainians are starting to make the journey home, even to areas directly threatened by Russian forces.

The war enters for the second month. Ukraine managed to avoid a quick takeover of the country by Russia and prevented them from invading the capital, Kiev. Ukrainian President Volodymyr Zelensky reminded the public this week that 48 days have passed since European and American military analysts predicted that Kiev had only 48 hours to be completely dominated by the invaders.

People the BBC spoke to at the Polish border said they were tired of refugee life. Others were desperate to return due to practical reasons – to collect important documents left behind in the scramble of the invasion, protect their homes from looters or even pick up children left in the country.

And for some, the attachment to home, friends and family is simply too strong. Sofia is eating a hot dog from one of the food stalls on the border. She is defying her mother’s orders by choosing to return to Ukraine after spending three weeks safely in Poland. War is war, but Easter is Easter – she wants to see her family over the weekend.

The 20-year-old crossed the border into the European Union in late March to stay with a friend of her grandmother’s in Poznan after the Russians bombed her hometown.

“My mother made me, she was in a panic,” says Sofia. But she hasn’t gotten used to life outside her country, despite aid for refugees that humanitarian groups and the Polish government organized.

“You feel like a foreigner,” she says. “Everyone is helping you, but you don’t feel at home.” She hopes to settle in the city of Lviv, which for now is relatively quiet amidst the war.

Official data suggests that more people are making the same decision. Polish border officials say the numbers of those leaving and entering Ukraine are approaching. On Wednesday (13/4), 24,700 people entered Poland from Ukraine, while 20,000 went the opposite way. It’s a big change compared to the record 142,000 people who crossed the border into Poland on March 6.

The Lviv-Holovnyi train station is key to facilitating the transit of people in western Ukraine. Trains bring thousands of people to Lviv from war-torn regions. Outside the station, charities deliver food, clothes and cellphone chips, while buses line up to take travelers into the countryside or the border.

Although most people arrive here from the east, a growing group is beginning to make the journey in the opposite direction – a potentially fatal choice.

Iryna, her daughter Katerina, mother Lina and mother-in-law Yevgenya are from Kryvyi Rih, a town in central Ukraine near the battle lines. They initially left the country to stay with relatives in Moldova, but decided to return. They had to buy tickets for the trip, as they were heading east. Westward journeys are offered free of charge.

Iryna says she would have liked to go back sooner, but had to wait for her 8-year-old daughter to recover from an illness. “Home is home,” she says, when we ask why they decided to come back.

She admits that she worries about her daughter’s safety. We asked what they said to Katerina about the situation. “We tell the truth,” says Iryna.

Some warn against returning to eastern Ukraine. Volunteers at a clinic located above the station’s main concourse provide medical advice and psychological support to newcomers. Irena Bous is one of them.

Before the war, she was a juror for the International Dance Organization and organized competitions across Ukraine. “There were all kinds of dances, from hip hop to jazz and break,” she says.

A friend of hers in the Lviv governor’s office learned that she was good with organization and asked her to help after the Russian invasion. Irena has met several people who are returning to areas marked by the violence of war. “It’s a bad idea (to return to the east)”, says Irena, “We tried to save their lives by keeping them in Lviv”.

She told us about a woman who came to Lviv from her home near Bucha, a wealthy Kiev suburb where Russian troops murdered civilians and left their bodies on the streets. After nine days, she decided to return, against Irena’s advice.

“I said, ‘please wait, there are no more Russians there, but there are other things, like bombs and mines. Wait until they are deactivated,'” says Irena. The woman traveled back anyway, saying friends had found her a place to stay.

Another woman Irena spoke to, who is in her 60s, had fled to Poland before the war started but returned to Ukraine and boarded a train eastward last week. “I don’t know how long I’m going to live, but I’m going to die in my house,” she told Irena.

Others we know never left Ukraine. At Arena Lviv, a stadium built for the Euro 2021 football tournament but now housing refugees, we meet Roma, a 19-year-old from Mykolaivm on Ukraine’s Black Sea coast, and his new friend Iryna, a grandmother from Severodonetsk. , in the Luhansk region.

The two had never met until that day, but they had decided to stay together. Iryna crossed Ukraine to the Polish border in the days following the invasion, with the idea of ​​fleeing the war. After standing in line for hours to cross the border, she changed her mind at the last minute.

Her son is in the Ukrainian Army and she learned that her town had been recaptured by Ukrainian forces, which paved the way for her to return home.

“I couldn’t convince myself to leave (the country),” she said. But since then, Iryna has been roaming western Ukraine—she once slept in a daycare in Lviv, before ending up in the Lviv Arena with Roma.

A bus heading inland had a spare seat, but despite repeated offers, Iryna refused to board and decided to stay with her new friend. Now she and Roma, like millions of others, face the uncertain future of homeless people at home.

With the choice of having refugee status abroad or living without roots in Ukraine, it is not surprising that some are risking their lives to return to their homes.