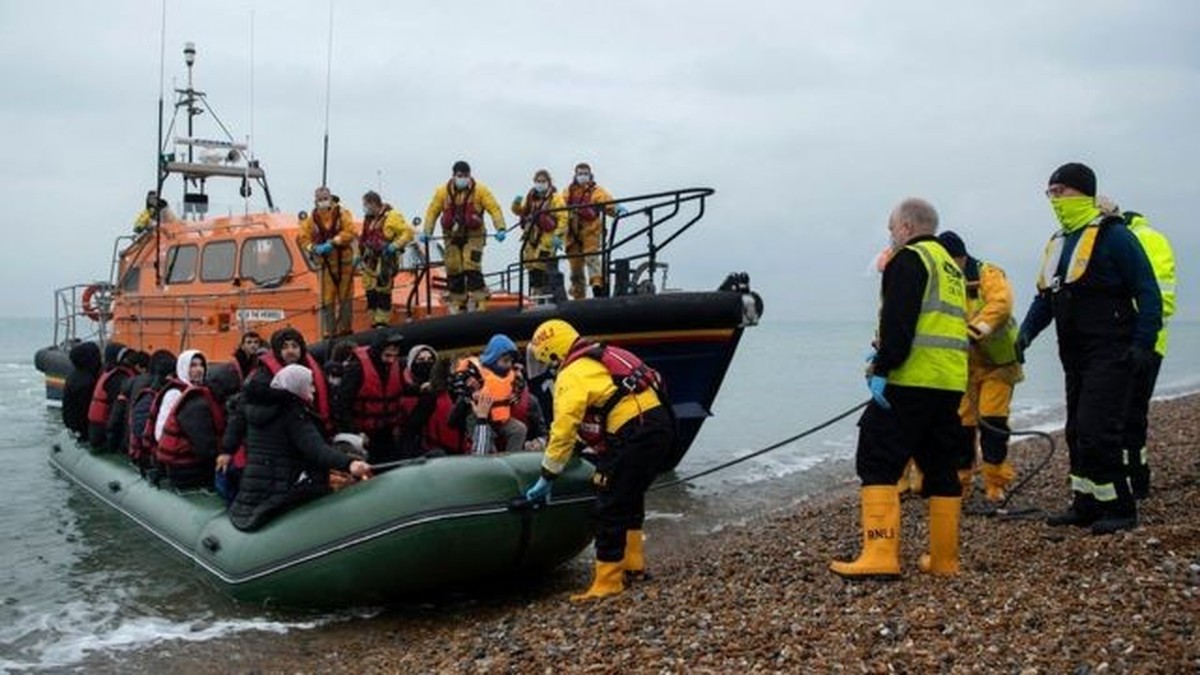 Some asylum seekers in the UK will be transferred to Rwanda – more than 4,000 miles away – under the British government’s new plans.

The controversial program is part of a set of tougher government measures to reduce the number of asylum seekers arriving in the country in small boats through the English Channel.

Home Secretary Priti Patel is in the African country to sign a $150 million deal that involves testing the scheme with single men arriving in the UK.

In a speech on Thursday, British Prime Minister Boris Johnson confirmed the program, saying it was necessary to “save countless lives” and prevent “human traffickers” from turning the ocean into a “water graveyard”.

He said that under the new scheme, anyone arriving in the UK illegally could be “relocated” to Rwanda.

“This policy has no limits,” Johnson said. He added that Rwanda has increased its capacity to receive immigrants in recent years by “tens of thousands of people”.

“We cannot maintain an illegal parallel system,” Johnson said. “Our compassion may be infinite, but the ability to help people is not.”

Just last Wednesday (13/4), about 600 asylum seekers crossed the Channel and, according to Johnson, the number could reach 1,000 a day in the coming weeks.

The BBC has seen the housing these individuals will be placed in, which is believed to have room for around 100 people at a time and process up to 500 immigrants a year.

The new program has been widely criticized both by humanitarian groups, who called the plans cruel, and by opposition parties, who say it will be “impractical, unethical, wasteful and ineffective”.

Opposition parties also understand that the annual cost of the entire plan would be much higher than the initial payment of $150 million and have raised concerns about Rwanda’s human rights record.

Distance from the UK to Rwanda is 6,500 kilometers (Photo: BBC)

Precise details of the project are yet to be confirmed, but there is information that the testing program will be limited primarily to single men.

Under the proposal, Rwanda would assume responsibility for people who make the journey of more than 6,500 km, put them through an asylum process and, in the end, if successful, these individuals would have long-term accommodation in the country.

The Rwandan government has indicated that immigrants will be “entitled to full protection under Rwandan law, equal access to employment and enrollment in health and social services.”

The UK Home Office believes the existing asylum law will be sufficient to implement the scheme, but doubts remain about the legality of the decision.

Questions were also raised about the human rights record of the Rwandan government and its president, Paul Kagame.

Several of its critics died or were victims of assassination attempts, but Rwanda has always rejected suggestions that the government was involved in these episodes.

There are also concerns about the terrorism conviction of Paul Rusesabagina, who was portrayed in the film Hotel Rwanda for his role in saving over 1,000 people during that country’s 1994 genocide.

Last year, the UK government itself expressed concern at the United Nations (UN) about the “ongoing restrictions on civil and political rights and freedom of the press” in Rwanda, calling for independent investigations into “allegations of extrajudicial executions, deaths in custody , enforced disappearances and torture”.

The partnership with Rwanda is the centerpiece of a broader political campaign to address what has been a humiliation for ministers who promised that Brexit would mean control of the UK’s borders.

Instead, a record number of asylum seekers have shown up on boats on the white cliffs of Dover, off the coast of the country.

This year there were 4,578 arrivals and everything indicates that this will represent a new record.

However, sending asylum seekers to Rwanda is likely to be highly controversial and legally difficult.

Critics point to Rwanda’s poor human rights record. Last year, the UK demanded at the UN that the alleged murders, disappearances and torture be investigated.

Ministers will have to explain why Rwanda is the right place to entrust the protection of the human rights of vulnerable asylum seekers who expected the UK to protect them.

Activists highlight the negative impact on the human rights of refugees, the cost of the scheme and question whether the plan will be able to achieve the proposed objectives.

Enver Solomon, executive director of the Refugee Council, said the proposal did not address the reasons why desperate people travel to the UK.

Amnesty International UK described the plan as a “surprisingly ill-conceived idea” that would waste public money.

The Liberal Democratic Party declared that the government was “closing the door” on refugees, while Ian Blackford of the Scottish National Party described the plan as “absolutely terrifying”.

Is it legal to send asylum seekers to Rwanda?

The British government wants to introduce new laws aimed at making it easier for the UK to send refugees to another country so that the asylum application can be processed elsewhere.

The country is also a signatory to two important international treaties that guarantee the rights of refugees and asylum seekers:

Therefore, if there is a risk that a person will be mistreated in Rwanda, he cannot be sent there.