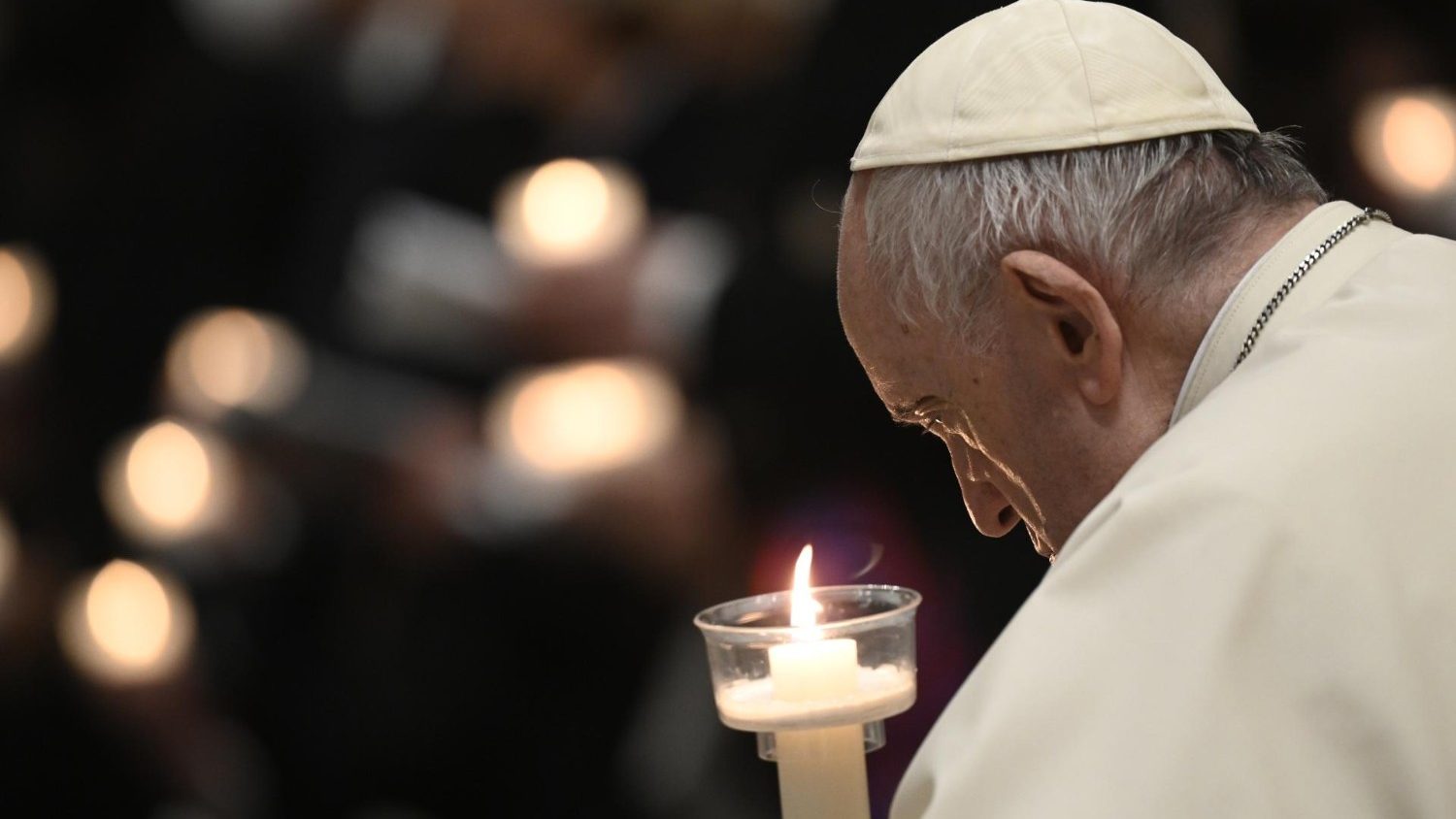 Easter Vigil: With Jesus, no night is infinite, says Pope

The Easter Vigil was presided over by Cardinal Giovanni Battista Re and the Pope read the homily. The Mass was preceded by the suggestive rite of the blessing of fire in the Atrium of the Basilica and by the subsequent procession to the sound of “Lumen Christi”. Seven catechumens of different nationalities (Italian, American, Cuban, Albanian) received baptism. At the end of the homily, Francis said in Ukrainian: “Christ is risen”

The shadows and lights that mark the Easter Vigil Mass, with the blessing of the fire and the lighting of the candle, were also reflected in the homily given by Pope Francis in Saint Peter’s Basilica, which soon began with a reference to the ongoing conflicts.

“The nights of war are crossed by luminous trails of death. Tonight, brothers and sisters, let us allow ourselves to be guided by the women of the Gospel, to discover with them the dawn of God’s light that shines in the darkness of the world”, said the Pope.

Francis proposed three actions of the women who, first, witnessed the Passover of the Lord: seeing, listening and proclaiming.

In the cemetery, the women do not see the body of Jesus. In other words, Easter begins by inverting our schemes, the Pope said. Therefore, it is not easy to accept it. It comes with the gift of surprising hope, which sometimes finds no place in our hearts.

“And so we remain motionless before the grave of resignation and fatalism; we buried the joy of living. But tonight, the Lord wants to give us different eyes, enlightened by the hope that fear, suffering and death will not have the last word over us.”

The risk of a “Christianity without Easter

In second place, women listen of two men in resplendent garments: «Why do you seek the living among the dead? Is not here; is risen!” (24, 5-6).

For the Pontiff, it is good to hear and repeat these words whenever we look for him in passing emotions or in moments of need, when we confine him to formulas and traditions, but we do not look for him in those who cry, struggle, suffer and wait.

“We cannot celebrate Easter if we continue to dwell in death”, said the Pope.

“A Christianity that seeks the Lord among the ruins of the past and encloses Him in the grave of routine is a Christianity without Easter.”

Finally women advertise the joy of the Resurrection.

“How beautiful is a Church that runs like this along the roads of the world! No fear, no tactics or opportunism; only with the desire to bring to everyone the joy of the Gospel. To this we are called: to experience the Risen One and share it with others.”

“Brothers and sisters, our hope is called Jesus. (…) Let’s make Easter with Christ! He is alive and even today he passes, transforms and frees. With him, evil no longer has power, failure cannot prevent us from starting over, death becomes the gateway to the beginning of a new life. Because with Jesus, the Risen One, no night is infinite; and even in the thickest darkness, the morning star shines.”

At the end of the homily, the Pope addressed the mayor of Melitopol, Ivan Fedorov, present at the Basilica in the company of Ukrainian parliamentarians, whom he had already met before the celebration: “In this darkness that you live, Mr. war and cruelty, we all pray with you tonight, we pray for the many sufferings. We can only offer our company, our prayer and say to you: courage, we accompany you. celebrates: Христос воскрес! (Christ is risen).

The celebration continued with the rite of baptism for seven catechumens.