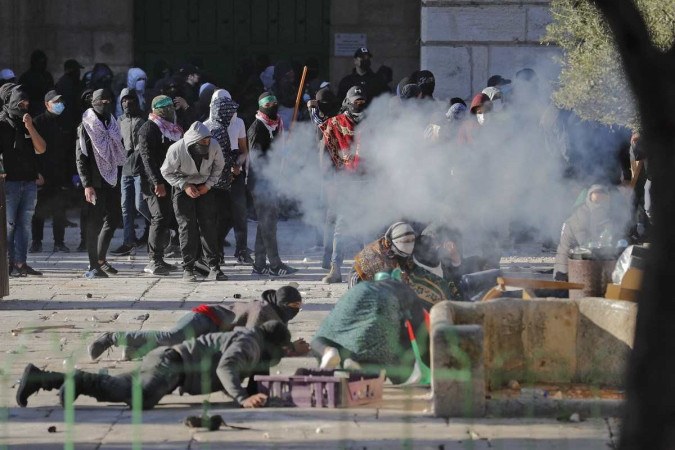 It happened again, this time on the second Friday of Ramadan — the holy month for Islam in which Muslims observe absolute fasting from sunrise to sunset. Israeli police raided the Mosque Esplanade in Jerusalem’s Old City at around 6:30 am (0:30 am GMT). The site is home to the Al-Aqsa Mosque, the third holiest place for Muslims. According to Israeli police, an hour and a half earlier, “dozens of young hooded hooligans”, some with the flag of the Islamist movement Hamas, “started a procession” through the complex and reportedly threw stones towards the Western Wall. pilgrimage site and the remaining wall of King Solomon’s temple.

Clashes between Jewish state security forces and Palestinians left 158 ​​injured, six of them seriously. The Israeli military also detained 450 protesters. On May 20, 2011, a similar incident on the Esplanade of the Mosques left 331 injured.

On condition that his identity not be revealed, Mahmud (not his real name) told the Correio that he arrived at the Mosque Esplanade minutes after the Israeli forces had entered. “After the dawn prayers, hundreds of worshipers gathered in the mosque square and started shouting that the place belongs to Muslims. It was then that a large number of policemen invaded the place, using stun grenades and rubber bullets. Israelis started chasing people and hitting them with clubs to force them to leave the compound,” he reported. “Some youths threw stones and entered the Al-Aqsa Mosque. The police locked the place with iron chains and threw the stun grenades through the roof after breaking the windows. The clashes continued for three hours.”

The police took 450 Palestinians arrested. After the arrests and the departure of the Israelis from the area, the worshipers cleaned the Al-Aqsa Mosque. At least 60,000 Palestinians came to the temple for Friday prayers, considered a holy day for Islam. Israeli police said three members of their troops were injured. Al-Aqsa Mosque director Omar Al-Kiswani confirmed to Agence France-Presse a second incident in the morning involving an intervention by Israeli police at the place of worship itself. “The occupation (the name given to Israel by the Palestinians) knows that the Al-Aqsa Mosque is a red line that must not be crossed,” he declared.

The Post also spoke to Palestinian freelance journalist Hassan Asleh, who was praying at the Al-Aqsa Mosque when the riot broke out. According to him, about 30,000 worshipers were at the temple, responding to a call from Hamas to protect the site against an alleged desecration planned by Jewish settlers, who also celebrated Pesach (Jewish Passover) yesterday. “A large number of young people took the initiative to set up barricades and prepare to repel any incursions by the police or settlers,” Asleh commented.

“The youths armed themselves with rockets to respond to tear gas and rubber bullets fired by Israeli forces, which were on standby at the doors of the Al-Aqsa Mosque,” explained Asleh. As the riots raged, Israeli Prime Minister Naftali Bennett was meeting with the emergency security cabinet to assess the situation in Jerusalem. The newspaper Haaretz reported that Kobi Shabtai, the chief of police, told the meeting that his men had avoided doing anything to invade the Esplanade of the Mosques. “We asked the local guards to take care of the rioters and remove them from the Temple Mount, but to no avail,” he commented.

The US government said it was “deeply concerned” by yesterday’s incidents on the Esplanade of the Mosques. “We urge all parties to exercise restraint, to avoid provocation and rhetoric,” State Department spokesman Ned Price said in a statement. “We urge the Palestinian and Israeli authorities to cooperate to defuse tensions and ensure everyone’s safety,” he added.

In an interview with Correio, Ibrahim Alzeben, Palestinian ambassador to Brazil, stated that “the continuation of the Israeli escalation has reached a level that threatens regional security and social peace in the world”. “It turns the conflict into a religious war, from which no one will be spared the devastating consequences, both in the East and in the West”, warned the diplomat. He urged “immediate, urgent and decisive action” by the international community to “stop this deterioration and eliminate its causes”. “No more double standards. In Palestine, the main cause is the occupation — a source of terror and violence. The conflict has lasted 74 years. The world sees and hears, but it turns its face away from the truth,” he added.

For Alzeben, the recent dangerous incidents recorded in the Middle East “were caused by the occupation of the land of Palestine, by the brutal aggressive practices of the Israeli occupation authorities, by the murders and arrests against the Palestinian people and by the massive and destructive incursions in Palestinian cities, villages and and camps”. “The Israeli government is responsible for all victims resulting from this bloody series that threatens the lives of Palestinians and Israelis alike,” he concluded. The report tried to contact the Israeli ambassador, but got no response.

The clashes on the Esplanade are the first to be recorded this year during Ramadan, when thousands of Palestinians visit Jerusalem to pray at the Al-Aqsa Mosque.

The Esplanade of the Mosques is located in East Jerusalem, part occupied by Israel since 1967 and which the Palestinians claim as the capital of a future state. The riots are part of an escalation of violence registered in recent weeks in the Middle East, with shootings and knife attacks in Tel Aviv and bloody clashes between Israeli forces and Palestinian protesters in the West Bank. On Thursday, three Palestinians died during an Israeli Defense Forces operation to round up suspects linked to four bombings in Tel Aviv that have left 14 dead since March 22.

On Thursday morning, “two youths died of injuries sustained in an Israeli attack in the Jenin district” in the northern West Bank, the Palestinian Health Ministry said in a statement. Hours later, the same ministry announced a third death — a 45-year-old man, a father of six, who had been seriously wounded by Israeli bullets the day before in Beita, south of Nablus.

In a statement, the Israeli Embassy in Brasilia said that Israel is committed to freedom of worship for people of all faiths in Jerusalem, and that its goal is to enable peaceful prayers for the faithful during Ramadan. “Yesterday (Friday) morning, dozens of masked men, with Hamas flags, began to march on the Al-Aqsa Mosque, chanting incitement and, barricaded inside the mosque, rioted, vandalized property, set off fireworks and threw stones”, says the diplomatic representation. “There is no reason for this violence and for the destruction of the mosque under the pretense of protecting it. The rioters are undermining the sanctity of the mosque and the month of Ramadan. With the rioters withdrawn, the Temple Mount has been reopened to the faithful. , to allow freedom of worship. The convergence of Jewish Easter, Ramadan and Christian Easter is something symbolic of what we have in common. We must not let anyone turn these holy days into a platform of hatred, incitement and violence”, adds the embassy.