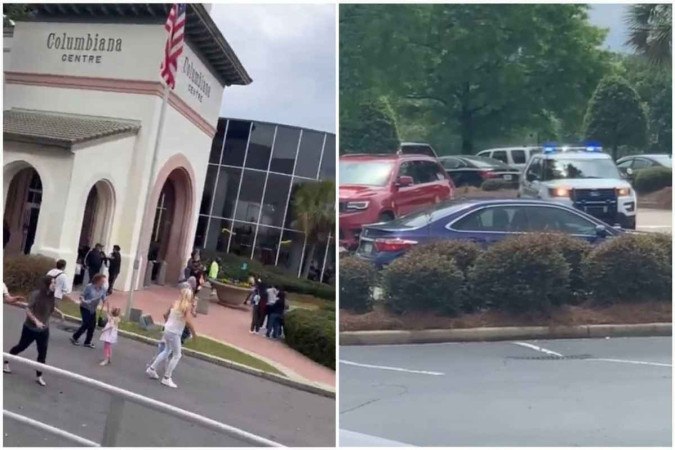 Shooting at US mall leaves 12 injured; police work on site

Abhishek Pratap 4 weeks ago News Comments Off on Shooting at US mall leaves 12 injured; police work on site 7 Views


Part of the locals who were close to the exit managed to leave the mall on Columbia at the time of the shooting. Police are still working to safely remove other people — including employees — (Credit: Social Networks/Reproduction)

Hundreds of people walking through a mall in Columbia, USA, this Saturday (16/4), had the day violently interrupted: shots fired inside the place left 12 injured and several arrested in stores. In a press conference, the police said they still work at the Columbiana Center and asked employees and visitors to inform where they are so that agents can find them and remove them safely from the place.

“This is preliminary information. We have 12 wounded, ten were shot and two were injured in the attempt to flee the scene. Two of those shot are in critical condition. There are still no reported deaths,” said Columbia Police Chief Skip Holbrook. Those shot are between 15 and 73 years old.

The police officer also informed that three people are being detained, but none of them had firearms. According to Skip, detainees are seen as people who can give information and not as suspects. The police department does not believe the shootings were accidental or random.

At the moment, rescuers are working to remove employees and workers from the site. “It is a very large mall and we are releasing the areas little by little. We’re releasing people and taking them to a reunification center next to the mall. Friends and family who want to know about relatives can be there or call our call center,” Skip added.

The avenues leading to the mall were also blocked and the police asked that “the public stay out of the mall area”. Police began receiving numerous distress calls around 3:28 pm (Brasilia time). The whistleblowers claim the shootings took place near a GAP store.

COLUMBIA MALL SHOOTING: Officers have roads closed down all around the mall. Here’s a look at the scene. Again CPD say multiple people were hurt in a shooting. Still awaiting the number of people and their conditions. pic.twitter.com/LAh2lU5Voi


The administration of the Columbiana Center regretted what happened. “Today’s isolated and senseless act of violence is extremely disturbing and our thoughts are with everyone. We are grateful for the prompt response and continued support of our security team and our law enforcement partners,” they said in a press release.

Two-time world champion jiu-jitsu athlete Guybson “The Spartan” was at the scene with his two daughters when the shooting took place. He claims the shots lasted between 8 to 12 seconds. On social media, he shared a video shortly after he managed to leave the place, in which some people are panting from running from the shots.

“The scariest situation I’ve ever been in with my two daughters. It felt like a storm for about 8 to 12 seconds and people started falling like crazy as they ran desperately.”

“I’m not sure what happened, but I hope everyone is okay. There are already over 100 first responders in sight and we are getting out of here,” she added.

On Twitter, a user identified as Zae shared that he was at the scene and managed to leave the mall right at the beginning of the shooting. “I was taking pictures with the Easter Bunny and saw a ton of people running towards my family and I had to grab my younger siblings and leave,” he wrote in response to a tweet from the Columbia Police.

“People started screaming, which made me aware of what was going on. Crazy Saturday and I hope everyone affected is safe,” she added.