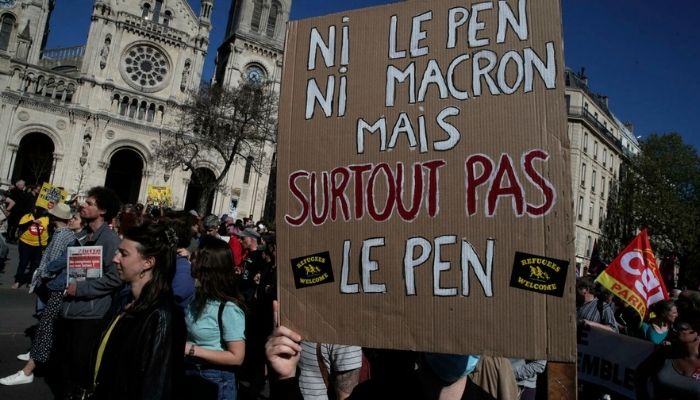 Thousands take to the streets against the far right in France

Abhishek Pratap April 17, 2022 News Comments Off on Thousands take to the streets against the far right in France 5 Views

Thousands of protesters took to the streets of at least 30 cities in France this Saturday (16) in marches against the far-right candidate, Marine Le Pen, who will contest the second round of the presidential election against Emmanuel Macron on the 24th.

A poll published on Saturday by the Ipsos institute showed that if the election took place today, Macron would win re-election with 55.5% of the vote, against 44.5% for Le Pen.

In central Paris, thousands of people gathered and chanted against the candidate and said that the country’s democracy was at risk. One banner read: “Against the far right. For justice and equality. Not Le Pen in [palácio do] Élysée”, referring to the official residence of the French president.

“If the extreme right is in power, we will see a major collapse of the democratic, anti-racist and progressive camps,” said Dominique Sopo, president of SOS Racismo, which convened the protests alongside dozens of human rights groups, unions and associations. “People need to realize that, despite their anger at Emmanuel Macron and his policies, there is no equivalence between a liberal and conservative candidate and a far-right candidate,” he said.

In front of the prestigious Institute of Political Science, about 150 students blocked the entrance to the center on Thursday, with banners that read “No to the far right” and “There are no neighborhoods for fascists, there are no fascists in our neighborhoods.”

Police had warned of possible incidents, but the protests ended peacefully.

At a rally in Marseille, Macron, who is trying to win the favor of left-wing voters, said on Saturday that “the far right is a risk to our country.” In the city, leftist candidate Jean-Luc Mélenchon took first place in the first round on April 10.

Le Pen, at a campaign event also in the south of France, called the protests undemocratic. “The establishment is worried,” she said. “That people are protesting the election results is deeply undemocratic. I tell all these people to go and vote. It’s as simple as that.”

Before the first round of the election, Le Pen managed to use to his advantage the dissatisfaction of the French population with the rising cost of living and the perception that Macron is disconnected from the daily difficulties of the people. With that, she finished the first round with 23.1% of the vote, compared to 27.85% for Macron.

With the electorate fragmented and indecisive, the election is likely to be won by the candidate who can convince voters that the other option will be worse.

For decades, a Republican front made up of voters from all walks of life has managed to keep the far-right out of power by supporting popular candidates. But there are doubts as to whether Macron has that support, after a term with policies leaning to the right and fraught with conflict. This Saturday, for example, part of the protesters carried banners in Paris that read “Neither Le Pen nor Macron”.

“This election leaves us no choice between a far-right candidate with disgusting ideas and a candidate who for five years put the ecological issue aside and lied,” said a history teacher identified as Lou, 26, who spoke with the group. environmentalist Extinction Rebellion.

In Marseille, Macron focused on the environmental agenda. “The policy that I’m going to promote over the next five years will be ecological,” he said. He promised to make France the first “great nation to come out of oil, gas and coal” and to appoint a prime minister in charge of the environmental agenda. He also stated that he will invest in renewable technologies and organic food and that he wants to improve the energy efficiency of homes.

Both candidates are now trying to seduce the electorate that voted for the leftist candidate Jean-Luc Mélenchon, who came in third in the first round of last Sunday’s elections. The leftist electorate brings together different groups, especially young people between the ages of 18 and 24 who are aware of global warming and agendas such as feminism and anti-racism.