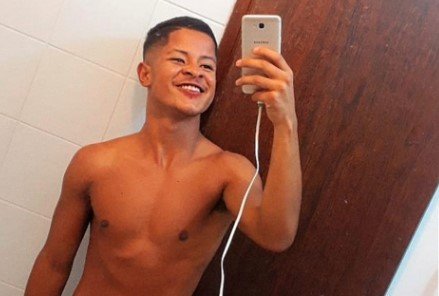 The Federal District Court converted the arrest of José Felipe Leite Tunholi (main photo), 19 years old. The decision was given in a custody hearing held on the morning of this Sunday (17/4). The suspect confessed that he stabbed TV Globo journalist Gabriel Luiz, 28, during a robbery on Thursday night (14).

According to Tunholi, he attacked because the reporter “outlined a reaction”. So, he started stabbing him until Gabriel Luiz “stopped reacting”. The young man was accompanied by a 17-year-old boy. They were arrested shortly after the crime.

In a press conference held on Friday night (4/15), delegate Douglas Fernandes, from the 3rd Precinct (Cruzeiro), explained that the authors took R$ 250 from the reporter.

“There was the subtraction of the wallet, from which the authors took R$ 250. They waived the cell phone because they knew they could be traced. With that, the other lines of investigation are, for now, discarded”, highlighted the delegate.

The two young men told the police that they did not know who Gabriel was. After consuming Rohypnol, they saw the journalist as a potential victim and decided to rob him. “They said they used a lot of drugs and decided to commit a robbery. The smaller one was even stabbed by the older one accidentally, while holding Gabriel. He went to the hospital, and later, the mother of a friend of his decided to file a police report, because he lied saying that he had been the victim of a robbery. We are suspicious, because it would be rare for two very similar crimes in the same region to have occurred at practically the same time. We realized he was lying,” Douglas explained.

See the moment José Felipe arrives at the police station:

The crime took place around 11:20 pm. Gabriel Luiz was returning home, when he was followed by the two suspects. They surrounded him and delivered about 10 blows. The aggression only stopped because a neighbor saw the scene and screamed.

The action was recorded by security cameras. The doorman narrated that he was in the gatehouse of the condominium, when he noticed the victim approaching.

After undergoing surgeries this Friday morning and morning, Gabriel Luiz managed to write a note and deliver it to the medical team at the health unit. According to members of the team that follow the reporter’s clinical condition, shortly after his father’s visit, Gabriel made drawings of hearts and the words “I love you”, and gave it to a doctor.

He was transferred to the ICU of Hospital Brasília, in Lago Sul, around 2:40 pm this Friday. The journalist will remain hospitalized at the health unit until full recovery.

She's our PC girl, so anything is up to her. She is also responsible for the videos of Play Crazy Game, as well as giving a leg in the news.
Previous Isolated actions mark latest clashes between Israel and Palestine – News
Next USA. Young autistic man who disappeared in 2019 found alive